Once again, the USA settled for a 2-2 tie at the SheBelieves Cup, drawing with England in their second game in the four-team tournament on a chilly Saturday afternoon in Nashville, Tennessee. Phil Neville's Lionesses showed why they are the No. 4-ranked team in the world, going at the top-ranked Americans with confidence. 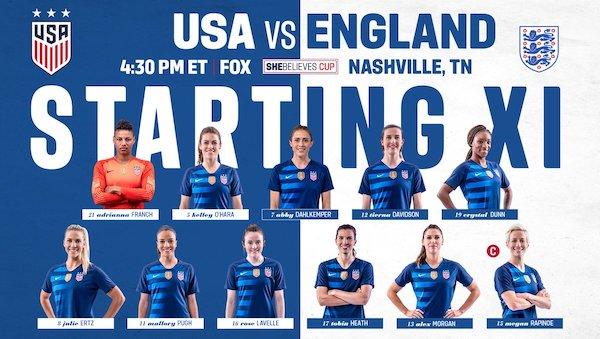 USA Player Ratings
(1=low; 5=middle; 10=high.)
GOALKEEPER
With Alyssa Naeher held out because of soreness in her shoulder, 28-year-old Adrianna Franch, the 2018 NWSL Goalkeeper of the Year, earned her first cap and had a game she will quickly want to forget. She was whistled for picking up a back-pass and on the ensuing indirect free kick was beaten to the far post by Steph Houghton in the 36th minute. Franch was not helped by her tentative backline and beaten to her right side on the second England goal scored by Nikita Parris.

DEFENDERS
The USA will not win the World Cup with defensive performances like it has gotten in its first two games at the SheBelieves Cup. Abby Dahlkemper hesitated on Mallory Pugh's backpass, complicating what should have been an easy clearance on the play that led to the England goal in a first half the USA otherwise dominated. When Fran Kirby flicked the ball on to Parris on the right side, Crystal Dunn and Tierna Davidson were exposed and Parris cut in to beat Franch for England's go-ahead goal. Dahlkemper was very fortunate that Ellen White missed in the 62nd minute after she took the ball away from the U.S. center back just outside the penalty area.

MIDFIELDERS
The USA sure misses Lindsey Horan. For the second game in a row, Mallory Pugh started in place of the injured Portland Thorns star and was again ineffective, repeatedly turning the ball over with her errant passes. Rose Lavelle stayed in the game after landing awkwardly on her knee in the first half but was not much of a factor in the game. Julie Ertz was forced to drop deeper, often playing like a third central defender, and she was almost rewarded for her heroic work when she just missed on a header that would have put the USA ahead in the 77th minute.

FORWARDS
Megan Rapinoe's volley left England's California-born keeper, Karen Bardsley, with no chance on the first goal, and Tobin Heath finished off a wild scramble in front of the England goal to even the score in the 67th minute. Alex Morgan's 100th goal proved elusive -- she missed on a good look in the 48th minute -- but she was otherwise a force in the U.S. attack, linking up well with her teammates and drawing the England defense apart with her runs.

SUBSTITUTES
With the game coming apart around the hour mark, U.S. coach Jill Ellis made three changes that brought order to the game. The big change was the introduction of Sam Mewis, who immediately brought energy and balance to the midfield. Heath also moved into midfield after Christen Press came on for Pugh, and the backline was reshuffled after Becky Sauerbrunn replaced Kelley O'Hara. Sauerbrunn had sat out the 2-2 tie against Japan in the tournament opener with an injury and had been described by Ellis on Friday as "highly unlikely" to play against England.