Jozy is staying in Toronto: 'This is my family, this club and this city' 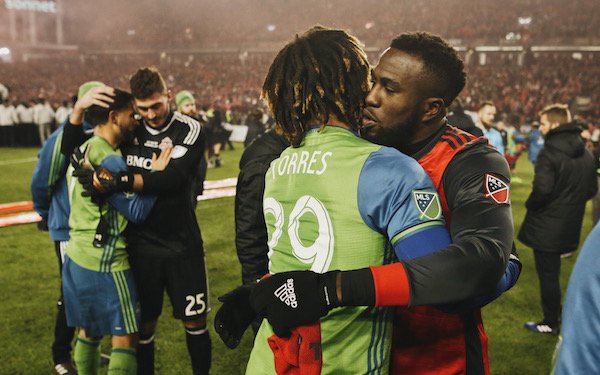 “This is my family, this club and this city,” he said. “The fans, from the first day, they accepted me, they gave me the right to show what I’m all about, and they took me in. We’ve built something great together and I’m really eager to see what’s to come.”

Bradley arrived in 2014, and Giovinco and Altidore came in 2015 when Toronto FC still had not reached the MLS playoffs its first eight seasons. By 2016, TFC was hosting MLS Cup, which it lost to Seattle in a shootout.

The Reds got their revenge in 2017, beating the Sounders, 2-0, in the MLS Cup to cap a treble championship season. In 2018, they started off by reaching the Concacaf Champion League final but then collapsed, winning just 10 of 34 MLS games and falling to ninth place in the Eastern Conference.

Just how far TFC has fallen was evident in the first round of the 2019 Concacaf Champion League, where it fell, 5-1, on aggregate, to CAI, a provincial Panamanian team with no previous international experience.

Altidore was a big part of Toronto FC's 2017 MLS championship season. His goal clinched the semifinal series against Columbus, and he scored the first goal in the final against Seattle, earning MLS Cup MVP honors.

Altidore has 60 goals and 20 assists in 114 games for TFC across all competitions (MLS, MLS Cup Playoffs, Concacaf Champions League, Canadian Championship and Campeones Cup). He was injured in the final of the 2018 Concacaf Champions League against Guadalajara and missed all of April, May and June after having bone fragments removed in his foot. After the season, he had ankle surgery but has yet to play in 2019.

“I love playing at BMO Field, it’s no secret,” he said. “I love scoring goals there. So to be able to have the opportunity to keep scoring goals in there and keep building on what we have going on here, it’s a dream come true for me. I’m just hungry, man. I can’t wait to get on the field and score goals and win games and get back to where we were.”