For the first time since December, the weekend will have a mix of both Americans abroad and Americans domestic as the MLS season opens with a full slate of games. So there is a wide range of games for fans to follow as March opens.

Here are the top 10 games to follow this weekend from an American perspective:

It could be the battle of two key U.S. national team players when surging John Brooks and Wolfsburg host Josh Sargent and Werder Bremen on Sunday.

U.S. national team coach Gregg Berhalter was on hand last week to watch Wolfsburg defeat Borussia Moenchengladbach. Brooks did not disappoint Berhalter as he turned in a first-rate performance and Wolfsburg won for the third time in four games to move clearly into fifth place. Just last year, the club narrowly avoided relegation and now it finds itself in the European positions.

Sargent, 18, is coming off his first Bundesliga start in a 1-1 draw against Stuttgart. The St. Louis native was quiet in his 60 minutes of action but he playing time remains consistent for Werder Bremen since December.

This midweek, Sargent signed a new contract the club which should boost his confidence for the season’s final months. Werder Bremen currently sits comfortably in midtable at ninth place, which bodes well for Sargent to get more minutes to prepare for next season. 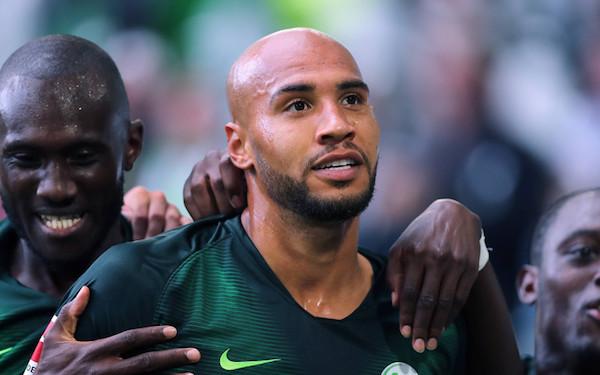 One of the best games in the opening weekend of MLS takes place Sunday night when D.C. United hosts Atlanta United. To make it more intriguing, U.S. national team general manager Earnie Stewart will be on hand in the nation’s capital to monitor several players.

D.C. United is an emerging contender in the league. Last season, it came to life in the second half of the season when it added Wayne Rooney to a stellar attack alongside Luciano Acosta and was boosted with the return of Russell Canouse in defensive midfield. Since then, the club has only improved with the addition of right back Leonardo Jara from Boca Juniors and striker Lucas Rodriguez from Estudiantes.

But D.C. United will have quite the test in Atlanta United. The defending champions have a new look in 2019 but flexed its muscle on Thursday in the Concacaf Champions League. New coach Frank de Boer has a lot of firepower at his disposal with Josef Martinez and Pity Martinez -- the league’s most expensive important from River Plate.

Who will Stewart be on-hand to watch? Most likely D.C. United winger Paul Arriola, who impressed for the national team in two recent friendlies. He could also be monitoring Atlanta United goalkeeper Brad Guzan and midfielder Darlington Nagbe along with D.C. United’s Canouse.

Newcastle United has all the momentum at its back, winning two games in a row and moving away from the relegation zone at a rapid pace to 13th place in the Premier League.

Above it all, it is playing attractive soccer and perhaps the biggest reason for the club’s reversal of fortune has been the play of Paraguayan international Miguel Almiron, who moved to Newcastle on high-profile transfer from Atlanta United. Everyone has played better with Almiron on the field, including U.S. international right back DeAndre Yedlin, who has also raised his game the past two weeks.

But playing away at 10th-place West Ham United in London will be the biggest test for Newcastle since Almiron’s arrival. If it can notch another win, the excitement for the club will continue.

Derby County has hit a rough patch in its season with two consecutive losses and Frank Lampard’s club will need to get back in the winning column soon if it wants to keep its promotional chances alive. Once in the promotional playoff positions, it has tumbled to seventh place and is out of the top six by two points.

American attacking midfielder Duane Holmes has been one of Derby’s best players since the turn of the new year and he will have to continue his high level of play if Derby wants to remain a threat to move up.

The Georgia-born Holmes has never played for the United States at any level but has been emphatic that he desperately wants the call up to the Stars and Stripes. Aston Villa will be a tough test but it is a game where Derby has the talent to emerge victorious if it plays well.

Last weekend, Reading blew a big chance to move three points clear of the relegation zone when it conceded a second-half equalizer against Rotherham and the two teams straddling the relegation zone played to a 1-1 draw. New Jersey’s Matt Miazga has been a huge boost to the team’s backline in its relegation fight but its offense has continued to sputter.

If Miazga and Reading are going to avoid relegation, Saturday’s game away at last place Ipswich Town is critical. It is a very beatable opponent and if Reading fails to win this game, there is a good chance the team gets overtaken sooner or later.

In MLS’s second game on Sunday, Bob Bradley’s Los Angeles FC will host Sporting Kanas City in a matchup of two teams who are expected to be among the best in the Western Conference in 2019. LAFC made it to the playoffs in just its first year in 2018 while Sporting advanced to the Wester Conference finals before being ousted by Portland.

Expectations will be higher this year as LAFC kept is core intact -- which includes U.S. national team central defender Walker Zimmerman and Mexican international Carlos Vela along with Diego Rossi and Andre Horta.

Sporting Kansas City, meanwhile, has two competitions to juggle after wins over Toluca in the Concacaf Champions League, where it defeated the Liga MX team while playing attractive and impressive soccer in the process. 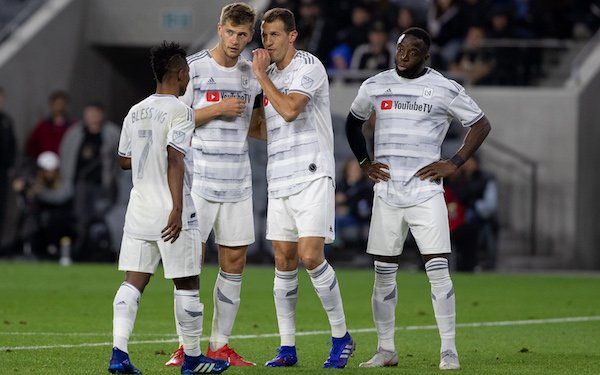 League One games are often off the radar for most American fans as it is the third tier in England. But American teenager Charlie Kelman, 17, is one to keep an eye on as he has scored goals at a remarkable pace at the club’s youth level and has played well since his promotion to the first team. In January, he scored the League One goal of the month with a stunning 60-yard bomb over Plymouth Argyle’s goalkeeper.

But there is a chance that Kelman could start or see more minutes off the bench due to the injury suffered last weekend by Southend’s starting striker, Stephen Humphrys. On Saturday, the club hosts second place Barnsley on national television in England and it could be quite the platform for Kelman, who is eligible for the United States, England and Scotland but who stated this week he is pushing to make the U.S. U-20 World Cup team this summer.

Last weekend, Erik Palmer-Brown had his best performance of the season when he was instrumental for NAC Breda in earning a point in a scoreless draw against Groningen. For his efforts, he was named by every Dutch publication to the Eredivisie Team of the Week.

NAC Breda is still in last place in the Eredivisie, but Palmer-Brown has broken back into the team’s starting lineup and is looking well from an individual perspective. While he has not generated the headlines of other young American players who have made the move to Europe in recent years, Palmer-Brown still remains very talented and his progress is important for the U.S. programs. He seems like a strong candidate to start for and perhaps captain the U.S. U-23 team over the next year.

The Scottish Cup resumes this weekend with the quarterfinals, and it is an opportunity for young U.S. forward/winger Tim Weah to endear himself to Celtic -- which recently underwent a managerial change as Brendan Rogers left to take the Leicester City job and was replaced by Neil Lennon.

Weah has had some impressive moments early in his loan to Celtic from Paris St. Germain but has seen his playing time dwindle in recent games to being a late cameo. But if Weah can perform well in the Cup against Hibs, he can rebuild his case for more minutes.

One interesting note about Hibernian: former U.S. international fullback Jonathan Spector (currently out of contract) is beginning a trial at the Edinburgh club and could join it down the stretch of the season where it sits in sixth place in the Scottish Premier League.

Two of the original teams of MLS will meet on Saturday when the Columbus Crew hosts the New York Red Bulls on Saturday afternoon. It will be a new era for Columbus which avoided a relocation after a public campaign and has found a new ownership group. New coach Caleb Porter will also take over for Gregg Berhalter, who left to take the U.S. national team job.

Columbus has a pretty strong team on paper but it will be interesting to see how it adapts to a new style after Berhalter had an established and detailed-oriented system. American fans will want to keep an eye on U.S. national team goalkeeper Zack Steffen, who signed for Manchester City in December but will remain in Columbus on loan through July. Also likely to take part of fellow U.S. national team players Wil Trapp and Gyasi Zardes.

The Red Bulls won the Supporters Shield in 2018 and advanced to the Eastern Conference final before losing to Atlanta. The club seems to have adjusted to new manger Chris Armas’ approach well and Armas seems determined to mostly build off of the system built by his predecessor, Jesse Marsch.

On Wednesday, the Red Bulls advanced to the quarterfinals of the CONCACAF Champions League with a convincing 5-0 aggregate win over Club Atletico Pantoja. Despite the loss of Tyler Adams in the offseason, the Red Bulls should be among the best teams in the league by virtue of keeping its defense together. The backline is anchored by U.S. internationals Aaron Long and Tim Parker in central defense.

But the team continues to have mainstays such as Daniel Royer and Bradley Wright-Phillips in the attack along with American homegrowns Alex Muyl and Sean Davis in the midfield. The Red Bulls have a system that works, is fun to watch, and continues to develop very solid American talent. 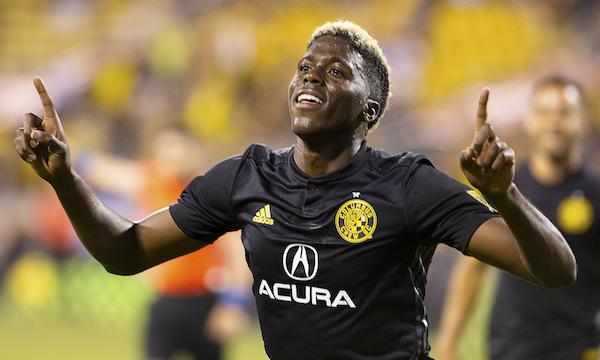