Comeback kid: Two goals are icing on the cake for Jordan Morris 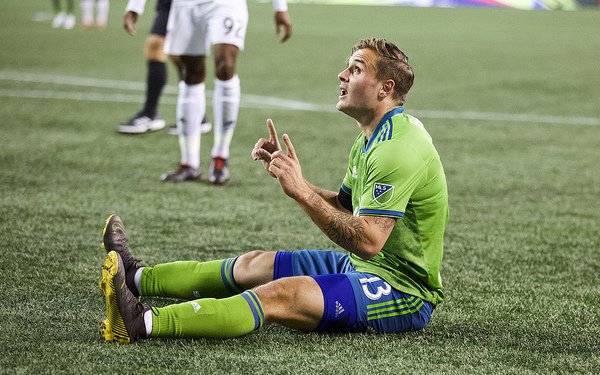 A year and four days after Jordan Morris' 2018 MLS season ended before it began, he got the 2019 season off to a bang.

Morris scored two goals in the first half to beat the Seattle Sounders to a 4-1 comeback win over FC Cincinnati, which was playing its first MLS game.

A knee injury suffered against Salvadoran club Santa Tecla in the first round of the Concacaf Champions League kept Morris out the entire 2018 MLS season. When you add in a hamstring injury that kept him much of the last three months of the 2017 season, Morris hadn't started an MLS game in 17 months.

He made up for lost time, scoring in the 33rd and 43rd minutes to break Saturday's game open.

He was lucky on the first goal when his angled shot deflected off FC Cincinnati defender Nick Hagglund and past goalkeeper Przemyslaw Tyton. But the second goal was a golazo -- Morris fired a left-footed shot into the far corner after being fed by Spaniard Victor Rodriguez.

“This game is something I’ve been waiting for so long,” Morris said. “I didn’t have any expectation of going out and scoring a goal and stuff like that, I just wanted to be out with my teammates and help them, so it was icing on the cake to get a couple goals."

His teammates piled on him after the first goal set up by captain Nicolas Lodeiro.

“It was amazing,’’ Morris said. “It was an emotional moment. With what my teammates helped me get through last year, because there were some tough times, when I came in this year they understood that maybe it would take a little time for me to get back to form.’’

Morris returned to a team that has seen changes since he last played. Clint Dempsey retired and Osvaldo Alonso, the Sounders' long-time captain, became a free agent and moved to Minnesota United. Seattle added Peruvian World Cup striker Raul Ruidiaz, who is now the starting center forward, pushing Morris back on the wing.

But Morris was active for his entire 77-minute outing as the Sounders overran the hapless FC Cincinnati defense time and again. It was the kind of performance that will get the attention of U.S. national team coach Gregg Berhalter, who had Morris into the January camp briefly to meet the new group.

“The one thing that I was most pleased about is, in his own words, he wanted to be goal-dangerous,” Sounders coach Brian Schmetzer said.