In praise of blow-for-blow drama over tactical stalemates

It seems like a simple question. Would you rather watch a 0-0 draw or a game that ends 3-2? The answer is not always straightforward. "It depends on whether you're asking me as a fan or as a coach," my co-coach answered. "As a coach, I love 0-0 draws."

We'd been texting during last Wednesday's Chelsea-Tottenham Hotspur game. I knew that it would be just the sort of game he devoured, comparing the tactical philosophies of Maurizio Sarri and Mauricio Pochettino. The game was typically tight, fast and physical. Kieran Trippier's own goal to confirm Chelsea's 2-0 win was just the sort of one-off defensive aberration that can prove decisive at the highest level.

I missed Trippier's goal. I'd fallen asleep. I explained to my colleague why: "These games all look the same to me. Manchester United vs. Liverpool in the Premier League. Liverpool vs. Bayern Munich in the Champions League. Manchester City vs. Chelsea in the League Cup final. All nil-nil-nil-nil. The teams and the players are all interchangeable. Of course they are highly gifted and at the top of their game, but they've become automatons in a coach-dictated archetype that no longer permits enough deviation, self-expression or character."

My co-coach fought back: "Exactly! Every player knows his role. These clubs have whole teams of tactical analysts who scrutinize games and produce data that allows coaches to pinpoint every strength and weakness of a player - both their own and their opponents."

I appreciate why that fascinates a young student of the game. Whereas to me they might as well play these games on a computer. The clubs are increasingly losing a sense of identification with their local communities as they brand themselves to a worldwide audience through global tours and the Fiscal Champions League (there is no longer a single champion - everyone above a certain income is just one of several champions). Too many soccer clubs have become like generic corporations. Anyone can buy in based on the superficial premise of favorite color combination and most photogenic product (formerly known as 'a player').

On Saturday I went to watch Eintracht Frankfurt play TSG Hoffenheim, with both teams just off the Champions League places in the German Bundesliga. Now, I'm not kidding myself - both of these teams feature multi-national lineups, with very few players from either their local area or their own youth setups. Frankfurt comes to the USA every summer in search of exciting new markets, while Hoffenheim's risen from the sticks on the back of its owner's huge wealth. If Frankfurt takes that next step up to becoming Champions League regulars, then the struggle will begin not only to retain that status, but also its identity as a hugely popular club anchored in the heart of its city and region. 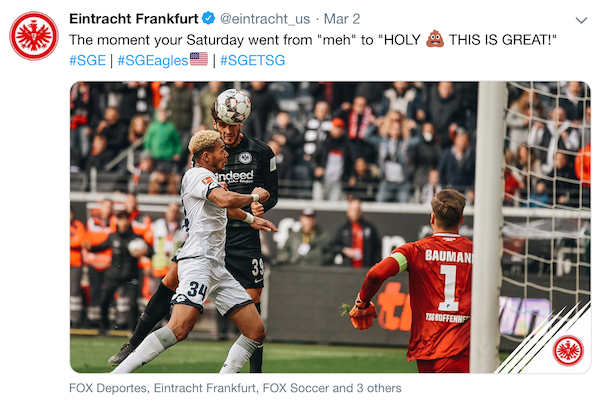 If both teams played in the Champions League the way that they played on Saturday, they'd be hammered. Right from the start it was like the final minutes of a close basketball game. It was as though the players had been told to win or die. Play flowed from end to end, and there were chances, goals and drama on draft. Hoffenheim turned the game to lead 2-1 after an hour, then had their central defender Kasim Adams red-carded. Driven on by a crowd of almost 50,000, Frankfurt equalized in the 89th minute, then scored the winner at the end of stoppage time. There were showers of beer and dancing with strangers.

"You would have hated it," I told my co-coach. "There were so many errors. It was a free-for-all. There wasn't a whole lot of effective pressing. It's one of the greatest games I've seen in almost 50 years of watching live soccer." I was still coming down from the euphoria. He responded with a knowing smile. We were on the touchline in a frigid wind on a grey Sunday morning, scouting next week's opponent.

"See how the No. 4 always pushes up and leaves a gap at the back," he said, not entirely changing the subject. "Every time. We can take advantage of that." Truth be told I hadn't noticed, but I'm glad to have someone there who does.

Last week our U-16 lads lost 5-3 in an open, see-saw game that saw us concede two very late goals while pushing for a winner. I was happy with the way they played and thought it was a cracking game of soccer. Defeats upset my co-coach for days, while I argue that losing is the best way to learn. My Yin to his Yang makes for an always interesting and mostly productive dialogue.

Every game, at every level, throws up its own controversies, emotions and talking points - whether it ended 0-0 or 3-2. Each weekend throws up thousands of discussions that make you want to come back and try again. Is counter-pressing a passing trend? Might a severe economic downturn or the ongoing environmental crisis make sport more local again? Should teams who play in goalless draws be forced into sudden-death overtime? Hopefully, maybe and no, but on all three questions I reserve the right to have changed my mind by this time tomorrow.