After 2-2 ties against both Japan and England, the USA finished second to England in the SheBelieves Cup thanks to Tuesday's 1-0 win over Brazil, which had opened with loses to England (2-1) and Japan (3-1). A swift counterattack led to Tobin Heath's 20th-minute goal, a well-struck shot from 17 yards into the upper corner. Otherwise, it was not an impressive evening for the U.S. offense. 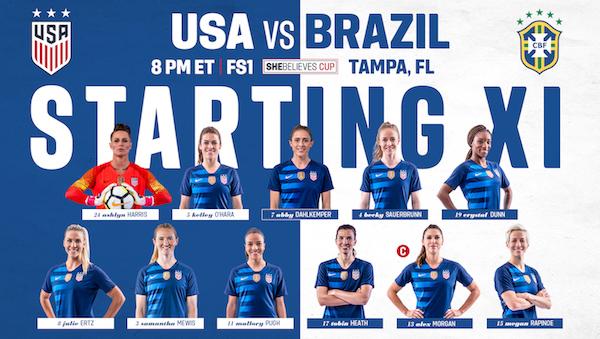 USA Player Ratings
(1=low; 5=middle; 10=high.)
GOALKEEPER
With Alyssa Naeher sidelined with a shoulder injury and after Adrianna Franch had a poor outing in Saturday's 2-2 tie with England, Ashlyn Harris got her first start of 2019. Harris made a diving save on a close-range header by Ludmila in 75th minute and alertly came out to smother a through ball in the 88th minute.

DEFENDERS
One of the Brazilian crosses cleared by an Abby Dahlkemper header went straight to Mallory Pugh to spark the counterattack that led to the game's only goal. Dahlkemper and her central defense partner Becky Sauerbrunn had little trouble stifling the Brazilian frontline, which got little support from its defense-minded midfield. Crystal Dunn, who won her battles with Marta, hit a great cross-field pass to Heath in the second half and also attacked down the wings, as did Kelley O’Hara. But neither of their efforts caused many problems for the Brazilians. O'Hara's 34th-minute diving header, unfortunately, went straight to the keeper, or it would have become a viral video clip.

MIDFIELDERS
Mallory Pugh, who should have been awarded a penalty kick seconds after kickoff when bowled over by Thaisa, relayed the ball to Tobin Heath on the sequence that led to the gamewinner. Pugh, who later hit a perfect cross for Kelley O'Hara's diving header that keeper Aline caught, was subbed at halftime. Central midfielder Julie Ertz toiled defensively but also gave up the ball with poor touches. It remains an issue that the USA's central midfielder is saddled with so much defensive work, U.S. attacks are predictably down the flanks. Sam Mewis, on the left side of midfield, covered a lot of ground and made some key defensive contributions late in the game when the Brazilians put more effort into attacking. 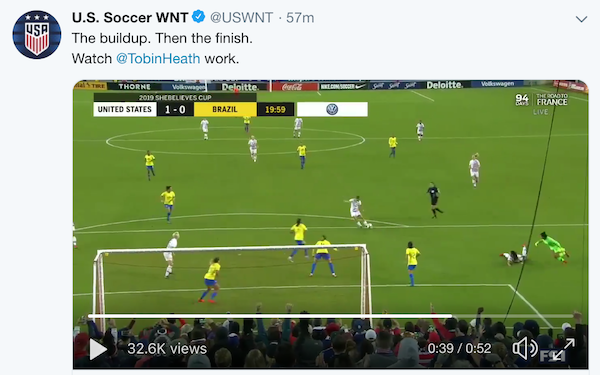 FORWARDS
Megan Rapinoe struck two free kicks straight into the Brazilian wall. Aside from her strike into the net that was nullified because she was a step offside, it was an underwhelming performance by the left winger, who hit a poor cross in the 40th minute after one of the few impressive multi-pass U.S. buildups. Alex Morgan took the shot that rebounded off keeper Aline to Tobin Heath on the goal. Otherwise, Morgan saw little of the ball. Heath had superbly dribbled down field and fed Morgan before finishing the rebound. In the 16th minute, Heath shot straight at Aline when she had plenty of time to make more of the opportunity.

SUBSTITUTES
Christen Press, who replaced Pugh at halftime, quickly became the USA's most active player. She won balls in the Brazilian half and attacked swiftly, but like her over-hit cross in the 56th minute, was unable to make a profound impact on the incohesive U.S. offense. Emily Sonnett blocked a cross shortly after replacing O'Hara in the 66th minute. The last three subs came late in the game.