Ajax is back, Real Madrid is humiliated on momentous evening 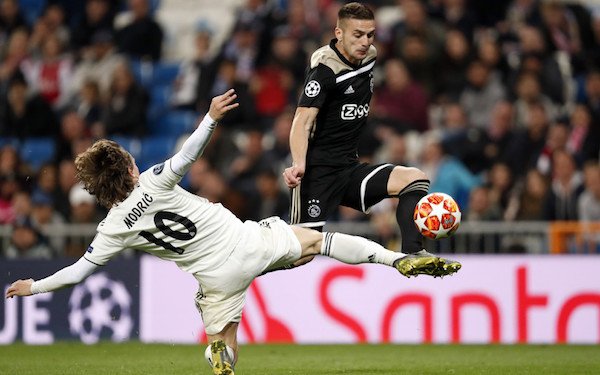 What can you say after one of the most momentous evenings in recent European history?

Ajax, a club with almost a tenth of the budget of its opponent, eliminated Real Madrid, winner of the last three UEFA Champions League.

It did so after coming back from 2-1 down after the first leg to win 4-1 in Madrid and advance to the quarterfinals.

Ajax is one of the great names in the history of European soccer, winner of three straight European Cups in the early 1970s with the great Johan Cruyff and the Champions League in 1995, but it had not won a knockout series in 22 years.

Credit for Ajax's rebirth goes to its famed youth system that has struggled to keep its stars long enough to make a run in Europe.

It has two special youngsters in 21-year-old midfielder Frenkie de Jong, whose move leaving the great Luka Modric on the seat of his pants was an instant hit on social media, and its 19-year-old captain, defender Matthijs de Ligt. Ajax has already agreed to transfer de Jong to Barcelona next season, and de Ligt has said he wants to join his countryman at the Camp Nou.


Some of the Ajax skills tonight pic.twitter.com/avXGVl3oZD

But the great Ajax teams have almost always included a mix of Dutch and foreign talent, most often with players from Denmark and Africa. And this team is no different, a multi-national team with starters from Argentina, Brazil, Cameroon, Denmark and Serbia, plus two Dutch-bred Moroccan internationals.

The star of evening in Madrid was 30-year-old Serbian Dusan Tadic, who had the game of his life, assisting of the first two Ajax goals by Hakim Ziyech and David Neres and scoring the third himself. The fourth goal was a free kick by Dane Lasse Schone that beat giant Thibaut Courtois to the far post.

Real Madrid was playing without captain Sergio Ramos, who was suspended after intentionally getting a yellow card in the first leg. The only way to describe what Ramos did as bad karma.

Everything that could go wrong for Real Madrid did in the first half. Defender Raphael Varane's header rattled the crossbar moments before Ziyech put Ajax ahead, and Spaniard Lucas Vazquez and Brazilian teenager Vinicius Junior had to leave the game with injuries.

Not to say the outcome wasn't predictable. These figures underscore the extent of Real Madrid's problems at home ...

“I think I have never felt this awful," said Real defender Dani Carvajal said. "I do not know how to explain it. This week everything has gone against us. Tonight we cannot look for excuses. We have to show our faces and not hide, our season has been a piece of s***.”