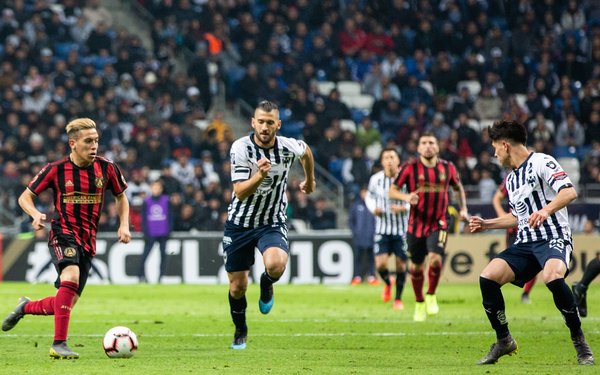 Two more games in the Concacaf Champions League brought two more losses for MLS teams, neither unexpected since they were on the road, but the first leg of the quarterfinals ends with four losses in four games -- MLS's worst week ever in the CCL's knockout stage -- and only one MLS team with a realistic chance of making up the difference in next week's second leg.

Wednesday's first game saw tiny Panamanian team CAI again beat an MLS team in La Chorrera, but instead of 4-0 against the best Toronto FC had to offer it was 2-1 against Sporting KC, which was resting eight starters.

In the nightcap, Liga MX heavyweight Monterrey wore out MLS champion Atlanta United, extending a 1-0 lead on a rather fortunate penalty in the 17th minute into a 3-0 win with two goals in the last 10 minutes.

On Tuesday, the New York Red Bulls and Houston Dynamo both lost at home, 2-0, to Santos and Tigres, respectively.

CAI-Sporting KC. Spaniard Ilie, one of only three starters from Sporting KC's first three competitive matches to remain in the lineup, scored on penalty kick in the 51st minute to temporarily even the match against CAI and give Sporting KC a crucial away goal that could come in useful when the series resumes with the second leg next Thursday at Children's Mercy Park.

The game was the third in seven days on the road for Sporting KC, which played at Mexico's Toluca in altitude last Thursday and LAFC in the MLS opener last Sunday and it showed. Midfielders Ilie and Roger Espinoza, who both were playing their third game, struggled. Having logged nearly 6,000 travel miles over the last week, Sporting KC will be at home on Sunday for its MLS home opener against Philadelphia.

“It was good to get the away goal and keep the scoreline the way we did," said Sporting KC manager Peter Vermes, "so now we have to obviously do the business at home and that’s Champions League. That’s just the way it is. Based on the fact that I don’t that we played all that well, it leaves us in a better position than not having scored here.”

Monterrey-Atlanta United. Nicolas Sanchez gave Monterrey the lead from the penalty spot in the 17th minute after Colombian Dorlan Pabon was ruled to be taken down by Leandro Gonzalez Pirez.

Pabon added to the lead in the 80th minute when he eluded midfielders Eric Remedi and Darlington Nagbe and fired off a left-footed shot from the top of the box. Pabon was again involved in the third goal, finding Jesus Gallardo open at the top of the six-yard box, where the Mexican international settled the ball off his chest and blasted a left-footed shot into the roof of the net.

Los Rayados effectively shut down the Atlanta attack, taking down star Pity Martinez time and again with tactical fouls. Ten of the 26 fouls Monterrey committed were on the Argentine. Of the five yellow cards handed out, three were to Atlanta United players, including Gonzalez Pirez, who will miss the second leg. Monterrey's young Mexican star, Carlos Rodriguez, committed 10 fouls but was not carded.

A 1-0 loss would have given Atlanta United a reasonable shot in next Wednesday's return match at Mercedes-Benz Stadium, but the 3-0 deficit will be all but impossible to overcome against an experienced Monterrey team that has given up only 28 goals in 30 Liga MX games in 2018-19.