The disappointment -- flop, really -- of the first 2019 MLS weekend was obviously the trite showing of Atlanta against D.C. United. Too early to make judgments? OK, I’ll hold off - anyway, that’s a good idea because there was a sunny side to that game - the way that D.C. United played. 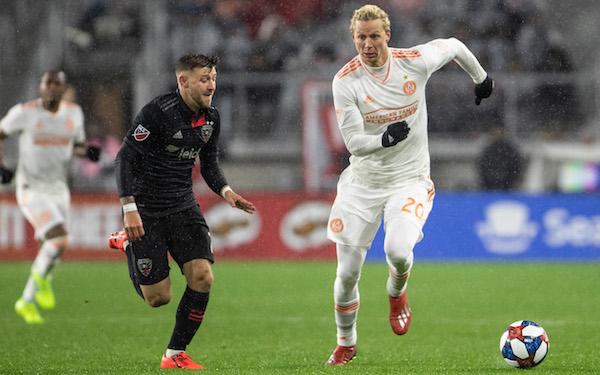 Not entirely to my liking, but enough good stuff for one to see plenty to build on. And D.C. United’s victory was achieved while Wayne Rooney was having a rather ordinary game. So D.C. United can play good soccer even without Rooney -- in this game, the good soccer came up front, thanks to Paul Arriola and Luciano Acosta.

Arriola is already part of Gregg Berhalter’s national team program, so we’re spared all the hue and cry that always seems to arise whenever an American player has a good game in MLS -- repeated reminders that the USMNT seems to be, has been for decades, the work-in-progress to end all WIPs. On that theme, MLS did get to showcase a candidate for instant elevation to the national team: the Galaxy’s youngster, Efrain Alvarez. His 30-minute contribution to the Galaxy game was a remarkable display of subtle soccer skills that had a great deal to do with the Galaxy beating Chicago.

The emphasis there is on the word subtle. Not a word that you normally link to the USMNT, but one that really ought to excite Berhalter. Did it? “When he’s doing what we expect him to do, there will be an opportunity for him with the U.S. national team.” Now, don’t you get carried away, will you Gregg?

As for the Galaxy opponent, Chicago -- I mean, is it possible that this team will some day play soccer that’s worth watching? GM Nelson Rodriguez surely knows attractive soccer when he sees it, but Coach Veljko Paunovic may not. I recall watching his Serbian boys win the 2015 U-20 World Cup. I’ve followed that tournament pretty closely for decades now, and Paunovic’s team was undoubtedly the dullest winner I can recall.

Actually, the Fire’s scruffy play may have more to do with Dax McCarty -- a player we saw a lot of during his Red Bull days. A player who never made anything look easy, who made a habit of only just arriving in time, or only just controlling a pass. All of this accomplished inelegantly but with persistently abundant energy. I don’t think teams that rely on players like Dax ever win anything.

What to make of Kansas City? The word seems to be that they must be considered a serious candidate for winning something -- maybe MLS, maybe the CCL. After watching their antics in the game against LAFC I’m hoping they don’t win anything.

What stood out was merely the overt physicality of their game - 17 fouls, 5 yellow cards and one red needs a lot of explaining. And any explanation will have to include the possibility that this was systematic. And therefore unacceptable. Bob Bradley’s LAFC team looked as sprightly as they did last year. Which is doubly encouraging: they are fun to watch, and it gives me extra enjoyment to realize that this is Bob Bradley - the formerly over-, extra-, super- and hyper-serious Bradley -- wearing a smile as he presides over this ebullient version of soccer. And yes, how exactly right that LAFC should get a late, late goal to settle KC’s lamentable bullying.

The New York teams (one of them from New Jersey) did not distinguish themselves. The Red Bulls have long -- almost eternally -- lacked sparkle. The lack continues. One had hoped for a glimpse of their new youngish Danish striker, Mathias Jorgensen, but he was nowhere to be seen, neither on the field nor on the bench. We got two neatly headed first-half goals, one from the Bulls’ sparkle-free Andreas Ivan, then the reply from Gaston Sauro (which, surprise, surprise, TV commentator Shep Messing explained should never have happened). Then a rather uneventful second half. Ho hum.

How about New York FC -- how did Alexandru Mitrita (their David Villa replacement) fare? Well, OK. An assist and five shots on goal, but no suggestion of the excitement that Villa brought to the field, that leaping feeling, every time he got the ball, that something brilliant was about to happen. I guess NYCFC has work to do. When you’re leading 2-0 at the half and the final scoreline reads 2-2, something needs attention. Maybe it is that old standby ... urgency. Like the Red Bulls, NYFC looked sub-par.

If the heat of genuine excitement was missing among the New York teams, there was something different in Seattle. Not heat, but warmth, coming from feel-good moments. Two of Seattle’s goals came from Jordan Morris - the promising youngster who had been forced to sit out the entire 2018 season with a torn ACL. Some comeback, eh?

There was an earlier feel-good moment when Cincinnati opened the scoring with its first ever MLS goal -- from Leonardo Bertone -- dispelling one’s fears that Cincinnati might be blown away, not good enough, too naive and so on. They showed enough, even though they did eventually give up four goals. But Bertone’s goal was a beauty, a sudden volley from the edge of the area, struck with great power and accuracy, one of those violent shots that leave you blinking and momentarily unsure you saw what you think you saw. I rate it the Goal of the Opening Week (though I didn’t see all of them). 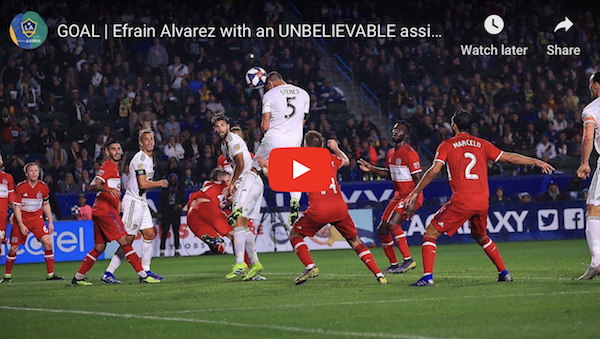 I’ve complained quite a few times in the past that, given the pack of awards the sport now hands out, it is absurd not to include a “Best Assist” prize. Worse than absurd, it is a slur on the goal-providers who contribute greatly to the sport’s excitement and enchantment.

The “assist” concept is entirely American, and it has, slowly, won over the rest of the soccer world - except, possibly, England, where they simply gag on the notion that Americans can make a worthy contribution to the sport. Given that the assist is an American idea, who better to inaugurate the assist award than MLS? Not for the first time, I suggest they get on with it.

All worthy causes, no doubt ... but at the moment, the only recognition the playmakers get is a stat, a bare, boring number. Can there be anything bad about an award that honors gifted players and ensures the soccer world gets repeated views of some of the sport’s most skillful, most magical moments?

So, my own winner of this week’s (currently unsponsored) Assist Award, is Efrain Alvarez of the Los Angeles Galaxy, for a bewitching moment of left-footed skill that allowed Daniel Steres to score the Galaxy’s tying goal. And how fitting that a 16-year-old should set the tone and -- hopefully -- stir the the MLS stick-in-the-muds into action.

mls
3 comments about "The opening week -- and yet another appeal to MLS for a Best Assist award".
Read more comments >
Next story loading