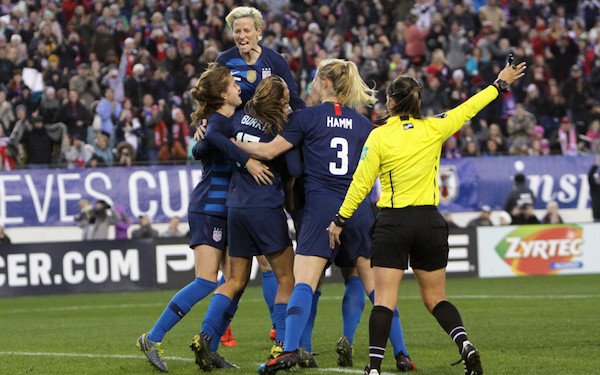 U.S. women's national team players and U.S. Soccer are back in court, though this time it's the entire national team -- 28 players -- suing the federation, and they have moved from the EEOC, where they began in 2016, to U.S. district court in Los Angeles.

The case. The players are suing the federation for:

-- Violation of the Equal Pay Act;
-- Title VII of the Civil Rights Act:

The players charge U.S. Soccer has engaged in gender discrimination by:

-- Paying them less than members of the men's national team for substantially equal work;
-- Denying them at least equal playing, training, and travel conditions; equal promotion of their games; equal support and development for their games; and other terms and conditions of employment equal to what the men receive.

-- An injunction to an end to the discriminatory practices;
-- An award of liquidated and punitive damages; and
-- Adjustment of their pay and benefits to a level that would not be discriminatory.

The trigger. In 2016, five women's national team players -- Hope Solo, Alex Morgan, Carli Lloyd, Becky Sauerbrunn and Megan Rapinoe -- filed a pay-discrimination complaint with the EEOC. The issuance of a right-to-sue letter last month allowed the players to move into federal court. If the EEOC investigating agent found no evidence of unlawful discrimination, the EEOC would have issued a letter of dismissal.

The rationale. Rapinoe, one of the USA's captains at the SheBelieves Cup that ended on Tuesday, told the Associated Press that the expanded suit underscores the team's unity and support for each other.

"It puts a face and a name to each one of these claims of discrimination," she said. "But it also shows incredible unity and togetherness from our team that is really important in this time. Just that idea of women supporting women and backing each other, creating something together that is much larger and more impactful than they could on their own."

Since the EEOC was filed, the U.S. Women's National Team Players Association engaged in protracted negotiations with the federation to reach a new collective bargaining agreement. That agreement was reached in 2017, but not before the union changed executive directors. The parties to a  collective bargaining agreement can't bargain away their rights, so the CBA, which goes through 2021, shouldn't hinder the ability of the players to sue the federation for its discrimination practices.

"At the heart of this whole issue we believe that it's the right thing," said Rapinoe. "We believe that there has been discrimination against us. And while we have fought very hard and for a long time, whether that be through our CBA or through our players association, putting ourselves in the best possible position that we can to get the best deal that we can, we still feel that we don't have what we're trying to achieve, which is equality in the workplace."

-- The federation has separate collective bargaining agreements with its men's and women's national team players associations. (And different time frames to the agreements, which exacerbated some of the terms of the working conditions.)
-- The women have standard employment agreements with the federation, which subsidizes a maximum of 24 U.S. players for playing in the NWSL, on top of their pay for playing international matches while the men are only paid for playing international matches.
-- The number of games the federation organizes and controls the revenue streams for varies in a four-year cycle. (U.S. Soccer hosts eight World Cup qualifiers in a typical men's cycle; Concacaf organizes Women's World Cup qualifying.)
-- The number of games the women and men play each year varies on where the teams are in their cycles and what competitions are offered. (Despite the variables, the players in their complaint state the federation rejected a risk-and-reward model of compensation.)
-- Women's World Cup participation payments to federations are only a fraction of what they are for the Men's World Cup. (In their suit, the players state they received only $1,725,000 from U.S. Soccer for winning the 2015 Women's World Cup while the men shared  $5,375,000 for losing in the round of 16 a year earlier).
-- Commercial rights (television and sponsorship) are bundled in the deal U.S. Soccer has with Soccer United Marketing.

The timing. The suit, filed on International Women's Day, comes three months before the Women's World Cup begins in France, where the USA will be defending champion, and nine months after the World Cup in Russia, which took place without the USA.

What they said. In their complaint, the players use the words of former SUM president Kathy Carter against the federation, stating that she acknowledged during her run for U.S. Soccer president (and on leave from SUM) that the women's national team has been under-marketed and the federation has “taken the WNT for granted” and agreed that there was a need for the USSF to invest equally in both programs.

The same goes for the campaign words of current U.S. Soccer president Carlos Cordeiro, who was vice president when he defeated Carter in 2018: “Our women’s teams should be respected and valued as much as our men’s teams, but our female players have not been treated equally.”