Jack Daley, architect of the original Seattle Sounders, dies at age of 82

Jack Daley, the architect of the original Seattle Sounders, one of the great success stories of the old North American Soccer League's early days, died on Thursday of an apparent heart attack at his home in San Diego.

Daley's son, John, told the Seattle Times that the apparent cause of death was a heart attack at his home in San Diego.

Daley, who was 82, worked in the NASL for the Toronto Metros, Sounders and San Diego Sockers.

He was the general manager for the Toronto Metros in 1973 when Seattle Pacific coach Cliff McCrath, who consulting for a group interested in bringing a pro soccer team to Seattle, met Daley at a playoff game in Philadelphia, where the Metros were playing the Atoms, coached by Al Miller, a longtime friend of McCrath's.

McCrath recommended Daley to Walter Daggatt, who put together a Seattle group together and tried to get an NFL team but was persuaded by Lamar Hunt, owner the NFL Kansas City Chiefs and NASL Dallas Tornado, to buy a soccer team, which Daggatt's group did for a $25,000 expansion fee.

The Sounders became an instant success, hosting the first sellout in American pro history when 13,876 fans turned out at Seattle's Memorial Stadium in June 1974. The core of the team Daley assembled was a group of British veterans, many of whom settled in Seattle and were responsible for popularizing soccer and keeping interest alive in the years between when the Sounders folded after the 1983 NASL season and they joined MLS in 1999. 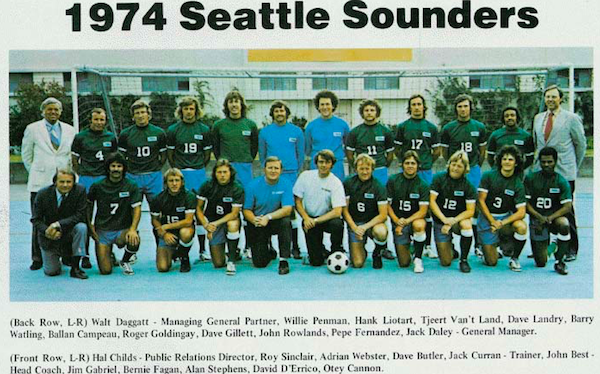 Daley later moved to the San Diego Sockers, who were just starting to become an indoor force, winning indoors titles in the NASL in 1982 and 1984 and MISL in 1983 before joining the MISL on a permanent basis after the NASL's demise in 1984. The indoor MISL was supposed to be the future of pro soccer in the United States, but Daley, the Sockers president, was fired in a cost-cutting measure in the middle of the 1984-95 season.

After retiring, Daley worked as an elevator operator at Petco Park, the home of the baseball San Diego Padres, so he could stay close to sports.

Daley is survived by his wife, Chris, and sons Andy, Michael and Brendan as well as Jon.