Have we been too harsh on direct soccer?

My U-14 team’s first practices were heavy on small-sided games and passing exercises. In the opening game of the season, they were dutifully working the ball around, with the most talented players winning the occasional 1v1 battle.

We lost 5-1. The other team simply blasted the ball up the field to forwards who were faster than our defenders. On one goal, an assistant coach exulted in the fact that their goalkeeper got an assist.

Our team stuck with it the rest of the season, but we also worked on longer passes. We still weren’t blasting the ball up the field (our forwards didn’t have the speed to play that way, anyway), but our best goal was on a 40-yard diagonal ball from a center back to a tactically astute winger who was making a well-timed run. We got a few results, but the teams that could pull off direct attacks still had our number.

Route 1, longball, kickball -- whatever you call it, direct soccer has a bad reputation. Perhaps that’s justified, or perhaps it’s a way of feeling better about losing that U-14 game. Or a college game. Or a World Cup game.

Yes, a World Cup game. If I were to complain about my rec-league woes, I’d have plenty of company. Mexico’s then-coach Juan Carlos Osorio was offended by Sweden’s long-ball tactics when they faced off in the World Cup last year. Sweden won 3-0.

And Sweden wasn’t alone. France possessed the ball just 48% of the time in the 2018 World Cup, according to the FIFA Technical Report, which said of the champions: “France did not rely on ball possession, but rather focused on getting into the opposition’s half as fast as they could.”

Meanwhile, Germany possessed the ball 67% of the time and failed to make the Round of 16. Spain, predictably, had the ball 69% of the time but, unpredictably, fell to host nation Russia in the Round of 16. Russia went on to the quarterfinals and scored two against Croatia (two more than possession wizards Argentina) before losing on penalties, all with a mere 38% possession for the tournament.

All of this is bad news for all the youth coaches who insist that they’ll never resort to Route 1 soccer. They keep telling us their possession style will win out in the long run over all that other team that plays “kickball.” 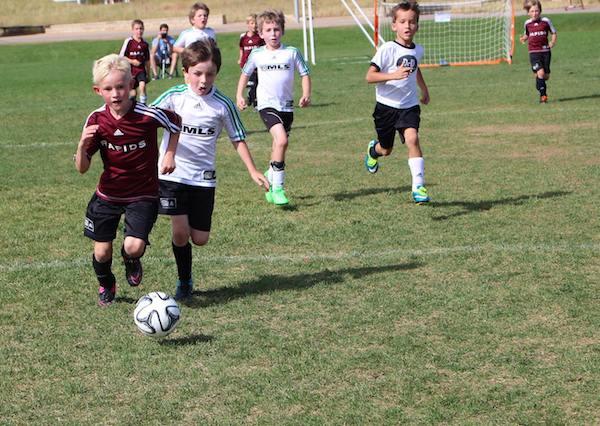 The funny thing is that no self-respecting club will admit to having that “other” team. In several years of research that includes perusing scores of youth club websites, I have yet to find that “other” team. No one says, “We’re going to play Route 1 soccer and win State Cups.”

So if every youth coach in the country thinks direct soccer should be avoided like political discussions at Thanksgiving, are they preparing their kids for some level higher than the World Cup? A Galactic Cup? When the aliens come to challenge us, will we stick with short passes and fancy footwork with the fate of our planet in the balance?

No one’s saying we should all abandon futsal and rondos. Players who are uncomfortable on the ball and can’t play short passes are going to be picked apart when they play at higher levels. The “buildout lines” that make U-9 and U-10 goalkeepers play to defenders are long overdue -- why teach pointless punts and long goal kicks that have a 50-50 chance of success and a significant chance of head trauma?

But you simply can’t take the athleticism, the driver of direct play, out of soccer. Diego Maradona doesn’t score that goal against England (not the Hand of God -- the other one) in 1986 if he can’t outrun Peter Reid, even with the ball at his feet, and his effectiveness through the years was inversely proportional to his waist size.

When you combine athleticism and skill, you get lightning-fast counterattacks that account for two of the most important goals in recent U.S. history. Rampone to Krieger to Lloyd to Rapinoe to Wambach in 2011 -- 16 seconds. One year prior: Howard’s NFL-worthy heave to Donovan, over to Altidore, center to Dempsey, rebound, and enables the invention of the viral video montage of Americans in bars, homes and streets losing their collective minds -- 12 seconds.

It’s not just the USA. Belgium’s 2018 winner against Japan traveled from Thibaut Cortois’ hand to the back of the net in 11 seconds.

Yes, we have plenty of evidence that any team that relies too heavily on direct play is going to hit a glass ceiling. In 2003, Germany stunned a partisan World Cup crowd in Portland by tactically and technically dismantling a U.S. team too reliant on the “whack it to Wambach” approach. But Germany also needed speed and aerial prowess to contain the U.S. attack and push the action the other way.

Youth soccer doesn’t require such balance. Teams can win by going to one extreme on the longball-to-shortball spectrum. Some coaches preach the possession gospel to attract talented players, and then we have a chicken-or-egg argument. Are they winning (with style) because the coach turned a random group of 8-year-olds into a U-16 juggernaut over several years? Or are they winning because the best players in the area flocked to the supercoach’s club?

On the other hand, the youth coaches who insist they can take a team of unathletic kids with minimal soccer aptitude and turn their 10-1 losses at U-9 to 4-3 wins in the top bracket of a U-14 tournament are selling snake oil. When it doesn’t happen, the coach looks like a liar, and the discouraged kids quit.

A piece from Left Foot Coaching Academy put it well: “You need to play direct to open up the indirect patterns, but you also have to teach the safety skills to go along with the technical skills of receiving and passing on the ground.”

Maybe if youth clubs advertise that approach, they’ll develop what the USA really needs. Complete players. And teams that can get the ball up the field quickly to set up those 1v1s or 2v2s they’re all learning in futsal.

youth
12 comments about "Have we been too harsh on direct soccer?".
Read more comments >
Next story loading