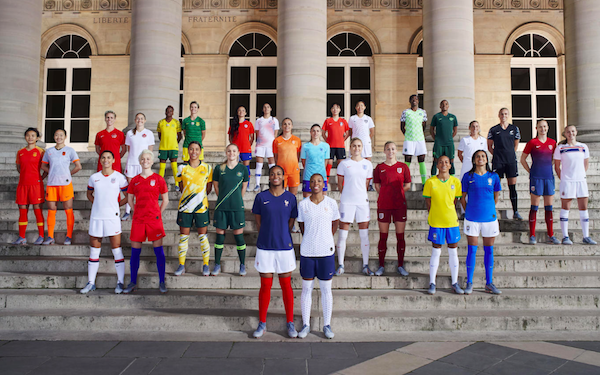 Nike introduced new home and away uniforms for its 14 teams at the 2019 Women’s World Cup, each made specifically for the teams in a bid to enhance the identity of the teams and their connections to players.

The jerseys were unveiled at an event in Paris. It underscored the growing importance manufacturers place on the women's sports market.

Reuters reported women’s footwear and apparel alone counted for nearly a quarter of Nike’s total revenue in the second quarter of the 2019 financial year.

Mark Parker, Nike's chief executive, said that “we believe this summer can be another turning point for the growth of women’s football.”

The U.S. jersey features three stars over the crest to highlight the USA's three Women’s World Cup championships. France and England are also Nike teams, so the Oregon-based manufacturer has the defending champion, host team and top up-and-coming team in the Lionesses, winners of the 2019 SheBelieves Cup.

Nike also announced a three-year deal with UEFA to promote women's soccer. UEFA is the richest confederation and only one with a full four-year cycle of events for women's national teams and the only established regional club championship for women.

The Paris event came three days after rival adidas, a FIFA sponsor, announced it would pay all its sponsored players on the Women's World Cup-winning team this year the same as it would pay the men.