Parents and coaches of young athletes generally have a sense that injuries happen more frequently in the teenage years than they did when the players were younger. A recently published scientific study following young male soccer players at an elite Dutch soccer academy shows that the injury risk is quite high. Although the study focused on male soccer players, I believe it’s reasonable to assume that similar risks would be present for females, and athletes in multiple sports. 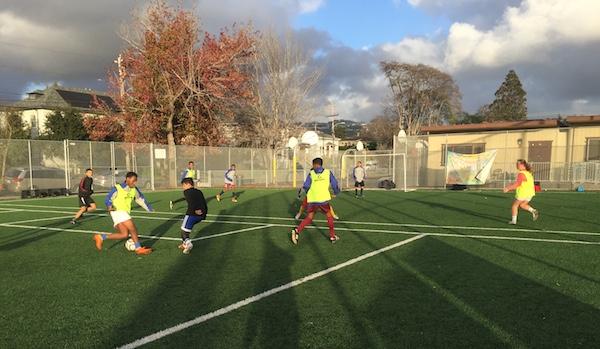 In this well-conducted study the researchers found a substantially higher injury burden in the U-16 (48%), U-15 (28%), and U-17 (21%) age groups compared to the mean. The six months following peak height velocity were identified as the riskiest time period.

Coaches of players in these age groups should pay particular attention to training load, early intervention for injury, and proper monitoring of return to play.

Peak height velocity (PHV) is defined as the moment of the largest increase in body height, and happens during puberty. It’s been suspected that a decrease in flexibility during the growth spurt may result in increased vulnerability to injury. There is additionally an adolescent “awkwardness” due to the rapid increase in the length of arms and legs relative to the trunk, which may result in low physical performance during this period.

Additionally, many youth clubs and leagues tend to increase the training loads and match frequency in these age groups.

In this study, the researchers followed 170 Academy soccer players at a professional Dutch club playing in the U-12 through U-19 age groups. The players were followed for a number of seasons and all players were required to report injuries to the club’s medical staff. Injuries were classified by body region, type, and overuse vs. acute. Injury severity was defined as the number of days that the player was unable to fully participate.

Coaches and parents in these age groups should be especially vigilant

While this study focused on male soccer players, I believe that it would be reasonable to assume that most young male and female athletes in multiple sports would experience similar risks in the six months following their peak growth spurt.

If you are a coach or parent of athletes in the U-15 through U-17 age groups, take some reasonable steps to try and minimize the risk of injury. It’s difficult to eliminate the 75% of acute injuries occurring during matches, but you can likely have a substantial impact in reducing the 25% of overuse injuries.

Monitor training loads and keep to as reasonable a level as possible. Understand the basics of injury recognition and when to remove an athlete from play.

Seek qualified professional help if you are truly concerned about an athlete’s readiness for play. Your early intervention can substantially reduce the number of days out in particular due to an overuse injury.

• I believe it’s reasonable to assume that similar risks would be present for females, and athletes in multiple sports.

• Coaches and parents in the U-15 to U-17 age groups should be particularly alert for overuse and acute injuries in the players.

Overuse Injuries: How parents can watch for the signs in their children

Making the game day 'go' or 'no go' decision

(Dr. Dev K. Mishra, a Clinical Assistant Professor of orthopedic surgery at Stanford University, is the creator of the SidelineSportsDoc.com online injury management course and the Good to Go injury assessment App for coaches, managers, parents and players. Mishra writes about injury recognition and management at SidelineSportsDoc.com blog, where this article first appeared.)