A good referee decision nixed by a woeful VAR verdict

The various shades and intricacies of VAR continue to intrigue -- and, yes, disturb me.

Let me start by making one point as clearly as I can: VAR does not rely on a computer to make its decisions.

Thus it is very different from goal line technology. Human beings are not necessary for GLT. The computer does all the work, tracking the ball, deciding (meticulously measuring, actually) whether all of the ball has crossed all of the goal line, and instantly sending out the appropriate signal: Goal or No Goal.

But VAR relies on human beings. Their job is to view, repeatedly if necessary, TV camera replays, and then make a decision as to the correctness the referee’s decision. No computers, no algorithms. Merely more human beings - more referees, in effect, with the enormous advantage that the referee on the field does not have: time to look at various angles of the play and to mull over his decision - before making it.

If that sounds as though the referee is being downgraded in his importance as the decision-maker, well, each of you, no doubt will have an opinion about that. What it definitely does mean is that VAR decisions must not be regarded in the same way that GLT are: as scientific facts that are computer-generated and therefore not to be questioned.

VAR decisions are made by human brains and are therefore fallible. The referee on the field has the right to overrule a VAR decision.

And so to Saturday’s English FA Cup game between Wolves and Manchester United. Near the end of the game, referee Martin Atkinson red-carded Man United defender Victor Lindelof for a sliding tackle that certainly involved a lot of contact with Wolves’ forward Diogo Jota. 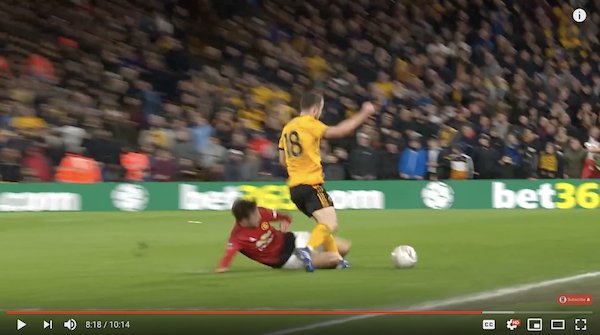 The decision was reviewed by the VAR team who took a more lenient view of the tackle and decided it warranted only a yellow card. Atkinson accepted the VAR verdict and Lindelof, reprieved, stayed on the field.

Did VAR get this one right? No, they did not. Nowhere near right. The VAR decision is frankly bewildering. Lindelof’s tackle was violent, ill-timed and very dangerous. It was committed out near the sideline, only a yard or two away from the halfway line - an area not normally considered a threatening part of the field.

The tackle looked to have all the requirements of a red card -- “excessive force, (exceeding) the necessary use of force and/or endangering the safety of an opponent.” The replays quickly showed Lindelof racing into Jota, sending him flying and making solid and potentially leg-breaking or knee-damaging contact with his planted left leg. 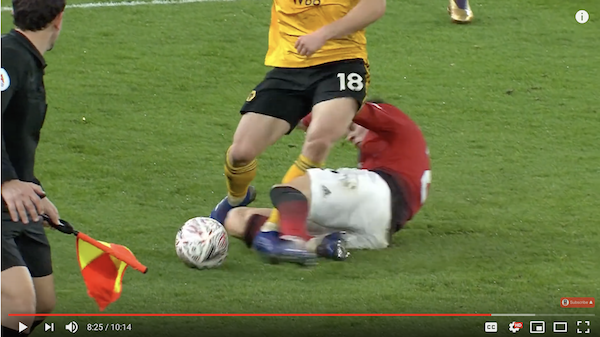 Yes, amid the mayhem he created, Lindelof did make contact with the ball -- in a thoroughly clumsy, almost incidental way. This was not what you would call a skillful tackle.

I remain totally baffled at what the VAR crew could possibly find to mitigate the red-card call.

The incident underlines a point that has always been a suspect part of the VAR setup. The VAR crew have the privilege and the luxury of a nice quiet booth where they can view various replays, stop and study them, and make their decisions away from the pressures faced by the referee on the field.

That sounds like game, set and match to the VAR guys -- but only if you consider that all the on-field pressure faced by the referee is a bad thing, that it must influence the referee in a negative way, that it must work against him making a correct decision.

If that is true, then it makes a pretty strong argument in favor of doing away with the game referee altogether and having all the decisions made in the serenity of the VAR booth. But no one is suggesting that. All sports work with on-field or on-court officials, and they do have one major factor in their favor. The obvious one that they are in the middle of the action - a position that allows them to feel the game, to sense the game, to pick up vibes and emotions, to hear things ... not just what players might be saying, but the other noises of the game. The noises of tackles and collisions, for instance.

An on-field referee will be experiencing a game at a different pace, and a different emotional level from the VAR crew. Consider the Lindelof case. Things were not going well for Man U. With just 10 minutes remaining they were trailing 0-2 and they were being outplayed by Wolves. They were about to be eliminated from the FA Cup. And they were certainly aware that they were playing poorly.

Factors which are virtually guaranteed to bring on feelings of frustration. An atmosphere detectable by the referee that would alert him to the dangers of players feeling that something assertive has to be done. A hefty tackle, for instance.

Is that what Lindelof’s tackle was? Very likely, I’d say. A nasty tackle born of frustration. Not one to be treated lightly. Referee Atkinson immediately showed the red. That was his response, his feeling that it was called for. I think he was exactly right -- and that the replay-analysts up in the emotionless VAR booth were quite wrong to get involved. It was not encouraging to see Atkinson so easily swayed by VAR.

Quite aside from its influence on this game -- very little, as it happens -- this was a seriously awful decision that raises rather frightening thoughts on what this particular VAR crew would consider “excessive force” and “endangering the safety of an opponent.”