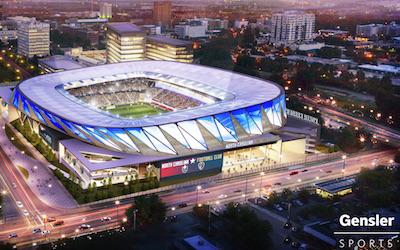 North Carolina FC -- Raleigh/Durham -- has been in the MLS expansion pack for more than two years, but it is changing its tune as it is making progress on securing a location for a downtown stadium.

In July 2017, Steve Malik, the owner of NCFC and the NWSL's Courage, revealed plans for a 22,000-seat facility that would be part of a privately funded $750 million mixed-use development just north of Raleigh's downtown area.

Now, Malik has been working with a developer at an alternative site for the Downtown and Entertainment Sports Center in an “opportunity zone” in southeast Raleigh and going through the approval process to secure $11 million per year for 30 years in interlocal funds to pay for the construction of a $150 million stadium. (Those same funds are being eyed to renovate the city's hockey and college basketball arena.)

MLS isn't coming to Raleigh any time soon -- it won't make the cut for the first 28 teams -- but Malik believes a soccer stadium is essential for the future of the sport in Raleigh and an important anchor to help attract other downtown development.

“I’ve been asked, ‘When are we going to get a pro team?’” Malik said in an interview with Neil Morris of WRALSportsFan. “There’s an awareness challenge in the market, that you either have MLS or you don’t have soccer. In a community where we have 14,000 kids playing in our youth club, soccer in this market is about a lot more than whether you just have an MLS club. We have a great club, and we’re going to have the best soccer club in the country, and it’s going to have pro soccer. Would an MLS franchise be great? Yeah. But we have soccer. We’re going to draw a lot better when we provide people with a better gameday experience in a downtown location.”