The USA beat Ecuador, 1-0, in the much-anticipated first game under new head coach Gregg Berhalter with a full contingent of foreign-based players. The USA's dominance grew as the first half went on, but it struggled after the break to find any rhythm against an opponent that showed no willingness to attack. The USA was, therefore, fortunate to get a goal on Gyasi Zardes' deflected shot in the 81st minute. 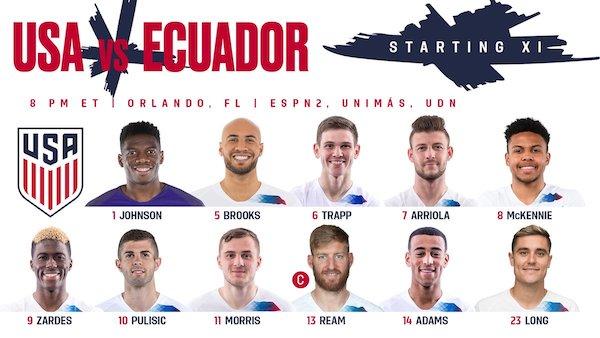 USA Player Ratings
(1=low; 5=middle; 10=high.)
GOALKEEPER
In his first U.S. start in more than five years, Sean Johnson faced only one shot all evening and it sailed over the goal in the first half. His improved foot work was a reason he earned a recall, and he did a good job as the USA worked to play the ball out of the back.

DEFENDERS
The back four made things easy for Johnson, allowing La Tricolor to penetrate only a couple of times. Both Aaron Long and John Brooks covered a lot of ground and won their individual battles. One of the few turnovers came late in the game after the USA went ahead, but Brooks bailed out Tim Ream, who was wearing the captain's armband for the U.S. for the first time. Right back Tyler Adams occasionally found himself pressing more than he should in midfield, but his boundless energy made up for it. The backline was rarely pressured on the ball by the Ecuadorans, who chose to sit in a deep block. Ream showed off his passing ability, finding Zardes on the game's only goal.

MIDFIELDERS
In the first half, Wil Trapp was the most effective U.S. player, running the attack and frequently finding Paul Arriola open on the left wing. But a knock to the thigh picked up late in the first half tightened up and he had to be subbed early in the second half. Christian Pulisic and Weston McKennie both worked hard to break through the Ecuadoran backline without much success. Pulisic, who laid a ball off to Arriola for the USA's best chance in the first half, was ineffective after the break and taken off after an hour in a planned substitution. Shortly thereafter, McKennie had to leave the game after falling badly on his ankle. It was so bad a cart had to come and deliver him to the U.S. bench after he was substituted.

FORWARDS
At center forward, Gyasi Zardes worked hard in the first half to unlock the Ecuadoran defense. His perseverance was rewarded late in the game when he fired a speculative shot from 25 yards that deflected off Robert Arboleda's foot and high into the air, skimming off the underside of the crossbar and over helpless goalkeeper Alexander Dominguez. Paul Arriola saw a lot of the ball but failed to put away the best chance of the first half. Jordan Morris looked uncomfortable in the role of the right winger though he had the best cross of the first half, finding Arriola for a goal called back for offside.

SUBSTITUTES
The game had already begun to slow down in the second half before the early substitutions. Michael Bradley and Sebastian Lletget controlled midfield and made few mistakes but couldn't break down the determined Ecuadorans. DeAndre Yedlin replaced fellow Seattleite Morris and showed glimpses of promise in his new role of winger in front of Adams. Cristian Roldan came on after McKennie's injury while Jonathan Lewis was a late sub for Arriola.

TRIVIA. The USA won its third straight game since Berhalter took over as national team coach. The only other coach in the modern era to start his tenure with three wins was Bob Bradley in 2007.