USA-Ecuador: At least it's a start, a good start 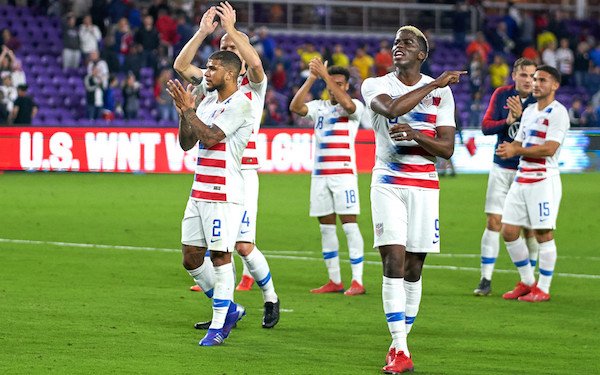 The USA didn't blow anyone's socks off in its formal coming out party under new coach Gregg Berhalter, but the 1-0 win over Ecuador Thursday night in Orlando is a start.

And given what the national team program has been through the last four years under three different coaches and with the embarrassment of failing to qualify for the 2018 World Cup, it will take small victories like Thursday's win that came thanks to a fluke goal by Gyasi Zardes.

Berhalter's young team, which included 20-year-olds Christian Pulisic, Weston McKennie and Tyler Adams starting together for the first time, was rewarded for at least trying to play, something it has rarely done in the last year and a half. Berhalter lined up five attacking players, encouraged Adams to move into midfield at every possible opportunity for another attacking threat and used his holding midfielder, Will Trapp, as the playmaker.

The USA put on its best performance since the 4-0 win over Panama -- also in Orlando -- in October 2017, four days before its world came crashing down when it lost to Trinidad & Tobago, 2-1, and was eliminated from the World Cup.

The coach on the opposing side then and now in Orlando was Colombian Hernan Dario Gomez, which might explain why Ecuador showed no interest in coming out and playing on Thursday. Panama tried to play and got blown out, losing by four goals on an evening when even Gomez said it could have been 10.

Ecuador was a far tougher opponent than the weakened teams Panama and Costa Rica brought this winter for the USA's first tests with MLS players under Berhalter, but it sat back and defended in a low block. In many ways, La Tricolor, which had lost just once in six games under Gomez, was a perfect test for the new-look USA, showing how well Berhalter's possession-based game could operate and what were the limitations.

The USA completed 602 passes -- more than it completed in its two previous games against South American opponents combined -- 297 against Peru and 243 against Colombia in October 2018. But its efforts translated into a paltry five shots and two shots on target.

Part of that was Ecuador. It's hard to "disorganize" your opponent -- a favorite Berhalter expression -- when it has eight or nine players bunkered in the final third of the play. Berhalter's young players showed patience and confidence to stick with what he wanted them to do, but most of them are still too direct in their approach to rattle an athletic team like Ecuador.

Berhalter was encouraged by what he saw, though.

"On the day, if we’re a little bit sharper on some plays, a little bit more precise, then we end up breaking them down." he said. "What I really liked from the guys is the effort to continue trying to break them down in the way that we’re giving them."

Berhalter admitted he tried to introduce a lot of new ideas to his players, some who didn't arrive in camp until the middle of Monday.

“Overall, when you look at the amount of information we’ve given the guys in the last two days," he said. "we’re pleased with the performance. I think it’s a good starting point for this group."

Almost to a man, Berhalter's players echoed what he said.

“I think we had some good moments," said Pulisic, "but we didn’t expect to be perfect and we still have a lot of stuff we can work on. But it was a good start.”

men's national team
5 comments about "USA-Ecuador: At least it's a start, a good start".
Read more comments >
Next story loading