Germany beat the Netherlands in Amsterdam this past Sunday in a magnificent game that served up five goals, an invigorating Dutch comeback, a beautifully engineered last-minute winner, and a candidate for goal of the season from Bayern Munich striker Serge Gnabry. The away team's 3-2 win in its first game of the qualifying phase for next year's European Championship was all the more remarkable because it came less than six months after an abject 3-0 defeat against the same team, in the same stadium. What changed? 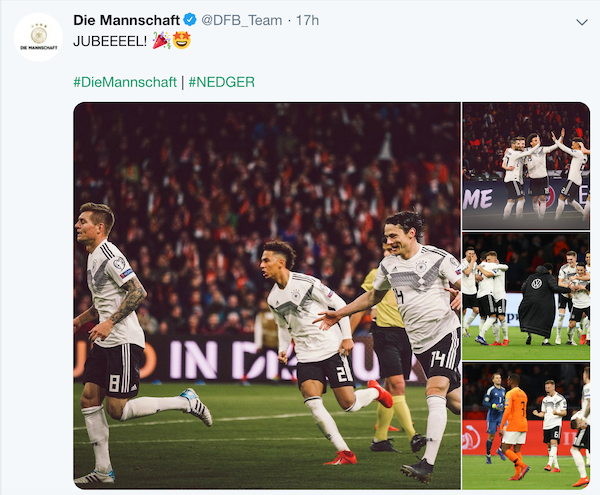 In short, Germany has joined the rush for youth. The Dutch team that ran out at the weekend featured almost the same lineup that played last October. Back then, the German press commented on how the Netherlands had cast off the old guard and renewed its roster with exciting young players. Germany coach Joachim Löw's starting XI this time featured just four players who played last fall. He finally paid heed to what many had been saying even before the 2018 World Cup -- the squad that had become world champion four years earlier was now too old, slow and tactically set in its ways to compete on the international stage.

Three particular players who were chosen to play against the Netherlands last fall were dropped by Löw this time around. Bayern's Thomas Müller (100 appearances for Germany), Jerome Boateng (76), and Mats Hummels (70) were all world champions in 2014, and all boast long and successful careers at both club and international level. Even after Germany's unprecedented elimination in the group phase in Russia, Löw announced that he was standing by them. Then he changed his mind.

Löw went especially to Munich to tell the players that they were dropped, and that he was not planning to recall them. He made sure that the news was not leaked beforehand, so that the players heard it directly from him, and not from the press or via twitter. I thought this showed some class, but apparently the players were not best pleased, and none of the three has yet announced his international retirement. They still think they're good enough. The German media and many ex-internationals criticised Löw for treating the Bayern pros with apparent disregard, and wondered why the cut-off was so final. What if there was a sudden injury crisis?

Even if there was, there is no shortage of young players in Germany to step up ahead of the old guard. If those inexperienced players were yet not of the same caliber, it might not matter all that much. It's more important to grant them valuable experience and prepare them for the future than worry about the bruised egos of men whose careers are winding down. Löw has belatedly recognized that at soccer's highest level, loyalty has its limits. Against the Netherlands, the new policy yielded quick rewards.

Almost all of the major squads in Europe are undergoing a similar process. The Dutch we've already mentioned. A young England rejuvenated by a decent World Cup run beat the Czechs 5-0, and by the final whistle they had two 18-year-olds on the field in Jordan Sancho and Callum Hudson-Odoi. Moise Kean, also 18, became the second youngest player to score for Italy. Spain has pressed the reset button now that its triumphant generation has faded from view. And the United States is finally on the path to producing the more dynamic and eye-catching kind of player that will hopefully drive a revival of the national team and allow us to forget a static, moribund decade.

This is where the international game proves to be more interesting than the club game, because economics play a minor role. You can not buy an international player for $100 million. While federations to some extent depend on on-field success for financing, there are several other factors at play, such as national pride, the long-term development of the game, and a diminished emphasis on silverware. That is, a momentous run to the World Cup final as experienced by Croatia last year is not deemed a failure because they lost to France. It's a thrilling part of the country's history, and probably inspired hundreds of thousands of Croatian kids to kick a ball.

There are still old hands helping to steer the next generation, such as Toni Kroos and Manuel Neuer for Germany, Sergio Ramos for Spain, and Michael Bradley for the U.S. The reflexes, speed and fitness now necessary to play the game at this level, however, has meant a shot of young blood to international soccer that could make the 2020 European Championship a tournament for the ages. A competition that will be less adulterated by the commerce, hype and brand fixation of the generic super-teams in the Champions League, and more focused on the style, character, color and unpredictability of sublime youth.