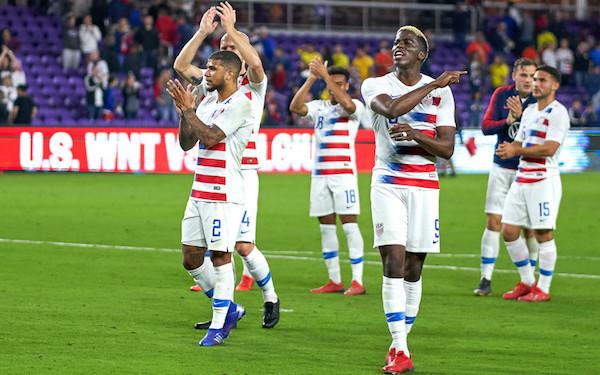 U.S. men's national team coach Gregg Berhalter told his players last week the two games they will play in March will be the most challenging they will face under him because of their lack of time together.

After the 1-0 win over Ecuador, which came thanks to a fluky goal scored by Gyasi Zardes late in the game, the USA will face Chile on Tuesday night in Houston.

"If we're positioned well enough," Berhalter said after the Ecuador game in Orlando, "like we were for most of the game, I think we'll be OK."

Chile will be the USA's toughest test yet. Indeed, La Roja is rebuilding after missing out on the 2018 World Cup. But that says as much about the competition in South America as it does about Chile's own failings. Like the USA, Chile is rebuilding but brings a squad that includes five starters from the team that won the 2016 Copa Centenario.

Chile will present a look that the USA has not faced yet.

“We know that they’re a really, really good team that will come out and press us hard,” said U.S. forward Jordan Morris. “They’re a very high-pressing team and they work hard collectively. They’re going to present a really good challenge for us.”

Ecuador sat back the entire game, ceding possession to the USA, which allowed its defenders to move the ball around comfortably. Against Chile, the USA will learn very quickly just how good it is at the possession game Berhalter wants it to play. He sees Chile's pressing game as an opportunity -- which Mexico exploited in the second half of a 3-1 win on Friday in San Diego

“It’s up to us to take advantage of that,” he said on Monday. “What I mean by that is we need to be brave enough to play, we need to make them expend energy. We want to be able to play through pressure. We know there’s going to be times where it’s going to be difficult. We want to set up to give them problems and then it’s just about the right moments that we’re able to play through them and get opportunities. That’s the key.”

The other challenge for the USA is that it will be without Tyler Adams and Weston McKennie, two of its young Bundesliga stars. Both have returned to Germany, Adams as part of an agreement with RB Leipzig to bring him in only for the Ecuador game and McKennie after suffering an ankle injury against Ecuador that could potentially sideline him for the rest of the season at Schalke 04, which is battling relegation.

Berhalter said he would make a "bunch" of changes, confirming that Ethan Horvath will get the start in goal, as part of his goal to get information on more players in different circumstances.

“Any time you have a new group of players," he said, "I think there comes challenges. We’ve been giving them a lot of information. The idea of this camp was to kind of meld the experienced guys with some inexperience and see how we can bring everyone along in the right way.”