For the first time since Gregg Berhalter took over as head coach, the U.S. defense came under intense pressure and the possession-based game he has preached quickly went out the window. The USA was lucky that Chile did not take better advantage of its openings, and it held on for a 1-1 tie, its first blemish after three wins under its new coach. The first half was a wide-open and entertaining game, but the Chileans slowed down in the second half, as they had done in their 3-1 loss to Mexico on Friday, and after the USA switched formations. The game was marred by another injury to one of the USA's young stars. Christian Pulisic, the U.S. goal-scorer, exited the game as a precaution in the 35th minute with a quad injury. 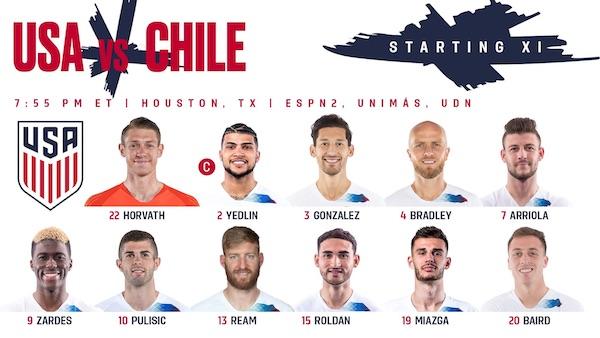 With Zack Steffen sidelined, Berhalter gave Sean Johnson and Ethan Horvath each one start in goal in the March friendlies. Horvath only faced three shots against the Chileans, who struggled to put their chances on target. Horvath's distribution wasn't perfect, but he did well to find Gyasi Zardes on the play that led to the U.S. goal.

Berhalter's plan was to see as many new players as possible in the two March friendlies, so only Tim Ream at left back remained from the back four that started against Ecuador. DeAndre Yedlin, Matt Miazga and Omar Gonzalez all got their first starts under Berhalter, but they looked uncomfortable on the ball and struggled in the first half. Both Miazga and Gonzalez had chances to stop the Chilean attack that led to Oscar Opazo's tying goal five minutes after Pulisic put the USA ahead.

Christian Pulisic opened the scoring in the fourth minute when he ran on to a pass from Zardes and chipped the ball over Chilean keeper Gabriel Arias. With a better last touch, he might have had a second goal. His injury was unfortunate as he finally seemed to be enjoying himself for the first time in a long time in a U.S. uniform. Michael Bradley was the best U.S. player, completing 61 of 67 passes, including a long pass that Corey Baird could have put away in the 44th minute. Cristian Roldan started in place of injured Weston McKennie and had a lot of work to do to keep up with the Chileans.

Gyasi Zardes had the winner against Ecuador but saw a lot more of the ball against Chile and was a thorn in its side. He assisted on Pulisic's goal and had a good chance himself in the 55th minute that he put over the goal. Corey Baird, who started on the right wing in place of Jordan Morris, should have done better on a great ball Bradley played over the top to him. Once again, Paul Arriola had his moments on the left wing but saw less of the ball than he did against Ecuador.

Sebastian Lletget came on in the first half after Pulisic was injured, but he failed to have an impact in the game.  The moves to bring Daniel Lovitz on for Baird and Wil Trapp for Arriola were intended to shore up the U.S. midfield and they did the trick. Neither of the late attacking subs, Jordan Morris and Jonathan Lewis, had any chances.

TRIVIA. At the age of 20, Christian Pulisic became the youngest men's national team player to score 10 goals. Making his 25th appearance, he also became the second fastest to score 10 goals by caps, trailing only Clint Mathis, whose 10th goal came in his 23rd appearance -- the 1-1 tie with host South Korea at the 2002 World Cup.