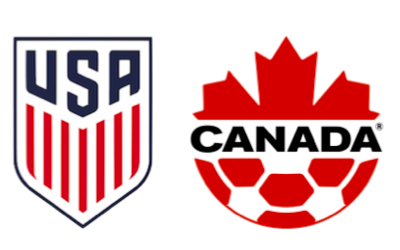 USA-Mexico has been the North American soccer rivalry for last quarter century, topped by their meeting at the 2002 World Cup in South Korea, but USA-Canada -- at least on the men's side -- has been on the back-burner after the neighbors were frequent competitors for 40 years in World Cup qualifying.

The USA and Canada will enter a new era when they meet this fall in the Concacaf Nations League. They were drawn with Cuba in one of four three-team groups in League A, the top tier of three tiers in the new competition.

The three teams will meet in home-and-away series over the three FIFA windows in the fall. The group winner will advance to the Concacaf Nations League final four in March 2020 while the last-place team will be relegated to League B for the next Nations League competition.

Canada is the USA's oldest Concacaf opponent in a series that dates back to 1925. The series can be divided into two parts: before and after 1985.

For years, Canada dominated the series, which included meetings in five World Cup qualifying campaigns, but the last of its eight wins came in 1985 when it won, 2-0, in a friendly game played in Vancouver. Since then, the USA hasn't lost a game, a span of 17 games (nine wins and eight ties).

Here are five games that define the USA-Canada series:

Dec. 22, 1976. Canada 3-0. A surprise tie between Mexico and Canada in Toluca on the final day of play in the second round left the USA and Canada tied on points and goal difference -- goals scored weren't yet used as a tiebreaker -- so they played a single-game playoff three days before Christmas in Port-au-Prince, Haiti, to determine the second team that would join Mexico in the final round of qualifying.

In a testament to the soccer support that exists in Haiti, a crowd of 32,869 fans turned out at the Stade Sylvio Cator to watch the USA and Canada play. The USA was the favorite, but nothing went its way.

Al Trost, one of the top midfielders in the burgeoning NASL, got food poisoning, tried to play but was so weak he asked to substituted at halftime. By then, Canada had taken the lead when a shot by Brian Budd hit Trost's knee, bounced off the post and then the crossbar before crossing the goal line. In the second half, Steve Pecher was red carded and the Canadians scored two more goals.

What made the defeat so crushing was that, for once, the lack of preparation could not be blamed on the defeat. The USSF spent $200,000 on the qualifying campaign, an unheard-of amount of money.

Oct. 25, 1980. Canada 2-1. Four years later, the USA, Canada and Mexico met in North American group play for the third straight qualifying cycle, and again the USA finished last. Its campaign was effectively over when it lost to Canada, 2-1, in Vancouver after they tied, 0-0, in the group opener in Ft. Lauderdale.

This was the height of the NASL and there was little interest in the national team like there is today. Players came and went as they were recalled by their NASL clubs -- for offseason tours. A dispute between the players and the USSF -- they wanted a $50 increase in their weekly allowance while on tour in Europe, the federation offered $35 -- almost ended in a player strike. (Rick Davis offered to cover the difference as a "donation" to the federation, which declined the offer.)

Later, U.S. national team coach Walt Chyzowych blamed hard feelings among his players for their positions on the strike for not getting along on the field and not passing the ball to each other.

May 30, 1987. USA 3-0. The USA's win over Canada in Olympic qualifying at the St. Louis Soccer Park is not in the record books as a full international, but it should be. (All teams from outside Europe and South America were allowed to field their full national teams, pros and amateurs.)

The U.S. victory, which came thanks to two goals by Paul Krumpe and one by Jim Gabarra and erased Canada's 2-0 advantage from the first leg, was the pivotal result in the modern history of the men's national team.

It allowed the national team to continue on in qualifying and eventually go to the 1988 Summer Olympics in South Korea -- but more important, it was the incentive for the federation to adopt a full-time national team program for players just coming out of college but with no place to play because there was no outdoor pro league of any significance. Two years later, the USA qualified for the 1990 World Cup, ending a 40-year drought, and and the full-time program remained in place until the 1994 World Cup.

Just as important, a full-time national team began barn-storming the country, playing in places it had never been to before and growing support for the team that had never existed before.

Nov. 9, 1997. USA 3-0.  Before 1997, the USA and Canada had met 11 times in World Cup qualifying, and the Canadians had a huge edge: six wins, three ties and only two losses. But that changed with the Hexagonal -- the first time Concacaf's final round consisted of a six-team, home-and-away series -- where the USA beat Canada, 3-0, in both games.

The USA had won only two of its first seven games, but the second win over Canada at Swangard Stadium in Burnaby a week after the USA tied Mexico, 0-0, in Mexico City with 10 players clinched a berth in the 1998 World Cup finals in France. And it did so with a game to spare -- which was the norm for the USA until 2017 when qualifying went down to the wire and -- well -- we know what happened ...

For Canada, it was also the first and only time it played in the Hexagonal.

Only 7,241 fans were on hand at the Rose Bowl, but they saw one of the greatest feats of goalkeeping in Gold Cup history.

The USA outshot Canada, 36-10, but Canadian keeper Lars Hirschfeld made 15 saves to send the game to a shootout.

Two years earlier at the Gold Cup, the USA lost on penalties to Colombia in the quarterfinals. It had not taken penalties in practice prior to that game. The day before playing Canada, the Americans took penalties and they were perfect. They prevailed thanks to Kasey Keller, who had studied Canada's penalty kicks in its quarterfinal win over Martinique and saved two of Canada's four attempts.

The USA went on to win the 2002 Gold Cup, and 11 players who played in the semifinal against Canada went on to play in the 2002 World Cup, where the USA reached the quarterfinals.