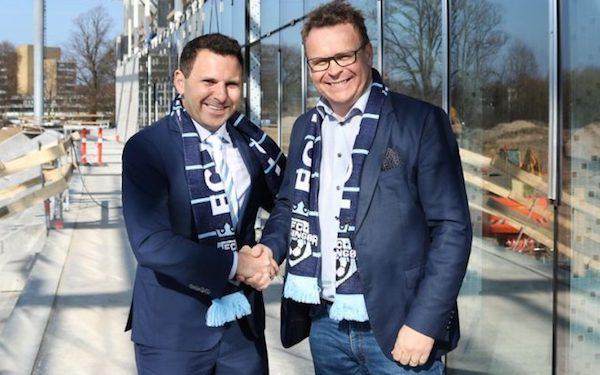 American investors have been buying European soccer clubs for decades, so the news of FC Helsingor's majority acquistion by an investment group led by Jordan Gardner isn't startling except for one fact: The group intents to use the club as a home for developing American talent.

The idea of buying a team to develop talented players from another country is nothing new.

Eupen, a top-flight Belgian club in a small, German-speaking town, is known as a Qatari soccer factory, signing players from the Aspire Academy, the Qatari-financed development program. The New York Times reported last year on FC Stumbras, which plays in Lithuania’s A Lyga and operates on the fringes of the European game, buying and selling players for profit.

The American investment group includes investors with stakes in teams in the NBA, MLS, USL as well as teams in Europe ...

Gardner told Forbes.com he and his partners were investing 7.1 million Danish Kroner ($1.2 million) in Helsingor to purchase a 51% interest in the club.

They view Denmark as an attractive starting point for young Americans. Gardner was at the U.S. U-23 and U-20 camp in San Pedro del Pinatar, where three Danish-based players took part: Jonathan Amon of FC Nordsjaelland and Emmanuel Sabbi and Christian Cappis of Hobro.

Amon, who made his senior national team debut last fall, moved to Denmark to attend the Kies School, a sports boarding school. Sabbi joined Hobro after starting out his pro career in Spain, while Cappis, who scored in both U.S. U-20 games, signed when MLS rules on Homegrown rights blocked his efforts to join FC Dallas from its academy.

FC Helsingor, based in the port city of Elsinore near Sweden, was only founded in 2005 and has been struggling recently. It was relegated from the Superliga in 2018 after one season in the elite and sits in the relegation zone of the second division with 10 games to play. It has a new 4,000-seat stadium that it expects to open this summer. Its current team consists entirely of Danes except two Brazilians.

FC Helsingor CEO Janus Kyhlsaid the goal is to build on the club's reputation for developing players from the North Zealand area who might have fallen "through the cracks" elsewhere and to bring over Americans overlooked by MLS clubs.

"We are confident," he said, "that there are some good players over there who we can introduce to European football and get their talent redeemed."

Kyhl will remain the club's CEO, while Gardner will initially serve as chairman of FC Helsingor's corporation.

“I’m incredibly excited to complete the acquisition of a majority stake in FC Helsingor," said Gardner. "The ownership group we have assembled is as strong as any you will see in global soccer, and we are eager to leverage the connections and expertise we have to make Helsingor the next hub for football talent development.”