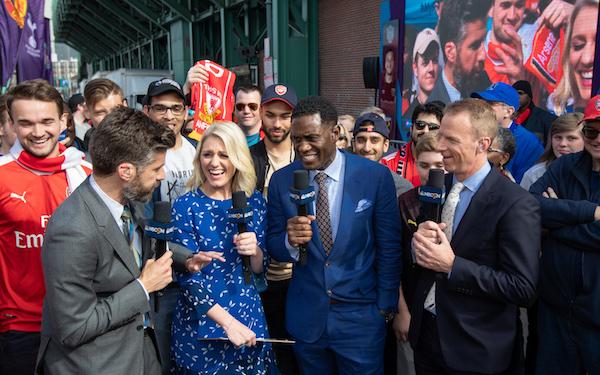 NBC Sports Group started its Premier League coverage in the 2013-14 season on a three-year, $250 million deal; two years later, the deal was re-negotiated to a six-year deal worth about $1 billion, almost doubling the asset's value. Though thousands of miles away, the Premier League has grown into one of the most watched soccer league in the United States, and much of its rise can be attributed to NBC Sports' devotion to the property, exemplified through events like this weekend's fan fest next to Fenway.

A uniquely Boston-focused story. In its third edition this season and the first ever in Boston, the festival culminated in Liverpool vs. Tottenham, a perfect ending for a sports town whose favorite foreign soccer team may well be Liverpool FC. LFC Boston, the city’s official supporter group, has 7,801 followers on Facebook – the next closest foreign team is Arsenal, with 2,671 followers.

“[Boston] is sports town,” Dan Palla, Director of Consumer Engagement for NBC Sports said. “But the connection that's unique is the Fenway Sports Group and Liverpool. Coming into the portion of the season where every single match matters, the idea that the match we're watching now has a huge impact on who lifts the trophy is a uniquely Boston-focused story.”

The stoppage-time own goal winner — and the revival of Liverpool’s title hopes with it — was not lost on the vastly majority Liverpool fans who filled bars and pavement on an entire closed-off Lansdowne street. An American rendition of “He’s Virgil Van Dyke,” drowned out the few Tottenham fans who celebrated with glee 20 minutes before, hoping to be the ultimate rain on an otherwise all-Red parade.

It was a party atmosphere throughout the day: Sheamus’ red mohawk and Liverpool crest bicep tattoos hyped up fans as hot dog and pretzel stands kept them full. At Casket ‘n Flagon, kids flocked to a skills challenge, a tattoo saloon, a photo booth -- and two Premier League trophies. At Game On, a bar across the street, families played corn hole, ping pong and massive connect four. According to Palla, it’s all part of the gold rush that NBC Sports sees in the Premier League. Redeeming the American Premier League experience out from dark bars and into the light of day is a crucial part of their strategy.

“I lived in New York City and being in supporter bars, I didn’t realize that scene existed right around the corner from where I lived,” Palla said. “The games are in the morning, they're played in England, and it's just really difficult to really get it on display, especially as we can consume it. The idea was to see if public demand would be there. We very quickly realized that we were on to something.” 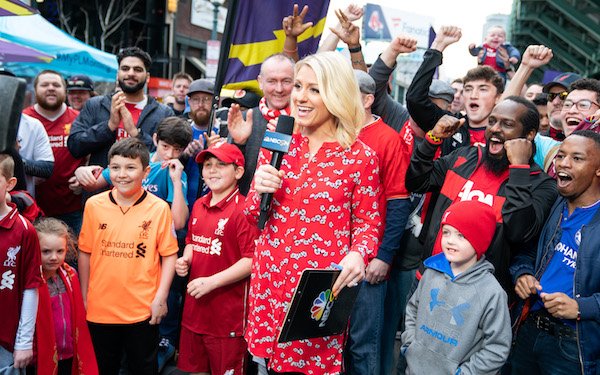 “We've got 6-7 clubs with boots on the ground here," added Palla, "and all 20 clubs have donated all of the merchandise to give away to the fans here. [Every Premier League club] who gets a chance to see it, to experience it on TV, they see we're just scratching the surface on how epic this really could be.”

For the games on Saturday and Sunday, NBC reported over 12,000 total fans in attendance. Robbie Mustoe, an ex-Middlesbrough player-turned-analyst for NBC Sports Soccer, lived in Boston for over a decade and has seen soccer grow stateside for years.

“I'm sure there are lot of people watching Premier League 10 years ago. But with [NBC] bringing it, there are more games available,” Mustoe said. “It's certainly growing. We laugh that we get recognized on the street now than we probably ever did [as players].”

On Saturday, the New England Revolution played against Minnesota United in Gillette Stadium in Foxboro, 27 miles south of downtown Boston, garnered an announced crowd of 11,571 fans. The comparison is apples to oranges, but it is worthy to mention: in an already-crowded sports market, the Premier League invasion -- aided and fortified by NBC Sports -- continues to keep fans enthralled with foreign soccer rather than domestic. New England Revs’ biggest supporter groups, Midnight Riders and The Rebellion, have 2,920 and 3,342 followers on Facebook, respectively, compared to Liverpool’s nigh-8,000 aforementioned supporter group following. 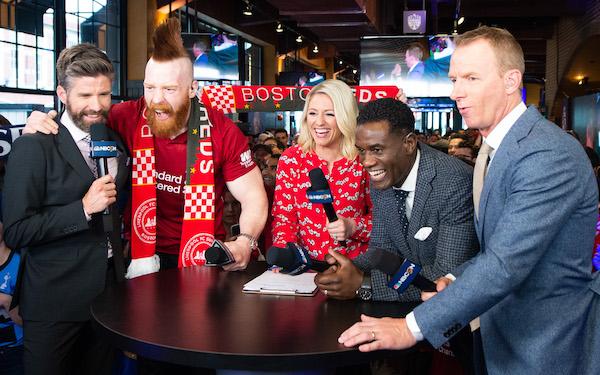 Easy to find. At least that’s how Michael Enko, a Liverpool supporter at the Casket ‘n Flagon bar, saw it. Enko’s a member of LFC Boston, and cited the Fenway Sport Group’s ownership of Liverpool as reason for his allegiance to the Reds.

“It's tougher to follow teams from other leagues,” Enko said. “They're not as available, it's harder to find them on TV. It's a big part of why the Premier League is the top league to watch in the United States.”

In an American soccer culture that’s often divided between Euro-snobs and MLS fans, Enko added that while he sees MLS making strides, the difference in product is hard to ignore.

“[Soccer] is not the same as it is in Europe," he said. "Maybe once the sport starts to pick up. I think the MLS is making good strides -- less of a retirement league -- they're getting some good young players like [Miguel] Almiron [who now plays for Newcastle in the Premier League]. They’re moving in the right direction, so we'll see how it goes in the next 5-10 years.”

For now, though, Enko is happy to chant American renditions of Liverpool songs alongside his fellow Bostonian Kopites.