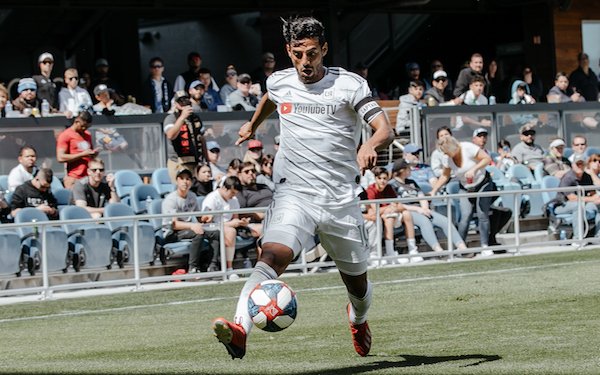 The weekend ahead has a lot to follow for American fans as both the European and domestic leagues offer a full slate of games with intriguing storylines.

The sixth week of the MLS season brings us great games among the league’s best teams and among the best teams at playing top young players. In Europe, where most leagues are now in their final weeks, other Americans find themselves in relegation and promotion battles.

Here are the 10 best games to follow from an American perspective.

The first high-profile matchup of the 2019 MLS season will take place on Saturday afternoon when D.C. United hosts Los Angeles FC at Audi Field. Both teams deservedly sit atop their respective conferences and clearly seem to be a step beyond the rest.

The quality in both of these teams has been building since last year. Wayne Rooney, Luciano Acosta and Paul Arriola boost a strong D.C. United attack while LAFC match it with Cristian Ramirez, Diego Rossi and Carlos Vela – who has been the best player in the league so far.

For American fans, there could be as many as three potential players on the U.S. Gold Cup team involved in the game with Arriola on D.C United and Walker Zimmerman and Ramirez on LAFC.

This will be an important measuring stone for each of these teams as well as a chance to make a statement.

The numbers for Tyler Adams at Leipzig continue to get better every week. Of course, the former Red Bull had an outstanding assist last week which earned him a wave of headlines, but it’s the defensive numbers that are even more impressive.

Leipzig now has the most impressive defense in the Bundesliga by a very large margin. The 20 goals conceded over 27 games is the lowest in Germany’s top flight. The second lowest is Bayern Munich which has conceded 28 goals

Adams missed the midweek German Cup win over Augsburg with a thigh injury but he could see the field on Saturday against a very good Leverkusen team that sits in seventh place and is in a tough race to qualify for the Europa League next year. Playing away at Leverkusen would be the toughest test for Adams since joining RB Leipzig but a result would strengthen Leipzig’s grip on a Champions League spot for next season.

For Americans in England, there really is that much excitement at the moment. DeAndre Yedlin and Newcastle United are in midtable. Tim Ream and Fulham along with Danny Williams and Huddersfield are already relegated.

Derby County’s push to get promoted is one of the better stories for American fans since Georgia-born attacking midfielder Duane Holmes has been front and center of the team’s push. Holmes wants his first ever U.S. call-up and performances like he had last weekend in a 6-1 win over Rotherham United will only help where he had a goal and an assist.

Derby is currently in seventh place and trails sixth place Aston Villa for the final promotional playoff spot by a point -- and Derby also has a game in hand. Awaiting Derby will be 13th-place Brentford, which has just one point from its last four games.

One of the more positive trends in MLS in 2019 has been the increased amount of young domestic players who have been seeing meaningful minutes. Even more impressive has been that several of these players are playing attacking positions.

But there are plenty of others who will take part. Dallas will also start Jesus Ferreira, who had a goal and was part of the buildup to another in last week’s 4-2 win over Real Salt Lake. Unfortunately for Ferreira, his citizenship did not come in time for him to be considered for the U.S. U-20 World Cup team but he could emerge for the U.S. U-23 team in the months ahead. Dallas defensive midfielder Edwin Cerrillo is also a regular starter and could be part of the U-20 team in Poland.

The U.S. U-23 teams defense will also be well represented by Dallas right back Reggie Cannon or Philadelphia central defender Austin Trusty.

Along with bench options like Philadelphia’s Mark McKenzie and Anthony Fontana or Dallas’ Thomas Roberts, Saturday’s game will be a huge display of some of the best young American players in the game.

Not to mention, both teams are also playing solid soccer while playing young players. Both Dallas and Philadelphia sit in fourth place in their respective conferences. So the game will also have three important points at stake.

The most improved American player in the early part of 2019 is easily Erik Palmer-Brown. The former Sporting Kansas City defender has reminded fans of his high ceiling in recent months. While NAC Breda is destined for relegation out of the Eredivisie, Palmer-Brown remains a prospect with a bright future and his performances in 2019 has put him in a good position for a better loan next year from Manchester City.

It is a good game for American fans to watch to monitor Palmer-Brown’s progress because he will likely be a big part of the U-23 team and eventually possibly the full U.S. national team. Heracles on the road will be a tough test for Palmer-Brown as Heracles is in a push to get into the Europa League playoff places of the Eredivise.

Last year Romain Gall scored 12 goals in Sweden’s top flight. Six of the goals were scored when he was with GIF Sundsvall and six were scored with Malmo after a midseason transfer. On Saturday, Gall will visit his former club in hopes that he can put on a solid performance to impress his former coach in Columbus, Gregg Berhalter, who is now the manager of the U.S. national team.

Gall, 24, did not play in Malmo’s Allsvenskan opener last weekend but should see more minutes as he was one of the league’s leading scorers in 2018. But the opportunity to play against GIF should be an emotional one for him and it should important as he wants to get into the national team picture again after earning his first cap last November.

Tim Weah has struggled for minutes the past six weeks but the New York native earned a rare start on Wednesday and scored a goal in a 2-0 win over St. Mirren. Fortunately for Weah, those points have given Celtic a 13-point cushion atop the Scottish Premier League table and two wins could clinch the title. With that much room for error, the leaders perhaps will have the freedom to give Weah more minutes.

There could be plenty of incentive for Celtic to play Weah since the American forward expressed an interest in extending his stay in Glasgow for another loan.

“I feel like it’s a possibility,” Weah said of remaining with Celtic beyond this season. “It’s something me and my family have to go over at the end of the season. I am loving it here so far so we just have to see what happens. I’m really positive about the situation, happy to be at the club and making the most of these opportunities. When I do get game time I just try to help the team and be positive, and I try to get a goal and help the team when I can.”

“That’s been my mentality from the start and it’s going to be my mentality until the end of the season. I am really happy and just blessed to get the opportunities I’ve got so far.”

Last week, Alejandro Pozuelo had one of the most entertaining and impressive debuts in MLS history when the Spaniard scored two goals and added an assist in Toronto FC’s 4-0 win over New York City FC. His first goal came from a Panenka penalty and his second will be one of the league’s goals of the season from a remarkable chip over Sean Johnson.

This game will be interesting to watch to see what Pozuelo can do for an encore. Toronto has won each of its three games to start the season and looks more like the 2017 version of the team.

The addition of Pozuelo and the return of Jozy Altidore from injury have give the team a potent attack. For Altidore, his comeback from surgery is of particular interest for American fans since he will likely be a big part of the U.S. Gold Cup team. Michael Bradley has also played well to start the year and Chicago’s Djordje Mihailovic is a promising No. 10 who will also likely lead the U.S. U-23 team.

Andrija Novakovich, 22, has eight Eredivisie goals and one Dutch Cup goal so far this season for Fortuna Sittard on loan from Reading FC. It has been a positive loan by any measure as the Wisconsin native has helped Fortuna Sittard in a strong chance of avoiding relegation after earning promotion last year.

But the club has been drifting back towards the relegation zone in recent weeks and now is just five points from automatic safety. PEC Zwolle is only just two points ahead of Fortuna Sittard in the table and is a beatable opponent. Three points would likely make Fortuna Sittard’s survival a foregone conclusion.

When Wolfsburg hosts Hannover 96 on Saturday, there is an obvious American angle as John Brooks and Wolfsburg will have a chance to move into the top six of the Bundesliga and into the Europa League positions. Right now, only goal differential separates Wolfsburg from a spot in Europe right now.

But Hannover 96 also has American angles as well that make it worth watching. For one, Bobby Wood could possible return to the team after missing the past few weeks. Also, Hannover’s U.S. U-20 duo of Sebastian Soto and Chris Gloster might get promoted to the club’s first team in the final weeks as the club coasts to relegation.

But also, there was news that U.S. national team and Hannover club legend Steve Cherundolo wants to rejoin the club in come coaching or front-office capacity to help it return to Bundesliga as soon as possible.