A look at the eight minnows who complete the 2019 U.S. Open Cup field 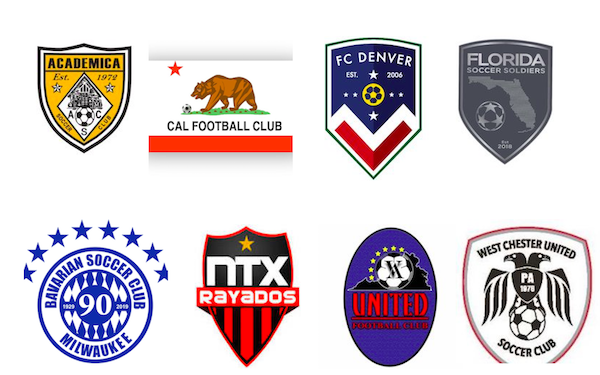 Eight teams from the Open Division -- seven that advanced through qualifying and one that qualified as the USASA's Amateur Cup champion -- complete the field for the 2019 Open Cup, which begins May 7-8.

The six winners in the final round of qualifying included Cal FC and NTX Rayados, which both have a history of success in the tournament.

Two of the winners, Academica SC and Virginia United, rallied late in overtime to equalize and then advanced via shootouts, while a third team, FC Denver, won after trailing 3-0 late in the first half.

Academica SC (LIGA NorCal). Academica came back from two goals down to tie Portland's IPS/Marathon Taverna on goals by Brennen Canfield in the 90th minute and Manuel Villegas in the fifth minute of stoppage time, then needed to come back again in the second overtime period, getting a goal by Gerardo Cazares in the fourth minute of stoppage time to send the game to penalty kicks, where it won, 3-1. Founded in 1972 by Portuguese immigrants in the town of Turlock in California's Central Valley, Academica SC will be the second oldest team in the Open Cup. It played in various Northern California amateur leagues before moving its first team from LIGA Norcal to the NPSL in 2017.

Cal FC (UPSL). Cal FC, one of the Open Cup's Cinderella stories of the last decade, is back, having beaten the Santa Ana Winds, 4-1, in the fourth round of qualifying. Eric Wynalda was the coach when Cal FC reached the 2012 quarterfinals thanks to a win over MLS's Portland Timbers. Cal FC's current coach is Keith Costigan, the Fox Sports and Seattle Sounders broadcaster. Players from the Wynalda era include Richard Menjivar and Danny Barrera, who both had assists in Sunday's win over the Winds. Cal FC is slated to enter NPSL's new Founders Cup in August.

FC Denver (Colorado Premier League). FC Denver rallied from 3-0 down after 44 minutes to beat Southwest FC, 4-3, in El Paso, Texas, and return to the Open Cup. Cesar Castillo, who played at Cerritos College, UC Santa Barbara and Fort Lewis, was the hero with the overtime winner. This marks the second year in a row FC Denver has reached the Open Cup. In 2018, Castillo's hat trick was the difference as FC Denver beat Colorado Premier League rival Azteca FC in its Open Cup debut match.

Florida Soccer Soldiers (UPSL). The Florida Soccer Soldiers swept three UPSL rivals from the South Florida area before advancing via forfeit when Orlando's America SC dropped out of the UPSL less than a year after joining the league. The Soldiers were formed in February 2018 and are based out of North Miami Beach. Players to watch include 19-year-old Argentine defender Valentin Sabella, a UPSL Best XI pick for the fall 2018 season, and former Columbia star Will Stamatis, the son of former Hermann Trophy winner Jim Stamatis.

Milwaukee Bavarians (UPSL). The Bavarians, founded in 1929, are the oldest team playing in the 2019 Open Cup. They qualified by winning the 2018 Amateur Cup, whose champion was awarded an automatic berth in the first round for the first time. They followed up their Amateur Cup title by winning the UPSL spring championship, becoming first team east of Nevada to win an UPSL title. The Bavarians won the first of five Amateur Cup titles in 1976 under player-coach Bob Gansler and then three in a row in 2001-03 and captured the USASA's Werner Fricker Open Cup title in 2003 and 2009.

NTX Rayados (North Texas Premier Soccer Association).  North Texas qualified for the Open Cup for an unprecedented eighth straight year when it crushed FC Marista from Missouri, 5-0, in the fourth round. It had survived an 11-round shootout to beat Motagua of New Orleans in the third qualifying. It reached the fourth round in 2018, the farthest it advanced in seven years. The club was founded in 2011 by players from local JC power Richland College and plays in the top tier of the North Texas Premier Soccer Association.

Virginia United (Woodbridge Soccer League). Virginia United is the first team from the Asocicacion Nacional Futbol en USA -- which was granted U.S. Soccer membership in February -- to qualify. It needed penalty kicks to beat World Class Premier Elite in the fourth round after getting a late goal in overtime to send the game to a shootout. The win was the third straight over a team from the Maryland Major Soccer League, one of the top state leagues in the country. In the third round, Virginia United upset Baltimore's Christos FC, 2-1, on a pair of goals by Mauricio Martinez. American-born Bernardo Majano, who plays internationally for El Salvador, scored both goals against World Class Premier Elite on Sunday.

West Chester Predators (USLPA). The Predators knocked off a pair of former champions -- four-time winner Ukrainian Nationals and three-time winner New York Pancyprian Freedoms -- by 3-0 scores on the road to reach fourth round of qualifying where they won at Safira FC by the same score. Founded in 1976, West Chester United is the third oldest team left in the 2019 Open Cup. It enters teams in the NPSL, new Northeast Elite Soccer League and United Soccer League of Pennsylvania.