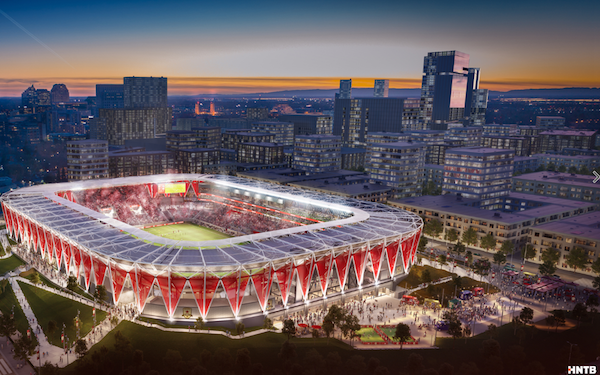 With MLS's board of governors slated to meet next week, the Sacramento city council backed the city's expansion bid by voting unanimously on Tuesday night in favor of a new term sheet offering a package of $33 million to Sac Soccer and Entertainment Holdings, which proposes to build a soccer stadium at a cost of more than $250 million in the Railyards area.

The public support comes in the form of ...

-- Rebates to the MLS group for infrastructure work done around the stadium -- streets, walkways, sewer system and a light rail station;
-- Waivers of  permit fees and tax rebates; and
-- Funds for traffic control and policing around the stadium during soccer matches.

The city also agreed to allow the proposed MLS team to install six digital billboards around the city.

Sac Soccer and Entertainment Holdings would buy 14 acres of land at the Railyards from a private developer for the stadium and 17 more acres for an entertainment, retail and office development that would push its investment in the project to $1 billion.

As part of the term sheet, it agreed to build a training facility for the first team and youth academy within the city limits.

The value of the community benefits the team agreed to provide to the community for such things as tickets, clinics and volunteer hours was estimated at $22 million over the next 35 years.