Ajax knows how to push boundaries 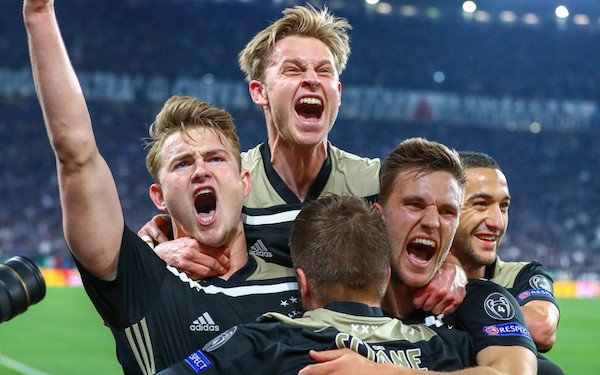 Ajax did it again.

After Real Madrid, the Amsterdamers came from behind to beat Juventus on the road and advanced to the UEFA Champions League semifinals against the Manchester City-Tottenham winner with a 2-1 victory in Turin (3-2 on aggregate).

And once again, there was little doubt who was the better team. Ajax should have scored four or five goals against Juventus, Serie A's runaway leader with a 17-point lead over Napoli with six games to play.

Ajax put on a clinic with its ability to spread the field and link up on the counterattack. The winning goal, though, came off a set piece in the 67th minute when 19-year-old captain Matthijs de Ligt rose above two Juve defenders to score on a powerful header.

"It's a result that is very important for Dutch football," he said. "We are on the way back, the signs are there. We have incredible talents and for our nation, it will get better and better."

The only thing ten Hag was disappointed about was that Ajax didn't put the game away after it took the lead.

“In the second half," he said, "we had three, four clearcut chances. I think we should have put the game to bed much faster. But I am happy and proud of my team.”

Frenkie de Jong, the 21-year-old midfielder headed to Barcelona next season, and de Ligt are the big names on Ajax, but they are only two players in Europe's most exciting young team.

The challenge will be to keep the team together -- or rebuild it after it is broken up. Monaco was in a similar situation two years ago. Its brilliant team led by 18-year-old Kylian Mbappe reached the semifinals of the 2017 Champions League, but players were systematically sold over the next two summers, leaving it with a shadow of its former self and mired in 16th place in Ligue 1 after an early relegation scare.

In the meantime, Ten Hag can only relish what he described as the enjoyment of this season's run that began in July when Ajax began qualifying that extended over three rounds.

“This team grows and grows," ten Hag said. "We know how to push boundaries every time. And with Tottenham or Manchester City there will be another challenge. We look forward to it."