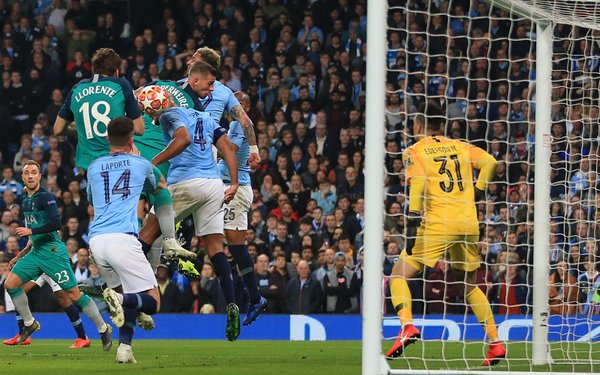 From beginning to end, Wednesday's Manchester City-Tottenham game in the second leg of the UEFA Champions League quarterfinals was one of the craziest games ever played in Europe.

It began with four goals in the opening 11 minutes, a fifth after 21 minutes, and it wasn't decided until deep into stoppage time when Manchester City scored what it thought to be the winning goal, only for it to be called off by VAR.

When the game was over, Manchester City was victorious, 4-3, but Tottenham advanced, its three away goals serving as the tiebreaker with the series tied, 4-4.

With the victory, Spurs qualified for the semifinals of the Champions League for the first time, and City's dubious record was intact. It's faced English opposition six times in Europe and lost all six times.

Given the resources available from Sheikh Mansour bin Zayed of Abu Dhabi, one of the United Arab Emirates, the elimination will be a huge setback for Manchester City even if it is still in contention for three major trophies after lifting the League Cup, reaching the FA Cup final and contending with Liverpool for the Premier League lead.

The exit is a huge blow for Manchester City manager Pep Guardiola, who has been in charge for three seasons and yet to taken City past the quarterfinals and who has not won the Champions League since 2011 when he coached Barcelona.

Wednesday's game turned on two late calls -- the decision not to overrule Fernando Llorente’s goal in the 73rd minute for a handball and the decision to overturn Raheem Sterling’s stoppage-time goal for offside on Sergio Aguero after Spurs star Christian Eriksen gave the ball away in his team's half but the ball deflected off City's Bernardo Silva to Aguero.

Guardiola described the ending as "cruel" but said he had no problem with VAR, which has yet to be introduced in the Premier League and is being used for the first time in the knockout stage of the Champions League.

“I support VAR," he said before saying the Llorente decision was the harder one to swallow.

"It’s just to see the goal from Llorente is handball," he said. "From one angle looks like handball, from the angle the referee saw it doesn’t."