Immigrants, Latinos and our soccer landscape (1)

One of the most interesting and challenging issues of our soccer landscape is the question, Whether our system is leaving any immigrant and Latino players, coaches and referees out? If so, why? If we know the reasons, might we find solutions to this issue?

The question should be: Are we reaching to the immigrant and Latino communities for players, coaches and referees for our NTs, colleges and Pro teams?

First of all, we must distinguish between immigrants and Latinos. Immigrants are those who were born in a foreign country and now legally reside in the USA as a naturalized citizen or permanent resident like myself. Some of the immigrants might also be Latinos. Latinos are those who have immigrated from the south of the border at some time in the past. The definition of Hispanic or Latino Origin used in the 2010 census:  “Hispanic or Latino” refers to a person of Cuban, Mexican, Puerto Rican, South or Central American, or other Spanish culture or origin regardless of race. What is common in both groups is the fact that a majority of them grew up in a soccer culture whether it be in this country or elsewhere.

In order to answer whether our system is reaching out to immigrant and Latino communities for developing players, coaches and referees you need both objective and subjective data. The amount of objective data -- as we will see later is very restricted -- and the subjective data is restricted to my experience in South Texas, where the demography is an excellent source for both immigrants and Latinos. We will concentrate only on the player side since the objective demographic data on the coaching and refereeing side is even more restricted.

The Pew Research Center’s study shows that immigrant share of U.S. population nears historic high of 13.5%. That means in 2016 13.5% of our population was born on foreign soil. 23.7% of them were unauthorized immigrants but still that leaves us with 10.03% of our population to be legal immigrants. “Mexico is the top origin country of the U.S. immigrant population. In 2016, 11.6 million immigrants living in the U.S. were from Mexico, accounting for 26% of all U.S. immigrants. The next largest origin groups were those from China (6%), India (6%), the Philippines (4%) and El Salvador (3%). In terms of regions, about two-thirds of immigrants lived in the West (34%) and South (33%). Roughly one-fifth lived in the Northeast (21%) and 11% were in the Midwest. In 2016, most immigrants lived in just 20 major metropolitan areas.” 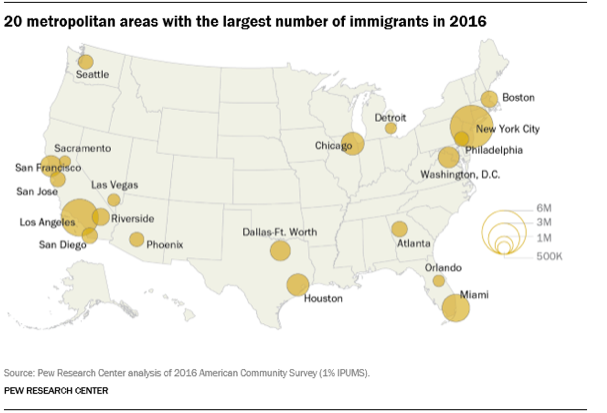 Pew Center’s research gives us an indication of the quantitative importance of the immigrants in our society, their origins and their localities in the country. If you include into this data the number kids born on USA soil from legal immigrants parents the number for potential soccer players will increase. According to Pew Research Center (2016): “Today, 34.4% of Latinos are immigrants, down from a peak of 40.1% in 2000. And the share that is U.S. born has grown to 65.6% in 2015, up from 59.9% in 2000. “

Five mostly Latino populated states are: (According to Pew Study 2016)

California and Texas are the two most populated States in the USA.

The states with the highest five Hispanic population, both in terms of overall numbers and in regards to proportion of population, are listed below in– Hispanic Population by U.S. state. Source: U.S. Census Bureau 2015. 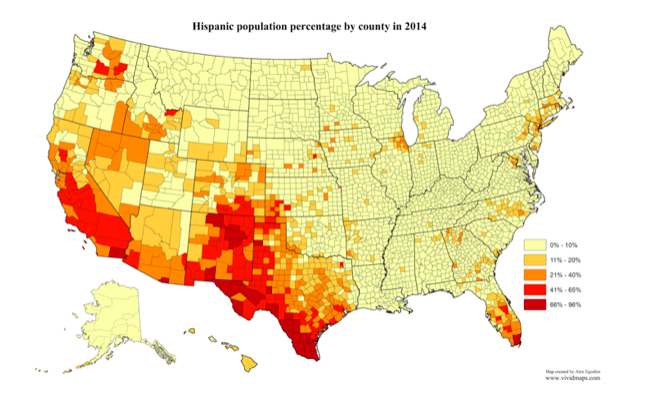 Looking at the above map of 2014 it is obvious that the Latino population is condensed around the border area with Mexico and the tip of the Florida peninsula.

The set of immigrants and Latinos are mutually inclusive so we can never know exactly the number of immigrant or Latino kids who can play soccer. These players would potentially be able to play for national teams or go to college with a soccer scholarship or play the game professionally as long as they are in the U.S. Soccer system. But the number is definitely around 15 million-20 million.  We are talking about 15 million-20 million kids who most probably grew up in a soccer-immersed environment – like the fictional character Ali of one of my previous articles – and would have a better affiliation with soccer culture.

This is a short overview of our country’s demography on immigrants and Latinos.

The objective data on soccer players is very restricted, as we said earlier. Until now, we could only guess the number of registered players in the USA due to living in the most litigious society and the most decentralized government style on the planet. Thanks to FIFA Connect project and to the great efforts of U.S. Soccer, we will soon be able to tell the number of U.S. Soccer registered soccer players. Unfortunately, this database will give us the gender and age distribution of the players but not the racial distribution. We can only guess whether a player is the child of a Latino by looking at his/her last name.