FC Dallas coach Luchi Gonzalez: 'It's a privilege to work with our players and staff' 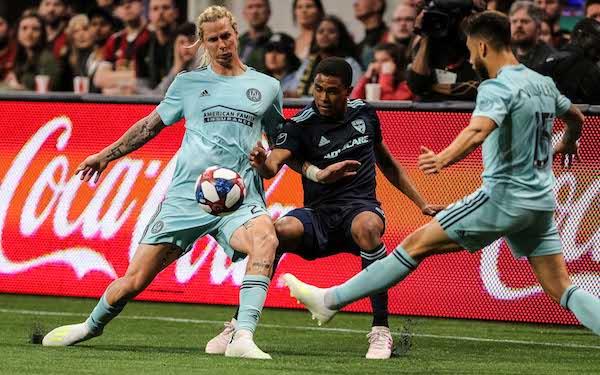 Atlanta United has been struggling with a 1-3-2 record now through six games, but it had what new coach Frank de Boer said was its best performance of the season. It had more than 70 percent of possession and still lost, suffering its first defeat at home in almost 11 months.

"It’s a privilege to work with our players and staff," said Gonzalez, "and to have a game like we did, in terms of a result."

Here's what FC Dallas did right ...

1. Michael Barrios was again outstanding. Jesus Ferreira scored in the second consecutive game and has goals in the last three wins, and Honduran Bryan Alvarez came off the bench to add to the lead in the 84th minute. Both goals were set up by Colombian winger Michael Barrios.

“Mikey is a very dynamic player with speed and has great movements in behind," Gonzalez said. "If [Atlanta left back] Brek [Shea] was going to commit forward and they lost possession, it was a space that we felt we could attack. It’s one option, and it ended up helping us on the second goal."

2. Youth prevailed again. Even with a change in formation that resulted in one midfielder being sacrificed, FC Dallas won playing with three teens in the front five. Ferreira, 18, and Barrios were joined in the attack by 19-year-old Paxton Pomykal.

Edwin Cerrillo, 18, started his fifth straight game and picked up his first assist, triggering the counterattack that led to Alvarez's goal with a long ball into space to Barrios.

Ferreira, Pomykal and Cerrillo were among five Homegrown Players who started along with goalkeeper Jesse Gonzalez, 23, and right back Reggie Cannon, 20.

3. Formation change stifled Atlanta attack. After going with a 4-3-3 formation in the first six games, Luchi Gonzalez switched things up, playing a 3-4-1-2, giving Brazilian Bressan his first start as a third center back and employing Ryan Hollingshead and Cannon as wing backs.

“If you saw, they were breaking their lines to the opposition's outside backs," said Gonzalez, "so we were encouraging Ryan and Reggie to put pressure on the opponent and then we felt we were defensively sound with three occupying Josef Martinez’s space.

4. Late-game management has improved. FC Dallas has now taken the lead in its last five games. The problem has been sustaining its effort in the second half. Atlanta dominated the game, finishing with 22 shots, but Gonzalez said he saw improvement in how FC Dallas closed out the game, getting a second goal from Acosta before Martinez converted a late penalty kick.

“Closing a game is difficult in this league, in any venue, let alone this one," said Gonzalez. "We knew they were going to commit numbers there at the end. We talked about it during the week, if we have the opportunity to have an advantage and how we can close a game better that we need to continue to get pressure on the ball, continue to counter and open spaces."

mls
10 comments about "FC Dallas coach Luchi Gonzalez: 'It's a privilege to work with our players and staff'".
Read more comments >
Next story loading