Fans embrace teams at many levels, as demonstrated by a Dublin derby

Like Irish soccer itself, Dalymount Park is so close to the heart of the action and yet so distant. 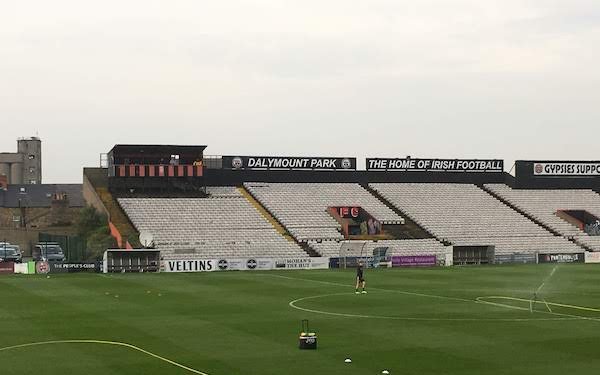 Dublin attractions such as the Temple Bar, the Ha’Penny Bridge and Trinity College are within two miles of the stadium. It’s just over a mile away from the 82,300-capacity Croke Park, which is almost exclusively used by the Gaelic Athletic Association for its oddball domestic sports of Gaelic football and hurling, nearly casting a literal shadow over old Dalymount.

In years gone by, Dalymount hosted Irish national team games and concerts. Lovingly painted tributes to Thin Lizzy and Bob Marley adorn one wall today. More than 40,000 people filled the venue at times in the past.

Today, the park would strain to hold 4,000. Terraces are empty except for the occasional clever sign. An entire stand is closed, though you can see a camera crew operating near the top.

Small stadiums hold a special place in European folklore. They may be tucked away in a neighborhood -- we actually had trouble finding the stadium entrance and wound up walking all the way around the blocks surrounding it, with the floodlight towers almost taunting us as we tried to work our way in.

But the problem here is that the venue used to be so much more than it is today. And the top level of the club play is so much smaller than the other sports leagues in Ireland.

The Irish men’s national teams in soccer and rugby play their home dates at the 51,700-seat Aviva Stadium, which opened less than 10 years ago and also hosts some of the more important home dates for Leinster Rugby. The women’s national soccer team plays in Tallaght Stadium, also home to Shamrock Rovers.

Dalymount Park has one tenant today: Bohemian FC, one of the stronger clubs in Ireland.

And the supporters and club embrace it. A clever sign reads, “Keep off the pitch! The club can’t afford fines and neither can you.” Lively murals greet spectators as they head toward the gate. A couple of the loudest supporters turn up early to shout, chant and clap at no one in particular, a cue for those of us traveling with families to pick up and move to the other side of the general-admission stand. Unfortunately, they also smoke.

Some of the amenities aren’t bad. A friendly bar underneath the stand lets supporters have a nice beer while keeping tabs on the action on TV. Two small concessions vendors keep the kids happy with popcorn and soda. Visitors can also buy Bohemians merchandise in a cramped room.

Thank goodness for the in-stadium merchandise, because you can’t find any at Intersport Elverys, a posh sporting-goods shop just a couple of miles away. The shop stocks some rugby jerseys and what appears to be a football/hurling jersey from every county. They stocked a couple of soccer jerseys, but not Bohemians. And not University College Dublin, the visiting team on the night we were able to catch a game. 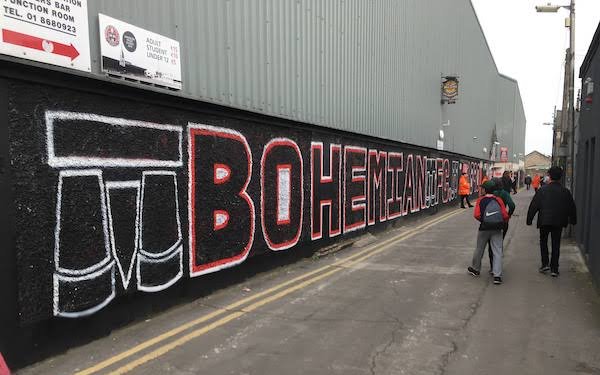 The game is uniquely Irish. Bohemians’ roster page specifies not only that most of their players are from Dublin but also specifies the particular neighborhood. UCD does indeed field students.

It’s entertaining in an offbeat way. No one would confuse the teams here with any mid-major pro league in Europe, but the players show glimpses of skill. Neither team plays long-ball. Neither team sits back and bunkers, hoping for a counterattack. UCD, recently promoted from the First Division to the top tier, turned up here as a definitive underdog but pressed the action early.

There’s also something entertaining about seeing play ranging from the sublime (Bohemians’ second goal was a masterclass of passing in the attacking third) to the ridiculous (goalkeeper distribution is not a strong suit here). When a Manchester City or Liverpool player approaches the ball, you can bet on the next touch being competent or even fantastic. When a player in this Dublin derby approaches the ball, you have no idea where it’s going.

The club is making a strong effort to build up, literally. The main stand has been selling out recently, giving the club reason to open the other functioning stand, a few rows of seats behind one goal. Attendance is up a staggering 44 percent.

A proposed redevelopment of the stadium has been a political football for a while. A video of the project seems like an endeavor from another planet. Even if it’s done, capacity will be a humble 6,000. And Bohemians will be sharing the ground with Shelbourne, which will move roughly 1.5 miles from the neighborhood next door.

Despite UCD’s early pressure, the night belonged to Bohemians, which took a 3-0 win. We missed the third goal as we tried to get back to our hotel via Dublin’s comprehensive but confounding bus system.

(Dublin really is a wonderful place to visit, and if your stops are connected by a single bus line, it’s rather easy to get around. Making connections make sense if a more difficult task.)

What lessons can we Americans draw from all this? Probably not much. Ireland has a few things in common with the United States, particularly the presence of a domestic “football” with a substantial fan base. (“Three days ago, just 54,716 turned up,” lamented one report on the All-Ireland football semifinals.) The domestic soccer league plays in the summer, which gives it a window in which it’s not competing with leagues from England and elsewhere for TV viewers. (Irish games are typically on Friday nights, smartly avoiding EPL days.)

But perhaps the biggest inspiration that can be drawn is the way the club makes the most of what it has. The supporters didn’t seem to care that they’re watching what would be lower-division soccer in most countries, nor did they care that the club can’t really move up to a higher level aside from the occasional brief run in qualification for the Champions League or Europa League.

So aside from the smoking, a Bohemians supporter may be right at home alongside a supporter for an elite amateur club here. And that kinship is worth celebrating.