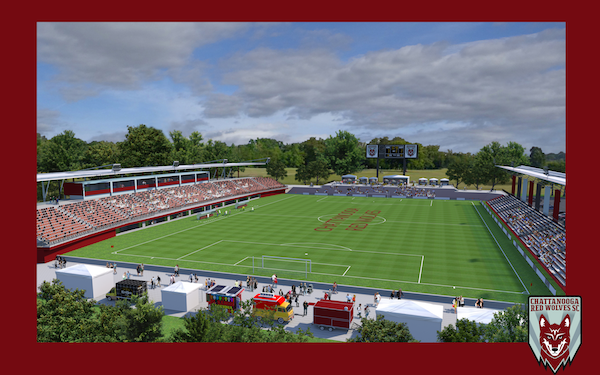 Chattanooga is ground zero for the battle between the USL and NPSL.

Founded in 2009, Chattanooga FC is one of the most successful teams in the NPSL and a founding member of the Founders Cup, which will launch in August.

The Chattanooga Red Wolves are in their first season in the new USL League One.

Chattanooga FC, which plays at the University of Tennessee at Chattanooga's Finley Stadium, is offering public ownership shares through an federal online fundraising initiative. It's drawn international attention and raised more than $679,000 in $125 increments.

The Red Wolves, who are playing Chattanooga Christian School's David Stanton Field, are owned by Utah builder Bob Martino and announced plans on Thursday for a $125 million development that will include a 5,500-seat soccer-specific stadium in the town of East Ridge, bordering Chattanooga.

“The Chattanooga Red Wolves Soccer Club was founded with the ultimate goal of strengthening our community through soccer," said Martino, "and this investment doubles down on my commitment to the region, our players and the soccer community. People will be able to live, dine and play here, and experiencing professional soccer in a unique setting is at the heart of this development.”

The stadium, which will be an anchor for the development, will also host the team's offices, locker rooms and work areas. The Red Wolves are also putting $1.25 million-$2 million of improvements into a training complex in nearby Camp Jordan, and a trail running under I-75 will connect the two areas.

The larger development will include 400 apartment and condominium units, 375 hotel rooms, 475,000 square feet of commercial space and a network of walking and nature trails. Martino said the location on I-75 is perfect as a midway point for commuters from the north heading to Florida to stop at.

“Families and our fans will have the unique opportunity to enjoy a whole day of fun around a match or a weekend-long celebration of soccer,” said Sean McDaniel, Chattanooga Red Wolves' president and general manager who previously served as the Chattanooga FC general manager.