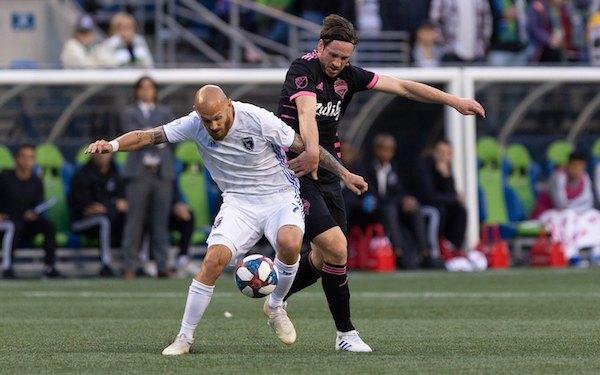 The surprise of the 2019 MLS season may be the San Jose Earthquakes.

Home wins over Portland (3-0) and Sporting Kansas City (4-1) were sandwiched around a 2-1 loss to Houston, which has lost just once all season. But the result that got everyone's attention was the Quakes' 2-2 tie at Seattle on Wednesday. The draw snapped a seven-game winning streak for the Sounders at CenturyLink Field.

But the result didn't tell the whole story. Putting the first 10 minutes aside, the Quakes basically ran the Sounders off the field for much of the first hour, like Sporting KC manager Peter Vermes freely admitted happened to his team on Saturday night at Avaya Stadium.

Much of the Quakes' recent success -- as well as their early troubles in 2019 -- is due to the system adopted by their first-year coach, Matias Almeyda. He likes to man-mark all over the field and overwhelm the opposition with pressure. When it works, the chances come in bunches.

In the 34th minute, Magnus Eriksson stole the ball near midfield and passed it to Shea Salinas, who raced in from the left wing and beat Kelvin Leerdam before putting a left-footed shot past Seattle keeper Stefan Frei. To start the second half, Cristian Espinoza and Jackson Yueill hit the post before Salinas added a second goal in the 54th minute after Espinoza won the ball about 30 yards out and sent a low cross to him at the far post.

“I’ve been studying them for three months now," said Almeyda, "and this was a demonstration of their character, especially keeping in mind that the first 10 minutes we were playing like we were asleep. Then for a while we were in control of the game against a difficult team. It was a spectacle.”

The Sounders were coming off a 4-1 loss at LAFC on Sunday afternoon and with a rematch against LAFC set for this Sunday, looked like they didn't know what hit them.

“It was wild," said Seattle midfielder Harry Shipp. "I’ve never played a team like that and it’s part of the reason why they’re decently successful -- the novelty of it. It takes thinking. It takes understanding how to drag guys out of position. It’s totally different than a normal game you play. It took us a little bit to adjust to it and unfortunately we weren’t able to adjust to it in time enough to get all three points."

The problem for the Quakes is that when its all-out press breaks down, as it did early in the season -- when they gave up 14 goals in their first four games -- chances come easily to the opponent. When the Sounders figured out what was going on, they scored two quick goals from Leerdam and Shipp in the 65th and 67th minutes. After that, both teams had chances to go ahead but were denied by great goalkeeping.

“I felt like we were playing a bit of their style as well," said Seattle's Cristian Roldan, "just because you end up -- you lose the ball defensively and you end up being man to man. It was a bit of a chaotic game. They make things difficult. They make the game a little different."

Even if the Quakes let Seattle back into the game, Almeyda liked how his players kept looking for the victory.

"They’re really putting their souls in there, which is what I ask of them," he said. "This team has not given up looking for victories. Surely, playing this way, we’ll have more of a chance of winning than things going badly.”