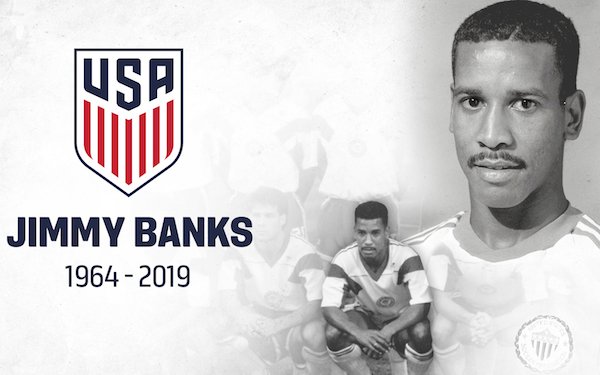 Jimmy Banks, who passed away on Friday at the age of 54 after a battle with pancreatic cancer, was a groundbreaker.

Desmond Armstrong and Banks became the first African-Americans to play for the USA in the World Cup when they started in the 1-0 loss to host Italy at the 1990 finals in Rome.

At 25, Banks was the oldest starter on the field for the USA against Italy. He was not a full-time starter but he had been a regular on the national team, earning the first of 36 caps in a 0-0 tie with Canada in 1986.

Canada was headed to the 1986 World Cup, the USA wasn't, but it was the seminal match in the modern history of the U.S. national team program. The group of mostly collegians and recent college graduates was playing their first match under head coach Lothar Osiander at a pre-World Cup tournament played in Miami. The result of the second game was even more impressive, a 1-1 tie with Uruguay, another World Cup finalist. Eight players from that team went on to make the 1990 World Cup team, the first U.S. team to go to the finals in 40 years.

Banks' national team career ended in 1991, long before that of other members of the 1990 team like Tony Meola, Marcelo Balboa, Tab Ramos, John Harkes, Eric Wynalda and Paul Caligiuri, but his contributions to soccer did not end there.

Indeed, no national team player has ever contributed more to his hometown than Banks quietly did.

Banks' playing career in Milwaukee took him from a Salvation Army program near the city’s Westlawn Housing Projects to Custer High School to the Milwaukee Brewers, a German club, and then the Milwaukee Bavarians, the current U.S. Amateur Cup champions, where he met Bob Gansler, who brought him to the Wisconsin-Milwaukee and coached him on the 1990 World Cup team.

Banks, who developed through the ODP program and was Wisconsin's first high school All-American, also attended UW-Parkside in 1983, making him the first and only NAIA player to represent the USA at the World Cup. He was selected No. 1 by the Major Indoor Soccer League’s Kansas City Comets, but he played his entire indoor career for his hometown Milwaukee Wave in the AISA (later NPSL).

Banks, who held a USSF-A coaching license and had a degree in education from UWM, gave his life back to developing urban youth soccer programs in Milwaukee. He started the Jimmy Banks Inner City Soccer League run by the Boys & Girls Clubs of Greater Milwaukee and the Milwaukee Simbas. For the last 20 years, Banks was the head coach of the men’s team at the Milwaukee School of Engineering in 1999, winning 198 games and leading the Raiders two NCAA Division III Tournament appearances and two NACC conference championships.

Banks, who was also the director of coaching of the Milwaukee Kickers, credited the coaching he received from Bob Speilmann, Jerry Panek, Keith Tozer and Gansler, among others, for his success as a coach. He was an inducted member of UW-Milwaukee Athletics, Custer High School and Wisconsin Soccer Association’s Halls of Fame.

Banks always downplayed his soccer accomplishment, once describing to a reporter playing in the 1990 World Cup as simply a “good experience," but he was most proud of his soccer-playing sons whose pictures adorned his office wall.

Jimmy Banks is survived by his three sons, Demetrius, J.C. and Jordan.