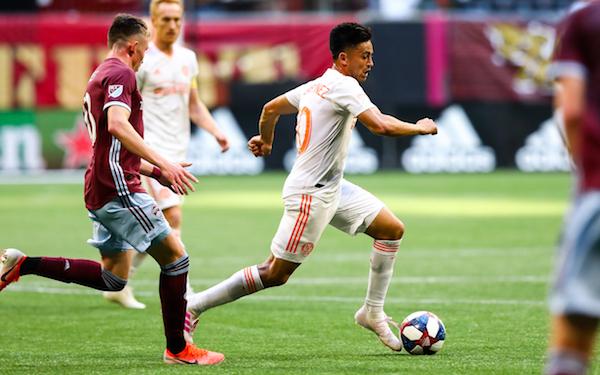 Atlanta United picked up its second win of the season with a 1-0 win over the Colorado Rapids, but there were few positives to take away from the game other than the three points, which moved the Five Stripes out of the Eastern Conference basement into 10th place.

The win was Atlanta United's first in four games at Mercedes-Benz Stadium this season and it came against the worst team in MLS. The winless Rapids allowed 17 goals in their previous five games, the only goal the allowed on Saturday came in the 74th minute when Julian Gressel beat two defenders to the near post, where he poked his right foot at the ball and it glanced off the left post and into the net.

The Rapids held on until then by parking the bus, or as Atlanta United coach Frank de Boer insisted, by parking two buses in front of their goal.

“You always need two teams to try and play football," said de Boer, "but tonight there was only one. We tried to win the game. It’s hard in international football and here when team’s play like this. You have to have a fantastic day, even the bigger teams in Europe have problems against teams that play this kind of system. They park two buses in front of their own goal."

Whether the Rapids parked one bus or two buses, it ignores the reality that there is something seriously wrong with Atlanta United. For the Five Stripes' first two seasons, Mercedes-Benz Stadium and before it Bobby Dodd Stadium rocked. Atlanta United was the first MLS team to score 70 or more goals in back-to-back seasons in 2017 and 2018,

After it became clear Argentine coach Tata Martino wouldn't be returning, Atlanta United president Darren Eales said the ideal candidate to replace Martino would be someone who could implement the Five Stripes' attacking style.  Since de Boer has taken charge, Atlanta United has become tentative and struggled in most games to break down opponents, and it's last in MLS with just six goals scored.

The problems have been personified by Pity Martinez's slow start. He was named the 2018 Rey de America after leading River Plate to the Copa Libertadores title, but he doesn't have a goal or assist in six MLS appearances. An injury picked up while playing for Argentina in March has slowed Martinez down. Saturday's game was his first start in six weeks, and he was not a happy camper when de Boer subbed him in the 72nd minute and the match was still scoreless.

Martinez was signed to replace Miguel Almiron, who was transferred to Newcastle United, but he has failed to link up with 2018 MLS MVP Josef Martinez like Almiron did with the Venezuelan.

"Maybe it wasn’t his best game," said de Boer, "but it doesn’t matter. It was his first start in a long time. He has to get used to the surface and style of play in MLS. He’s our No. 10 normally, and we want him close to Josef Martinez. They have a good combination, and hopefully in the future, we will see a lot more of that combination play."