Colorado's Anthony Hudson: 'We are fighting down the bottom with a bottom group of players' 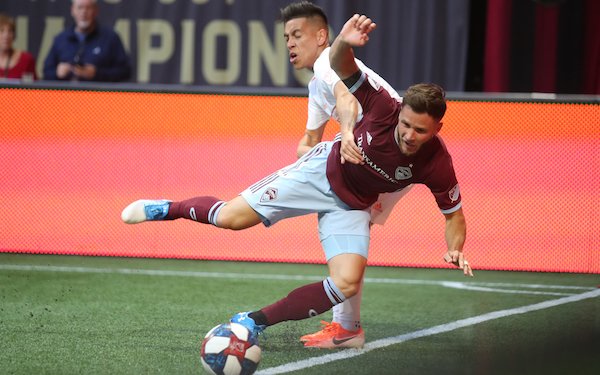 In the last four seasons, the Colorado Rapids were last or next to last in the Western Conference three times.

"If this was a promotion-and-relegation league," second-year head coach Anthony Hudson said after Saturday's 1-0 loss to Atlanta United, "we'd have been relegated by now."

Saturday's result was frustrating for Hudson because the Rapids had held Atlanta United, the defending MLS champion, off the scoreboard until Julian Gressel's goal in the 74th minute and limited the Five Stripes to three shots on target

“We come to a place where a team full of superstars and big-money players and massive, massive gap in class," he said, "and we’ve set up a different way. I think we’re a little unfortunate not to come away with at least a point in the game. I’ve just said to the players in there that I think they’re incredibly unlucky. I think the effort they put in today was big considering the position we’re in to come here and to really limit them.”

Owner Stan Kroenke purchased the Rapids from AEG in 2003 at the time when MLS, down to 10 teams, had only three owners.  Dick's Sporting Goods Park opened in 2007, and the Rapids won MLS Cup in 2010, but since then they fallen far behind other teams in terms of their spending.

Their only Designated Player is goalkeeper Tim Howard, who will retire at the end of the season. They made four TAM signings in 2018 -- Jack Price, Tommy Smith and Danny Wilson and Yannick Boli -- but their level was not up to the level of TAM signings made by other teams.

"Today was just another example of the real gulf in class," he said. "I think every single game we’re playing against teams and their DPs are making a difference. People think we are on the same level, we’re not."

Hudson said the Rapids are still in the rebuilding -- every starter on Saturday is in his first or second season with the Rapids.

“The only way it’s going to be a quick fix is if you wave a magic wand at it and throw lots of money at it," he said. "Clearly, we’re not doing that. I’ll go back to this: Every single game we go into, whether it’s Nani, whether it’s [Wayne] Rooney, whether it’s [Lucho] Acosta — every single week there are players in this league making a difference and the gap in quality is huge."

The Rapids have started to introduce young academy products, beginning with 17-year-old midfielder Cole Bassett at the end of 2018. Against Atlanta United, the backline included 19-year-old Sam Vines in his third MLS start and 16-year-old Sebastian Anderson in his MLS debut ("he was the least of my worries tonight," said Hudson).

"I think potentially we’re the only team with one DP, who’s in goal, and not two or three up front," Hudson added. "That’s going to take a bit of time to address that situation. We are fighting down the bottom with a bottom group of players and we have to find a way to pick up results whilst also being a team that tries to play a certain way. And we just have to find that balance.”

mls
6 comments about "Colorado's Anthony Hudson: 'We are fighting down the bottom with a bottom group of players'".
Read more comments >
Next story loading