MLS's primary transfer window closes on May 7, and most teams are done making moves until the summer. (The only possible transfer of note that might be concluded in the next week involves Portland and Brian Fernandez, Necaxa's Argentine striker.)

Two months is long enough to provide an initial evaluation of how teams fared in primary transfer window. Here's our MLS Best XI in terms how new players have improved teams or helped them remain competitive in face of offseason losses.

1. LA Galaxy. Dennis te Kloese is no stranger to MLS, having worked at Chivas USA and later overseeing it when he moved to Guadalajara, but the league has changed a lot since then. He didn't arrive as the Galaxy's new GM until mid-December, but he oversaw the reconstruction of the Galaxy, which missed the playoffs for the second year in a row but now has the best record in MLS, averaging 2.44 points per game.

The Galaxy isn't playing great, but then again, it's no longer giving away games with poor defending. That's a credit to the work of new coach Guillermo Barros Schelotto, but also the players te Kloese has brought in. Center back Diego Polenta, midfielder Joe Corona and winger Uriel Antuna weren't big-name signings, but they have provided stability.

Te Kloese has used just about every MLS player mechanism available, swinging two deals to acquire Giancarlo Gonzalez through the Allocation Process and getting 17-year-old Julian Araujo through waivers. Araujo, who just might end up being this year's top rookie, didn't have enough time in the Galaxy academy system to qualify as a Homegrown Player signing.

Te Kloese accomplished all this while dealing with the team's No. 1 priority: getting down to three Designated Players. The Galaxy ended up eating Giovani dos Santos' contract. The move was costly, but getting the contracts of dos Santos and Ola Kamara (sold to China's Shenzhen FC) off the books freed up lots of salary space to begin the rebuilding process.

2. Toronto FC. Toronto media were freaking out, predicting the end of TFC as they knew it when Sebastian Giovinco was allowed to leave for Al-Hilal in Saudi Arabia instead of signing a new contract. They obviously hadn't been following Alejandro Pozuelo in the Belgian Pro League. Why should they have?

Pozuelo is the early favorite for the MLS Newcomer of the Year award with four goals and five assists in five games since TFC negotiated his early exit from Genk, which is leading the Pro League. El Maestro's success is a big factor in TFC's 2019 turnaround and reason alone to put the Reds in second place in our Best XI rankings. 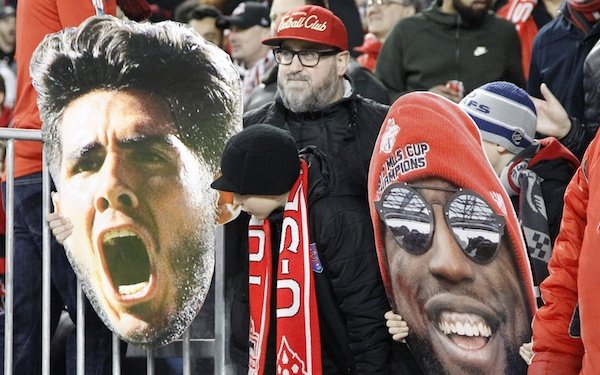 3. Minnesota United. The MNUFC front office had one mission in the offseason: get head coach Adrian Heath some defensive help, so the Loons would at least be competitive when they moved into their new home at Allianz Field. The results have been mixed, but shutouts against the Galaxy (0-0) and D.C. United (1-0) this past week suggest the moves are starting to pay off.

The top five Minnesota players in terms of minutes played are all first-year players brought in to stabilize the defense: goalkeeper Vito Mannone, right back Romain Metanire, center back Ike Opara and central midfielders Jan Gregus and Osvaldo Alonso. Metanire, the French-born Madagascar international, leads the Loons with four assists and has established himself as one of the best right backs in MLS.

4. Orlando City. For the second year in a row, the Lions blew up their roster in the offseason. Of the 23 returning teams, a league-high 57.9 percent of Orlando City's minutes have gone to first-year players.

In 2018, the Lions started 6-2-1, then collapsed, winning only two of their remaining 25 games. It's in the context of those 25 games that we view Orlando City's moves, so its 3-3-3 start -- good enough for sixth place in the Eastern Conference -- has been a surprise.

There were lots of doubts about the signing of 32-year-old Nani, but the Portuguese star has been the big reason for Orlando's success with five goals and four assists in nine games and goals in each of the last four games. But he isn't alone. Head coach James O'Connor has given starts to 12 different new players. 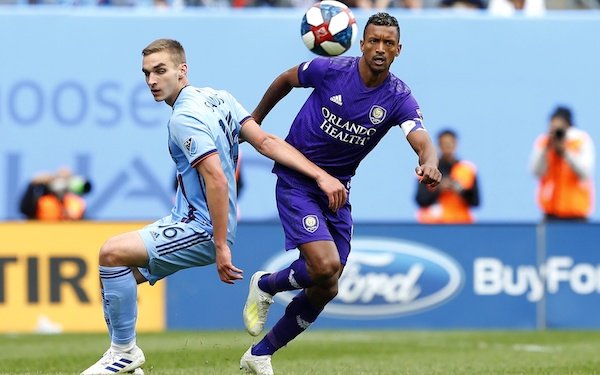 5. Houston. The Dynamo has benefited from a favorable MLS schedule -- five of its first seven games were at home -- but it's legitimate. At 5-1-1, Houston ranks third in MLS in terms of points per game (2.29). A big part of the Dynamo's success is due to the play of young Honduran star Alberth Elis, who is setting himself up for a big transfer move out of MLS, but some offseason moves brought stability.

Aljaz Struna and Maynor Figueroa are starting at center back and young Argentine Matias Vera has moved into midfield. Figueroa, 35, went unclaimed in the Re-Entry Draft after FC Dallas declined his option. He's given the Dynamo another veteran leader, to go along with fellow Honduran Oscar Boniek Garcia, in the young Houston locker room.

6. D.C. United. Following its move into Audi Field, United continued to ramp up its lineup with the acquisition of Argentines Lucas Rodriguez on a Designated Player contract from Estudiantes and Leo Jara on loan from Boca Juniors. Rodriguez already has golazos against Real Salt Lake and Colorado.

Homegrown Player signing Donovan Pines, a big part of Maryland's 2018 national championship team, has started the started three games at center back and was unlucky not to scored is first pro goal (called off on Video Review) on Sunday at Minnesota. 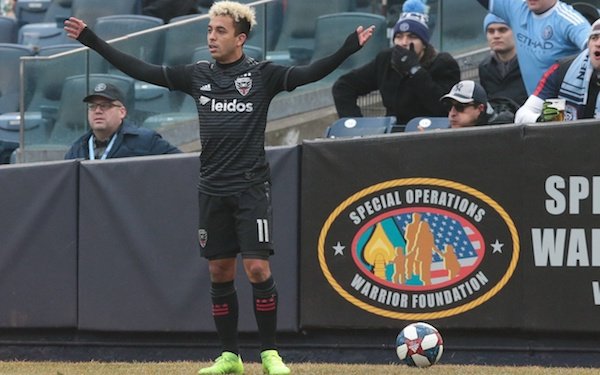 7. Philadelphia. Marco Fabian and Sergio Santos, the Union's two big offseason signings, have been injured, but Dutch-born Cape Verde international Jamiro Monteiro has been impressive since entering the starting lineup three games ago.

Where the Union continues to get a lot of mileage from is with its Homegrown signings. In his first season as a pro, Brenden Aaronson, 18, earned a starting job in the Union's third game, scored in his debut and has been a fixture in midfield since then.

Matt Freese left Harvard after two years to turn pro and was expected to spent the year at USL second team Bethlehem Steel. But with Andre Blake injured, he made his first MLS start at Vancouver and acquitted himself well in a 1-1 tie that left the Union in third place in the Eastern Conference.

8. New York City FC. Filling David Villa's shoes was always going to be an impossibility, but NYCFC wasn't shy in splashing out $8.5 million on Romanian Alexandru Mitrita and another $3 million or so on Brazilian Heber.

NYCFC began the season with six games without a win -- five ties and one loss -- but it finally got untracked when Heber had a goal and an assist and Mitrita had a goal in the 2-0 win at D.C. United. Heber followed that up with an assist in the 1-0 win over Chicago and the NYCFC goal in the 1-1 tie with Orlando City on Saturday afternoon.

If Mitrita and Heber can stay healthy, NYCFC should return to the playoffs for the fourth year in a row. 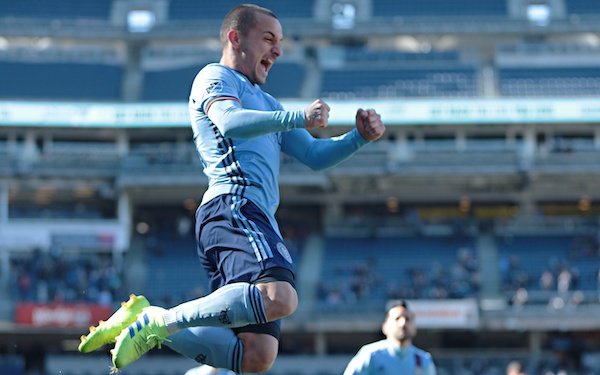 9. San Jose. A bunch of guaranteed contracts left the Earthquakes without much room to maneuver after their catastrophic 2018 season. But one of the most exciting new players in MLS has been 24-year-old Argentine Cristian Espinoza, on loan from Spain's Villarreal.

The Quakes are starting to find their way under new coach Matias Almeyda, and Martinez has been very dangerous in transition. He set up one goal in San Jose's eye-opening 2-2 tie at Seattle but also hit the post.

10. FC Dallas. FC Dallas is a team that depends on pushing academy players into the first team. Paxton Pomykal and Jesus Ferreira are finally getting chances, but the revelation has been 18-year-old midfielder Edwin Cerrillo, signed to a pro contract two weeks before the start of the season. Right now, Cerrillo is the leading candidate for MLS Rookie of the Year.

Brazilian defender Bressan and Honduran midfielder Bryan Acosta have only received spot duty but both made big contributions in the 2-1 win at Atlanta United.

11. Chicago. A trade brought C.J. Sapong over from Philadelphia late in preseason, and he already matched his entire production in 2018 with four goals in his first seven games. The Fire's success, though, will rest on the left foot of former Argentine international Nico Gaitan, acquired on a free transfer from Dalian Yifang in China.

The Fire looked like it was breaking out when Gaitan contributed two assists in the 4-1 win over Colorado, but it went silent in its next two games, losing 1-0 decisions to NYCFC and Montreal. Injuries have slowed down Polish winger Przemyslaw Frankowski, who played just 29 minutes in April.