High expectations for young Reyna and Co. in U-17 World Cup qualifying

The Concacaf U-17 Championship. If you watched in 2015, you got an early look at Christian Pulisic and Tyler Adams. The 2019 edition kicks off on Thursday for the USA and the odds are good it will again provide a preview of future U.S. stars.

The USA starts the tournament from which four of the 20 teams qualify for the 2019 U-17 World Cup on Thursday against Canada. Nine of the players on the USA's 20-player squad, coached by recently appointed Swiss Raphael Wicky, have already signed professional contracts. And that's not including playmaker Giovanni Reyna, who is expected to complete a move from the NYCFC academy to Borussia Dortmund in the near future.

“I think a player like him needs to be involved as much as possible in the game,” Wicky said of Reyna, whose father, Hall of Famer Claudio Reyna starred on the U.S. team that made history by beating Brazil, 1-0, at the 1989 U-17 World Cup. “He has a lot of talent. He makes the other players look better, he makes things easier for the other guys. So, I would like to have him as much as possible in the center of the field somehow.

“I don’t think the position where he plays when we have the ball is important. It’s more that he knows I want him in the center. So, he can start from the wing and come inside. He can be as a nine and drop down a little bit. He can start as a center midfielder, as an eight or a 10. So, there is a lot of different variations of him. I want to put him into positions where he touches the ball a lot. He has the potential, the quality to create chances.”

Reyna is part of a core of players, including MLS Homegrown signings Joe Scally (NYCFC), Alfonso Ocampo-Chavez, (who signed a Homegrown deal with the Seattle Sounders on Wednesday), and Gianluca Busio (who has scored three MLS goals for Sporting Kansas City this season), who have been playing together on U.S. youth teams for two years and finished runner-up to Mexico at the 2015 Concacaf U-15 Championship, coached by Dave Van den Bergh. A recent addition is Daniel Leyva, who signed a Homegrown contact with the Seattle Sounders in April. 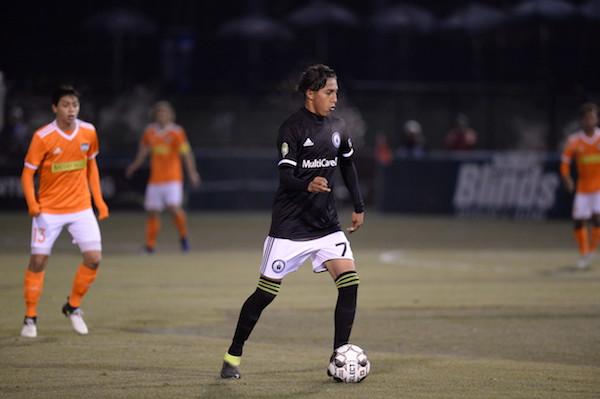 Leyva (pictured above) was the Golden Ball MVP and forward Ocampo-Chavez won the Golden Boot as their Seattle Sounders team won the U-17 Generation Adidas Cup in Dallas last month.

FURTHER READING: Raphael Wicky on the USA's U-17 World Cup quest, his playing career, and his coaching evolution


THE KNOCKOUT STAGE WILL DECIDE. Since the biennial U-17 World Cup was launched in 1985, the USA has qualified for the tournament each time but for 2013. Only Brazil, which will host the 2019 U-17 World Cup Sept. 17-Oct. 8, has matched that qualifying record.

The year's Concacaf U-17 Championship format sends the top three finishers of each of the four-team groups into a 16-team knockout stage, where four teams from the qualifying round await. The winner from the USA's Group F will face Guadeloupe in the round of 16.

The quarterfinal winners will qualify for this year's U-17 World Cup.

The most highly touted teams the USA could meet in the crucial quarterfinal are Costa Rica, Panama and Canada. (Group F's top finishers move into the same side of the bracket, with Group H teams, making a Canada-USA rematch possible.)

Joseph Scally
"Obviously in our plans to normally be the right defender. He’s very important for this team, has been in the recent games. His personality, his fighting spirit, his mentality to work for the team is really, really good and I’m really happy to have him."

Tayvon Gray
“Tayvon actually is a very interesting player for every coach because he covers three to four different positions, which helps me a lot when you have to choose a roster with limited numbers that you can pick. So, Tayvon can play center back, can play in the center midfield, he can play right and left fullback. That obviously gives me a lot of different options. He’s a real key player.”

Danny Leyva and Alfonso Ocampo-Chavez
“I was at GA Cup [for a week] and I saw almost all of their games. They played really, really well, and I’m convinced that they will be really important for our team. Alfonso is in great form, scoring a lot of goals at GA Cup as well as working hard for the team. Daniel just made an amazing experience being on the bench for the first team, which hopefully gives him even more reason to fly and help the team and perform well. Both of them are important for this team.”

Gianluca Busio
"So far, I know his personality [is] he needs to be part of a team. He alone, even if he has regular minutes, he's not going to make a team alone. It's about the team, and he's aware of that. I'm very happy to have him here."