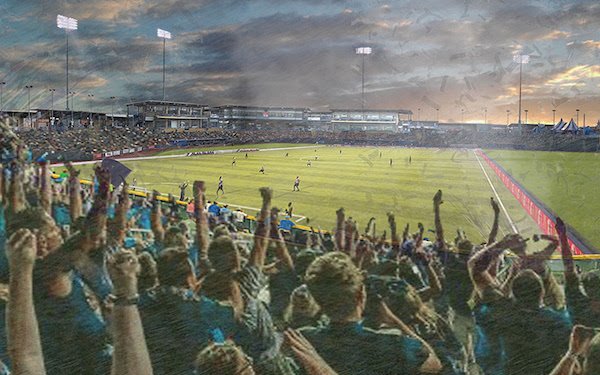 The first expansion franchise of the 2020 USL League One season was awarded to Alliance Omaha Soccer Holdings, which will make Omaha the first outdoor pro soccer market in Nebraska.

Omaha has been one of the best college soccer markets with Creighton and more recently Nebraska Omaha. (Former UNO head coach coach Jay Mims will coach the new USL team.) Omaha. Amateur Bugeaters FC, which played in Lincoln in 2018, plays its games in the new Great Plains Premier League at Creighton’s Morrison Stadium.

Baseball home. Omaha will join a growing number of USL teams that will play in minor-league baseball facilities. The team will play at Werner Park, home of the Omaha Storm Chasers of the Pacific Coast League since 2011. Gary Green, owner and CEO of Alliance Omaha Soccer, has been lobbying for a pro soccer team for two years.

“The Omaha soccer community has been yearning for a team to call their own and more importantly deserve a team to call their own,” said Green in a statement. “The USL’s vision to grow the beautiful game has shifted the dynamics of cities and communities across the country, creating an energy and passion that these communities have never seen before. Like other USL cities, Omaha metro and Sarpy County will experience this same shift.”

Martie Cordaro, the Storm Chasers president and general manager, will hold similar roles with the USL team. Matthew Homonoff, the 2015 PDL Executive of the Year at the Des Moines Menace, will be the chief operating officer.

County subsidies. Work will begin the fall to get Werner Park ready for soccer.  The stadium upgrades, initially funded by Sarpy County, will include additional locker rooms, field enhancements and offices for the new soccer staff. The cost is estimated at $2.2 million.