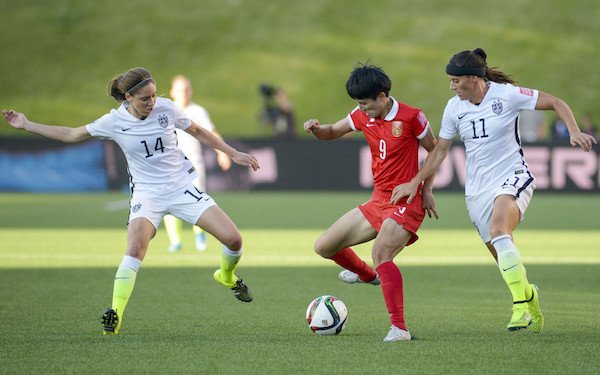 Ellis used more than 60 different players since the 2016 Olympics in Brazil, but her final team is loaded with experience -- 12 holdovers from the 2015 Women's World Cup championship team and 15 of 18 players who went the Olympics, where the USA fell to Sweden in a shootout in the quarterfinals.

Krieger started when the USA won the Women's World Cup four years, but she had not played for the USA in almost two years when she was recalled for matches against Australia and Belgium in April. She had dropped behind Kelley O'Hara and Emily Sonnett at right back, but with O'Hara battling an ankle injury and in what Ellis said was a "return-to-play mode," Krieger won out for the seventh and final spot on the backline.

"One of the things about Ali Krieger is no moment is ever going to be too big for her," said Ellis. "As a coach, when you get down to this point, there's a psychological piece is also part of the consideration when you look at players."

Short, who overcame knee surgeries in 2011, 2013 and 2014 to become a star for her hometown Chicago Red Stars and the USA's starting right back for most of 2017, finishing fourth on the team in minutes with 1,116 but her playing time dropped in 2018 when she injured her ankle in March. Only two of her nine appearances were starts, but she did get in at the end of the 2018 Concacaf Championship final.

Short was called in to all four sets of matches since then -- two trips to Europe, the SheBelieves Cup and April home friendlies -- but she didn't play a minute. Her exclusion leaves Crystal Dunn as the lone left back, though Ellis said she has other options at the position.

"We’ve played Tierna [Davidson] as a left back," she said. "Kelley has played left back probably over time more than Crystal as part of the program as well as with her club team. I think we have depth there."

Brian's selection is the shocker. Her move into midfield was one of the key decisions Ellis made to put together the winning lineup that captured the 2015 World Cup, but she has struggled in recent years.

She hardly played when she went to French club Lyon in 2018 and ended her stay less than six months into her two-and-a-half year contract, returning to play for the Red Stars. By then, she lost her starting spot in the U.S. midfield, where Julie Ertz, Lindsey Horan and Rose Lavelle nailed down the three spots. Ellis took Brian to Europe in January but she was not called in for the SheBelieves Cup or the April matches against Australia and Belgium.

Ellis said she didn't decide to take Brian until going through what she described as a "pretty thorough process" to determine from Brian and the Red Stars what was her fitness and form, Brian's experience was clearly a key factor, though.

"As much as you want to focus on the here and now," Ellis said, "you also know what someone is like -- some players don’t know ever until they're in that moment of the pressure cooker of a quarterfinal or semifinal."

Long's selection for her first World Cup at the age of 31 is somewhat of a surprise. She built on her NWSL success in Portland to make the 2016 Olympic team but in the last year her playing time has been reduced. In 2019, she has played just 39 minutes, the fewest of any player going to France. But that's still more minutes that Zerboni (38) or Sullivan (0) have in 2019 even though they were called up for every set of games.

Long gives Ellis cover in central midfield though none of Ellis' options has anywhere near the presence of Ertz and Horan, arguably the two most indispensable players on the team.

"They were very, very hard decisions to make for the last few decisions," Ellis said. "A lot of things came into play. They did everything they possibly could to make it hard."