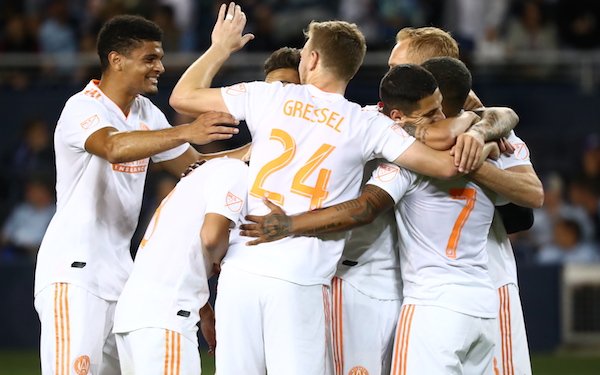 Finally, it looked like Atlanta United of old, beating up on injury-riddled Sporting Kansas City, 3-0, in MLS's only game on Sunday.

For the first time this season, the Five Stripes have won back-to-back games, and there was a huge sense of relief not present after the other two wins of the season.

They won and they played well, something that hasn't often happened this season.

"I think against Dallas we really played also really good," said Atlanta coach Frank de Boer, "but we didn’t get the reward. Now we get the reward. I’m very pleased. It was a very solid performance. We created our chances. We almost gave nothing away. We were confident on the ball. This is what you want to see, of course, from our team."

Josef Martinez, who broke the MLS single-season scoring record in 2018, doubled his 2019 production with two goals on Sunday night, while Ezequiel Barco had a goal and assist in his last game before he leaves to join Argentina for the Under-20 World Cup.

Barco could be unavailable for MLS play until the end of June just as he showing the form that made him the most expensive signing in MLS history when he was acquired from Independiente in a reported $15 million transfer in 2018.

"It’s a pity that he will leave because, okay, last year he struggled sometimes and now you really see what he’s capable of," said de Boer. "He’s getting strong, you see in one-against-ones, he’s protecting the ball well, making good decisions. It’s bad for us because you want one of your best players in form, you want to keep, of course. Others have to stand up in that moment, I have confidence in all the other ones. It’s a pity that he’s not here but we have another Pity, so he has to make the difference."

A week after his outburst in response to being substituted in the second half, Pity Martinez was back in the starting lineup and played better, though he still hasn't scored or contributed an assist in seven games.

"You cannot expect that suddenly he will play his best," said de Boer, who said he had no problem with Martinez's outburst. "It’s step-by-step, and he’s getting the rhythm of MLS and the confidence to get back and he showed already some highlights that this is the Pity that we want. He’s coming there so hopefully on Wednesday against Toronto it’s another step forward."

With Barco gone, Martinez and others will need to step up quickly. The Toronto FC match on Wednesday at Mercedes-Benz Stadium will begin a run of seven games over 25 days before Atlanta United's MLS schedule breaks for more than three weeks.

"When you play a lot of games like this back to back in a row," said keeper Brad Guzan, "it’s important to get off to a good start. But also for the confidence going into the other games, when you play well as we did tonight, you’re ready for the next one. Mentally, it becomes easier to play that amount of games in that amount of time. It’s a good start. It doesn’t mean we’re the best team in the league."