2002 U.S. World Cup star John O’Brien, now 41 and pursuing a career in clinical psychology, is enjoying the UEFA Champions League run of Ajax Amsterdam, the club he spent a decade with after leaving his Southern California home for the Netherlands at age 16. 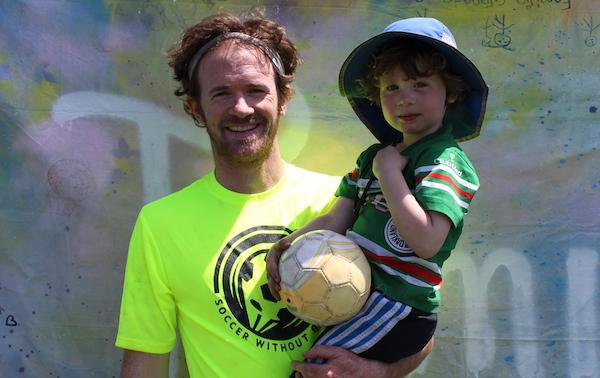 SOCCER AMERICA: How do you feel about Ajax’s chances in the second leg after winning, 1-0, at Tottenham?

JOHN O’BRIEN: I’m a little nervous, like all supporters are. Son [Heung-min] is coming back and Tottenham I think grew in confidence late in the last game.

SA: It seems like Ajax is the most popular soccer team in the world right now. Is that because it's the financial underdog? [Its player payroll is 12% of Real Madrid’s and 18% of Juventus’.]

JOHN O’BRIEN: I think it’s a combination. The money factor. The age factor. It’s a young team. Also, how they’ve been playing and who’ve they been playing. They took it to Real Madrid in Madrid. Took it to Juventus in Turin. I think there are a lot of people who just enjoy how they’ve played.

They have an almost methodical buildup that’s been able to break down these wealthier, more experienced teams. It’s been really impressive.

SA: There seem to be two sides of the Dutch school of soccer. One thinks of the fluidity of Johan Cruyff’s Total Soccer that I associate with players’ freedom more than coaching tactics. And then one hears of a very structured approach that Dutch coaches implement, limiting players to precise options. Does that make sense?

JOHN O’BRIEN: Yeah, both of those make sense. If you look at this Ajax team, there’s a lot of structure to it. Look at the way Frenkie de Jong plays. He’s always looking for lines and angles. And there’s kind of a set structure, which is all about spacing and how to make the most use of space. That’s kind of a formula. How do we make space to create more one-on-ones, especially in the wide areas?

It’s interesting to compare Dutch possession soccer to Barcelona, which has been so influenced by Johan Cruyff. In the Spanish way, there’s more movement of players around. In Holland, it’s kind of static. Moving the ball and you just kind of move a little bit this way and that way. 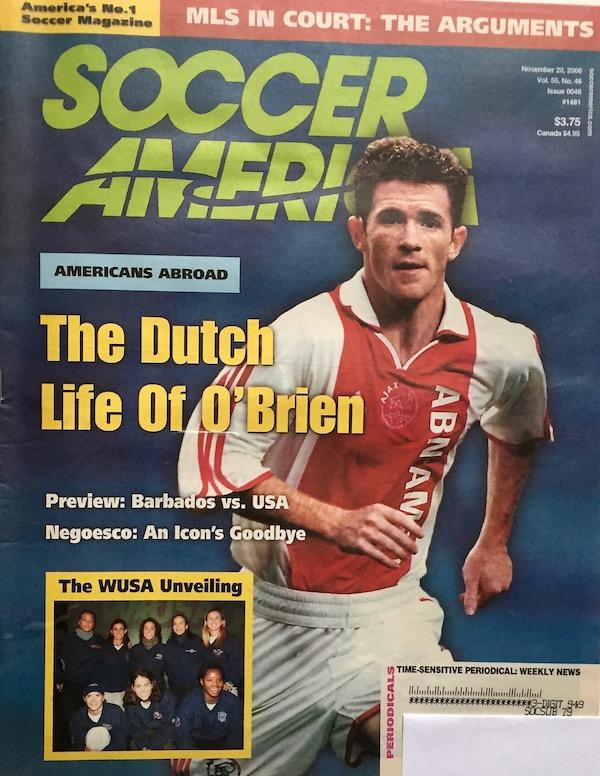 Ajax's semifinal appearance this season is its best UEFA Champions League showing since its quarterfinal appearance with John O'Brien at left back in 2003. O'Brien also won two Eredivisie titles and a Dutch Cup with Ajax.

SA: What was it like for you as Ajax player?

JOHN O’BRIEN: It was way more rigid than growing up here. The instructions were about keeping the ball moving. There was such an emphasis on passing for most players in most positions. And a couple players were like the dribblers.

There’s a lot of structure, but there is interchanging of positions. There’s definitely a structure of what each position does. In Total Football, people can change positions. If you’re a defender, through passing, you become a midfielder. And there’s an expectation that everyone can do all these different jobs. Fullbacks are really good with their feet. Daley Blind is a fantastic passer.

SA: In the last few years, U.S. Soccer has hired Dutch coaches to highly influential positions in coaching and coaching education. Do you think the Dutch model can be successfully applied to American soccer?

JOHN O’BRIEN: I’m biased. I’m a fan of Dutch soccer and like to see Dutch soccer. I think the structure can be brought in, a structure about thinking about how to develop players. That can be really useful.

But there are cultural differences. We have a country of people of all different cultural influences, and they’re going to have different takes and different ways they grew up learning things. That can be a benefit.

When I was at Ajax, we had this structured approach and the Dutch players who came up through the academy. But when we added a little bit of something different -- Maxwell, a Brazilian, and Zlatan Ibrahimovic -- they played differently, and added something different that gave us a new dimension.

That is useful to have. There can be times when Dutch teams have gotten too methodical and haven’t gone outside the box enough.

Me playing with the U.S. national team helped me.

JOHN O’BRIEN: I would leave the club, play for the U.S. national team and see a different way -- and come back to Holland and dribble a little bit more, and that would create openings.

SA: When you were playing for Bruce Arena?

JOHN O’BRIEN: Yeah, and I would take that back to Holland and it would help me at Ajax. With the national team there was a lot more freedom to do different things in our system. 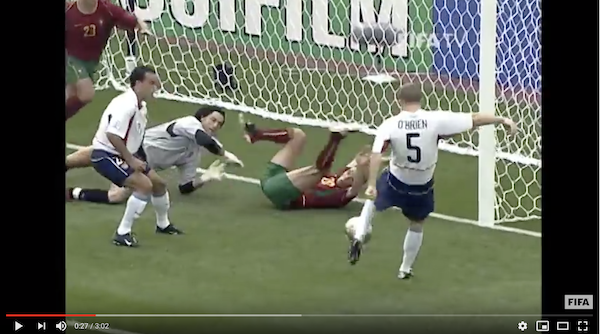 John O'Brien scored the first goal in the USA's 3-2 upset of Portugal at the 2002 World Cup, at which he played the full 90 in all five games of the USA's quarterfinal run.

SA: What was Ibrahimovic like when you played with him at Ajax?

JOHN O’BRIEN: I got to see him during a critical period when he really matured as a player. He came in and had the drive and the technical skills. But I think he was still learning how to put that in an 11v11 context. Once he figured that out, it was lights out. He was going places.

It’s amazing what he’s done with his career since leaving Ajax. Great.

[Editor’s note: Ibrahimovic arrived at Ajax at age 19 when O’Brien was 23. They started on Ajax’s 2001-02 Eredivisie championship team.]

SA: How close do you keep in touch with Ajax?

JOHN O’BRIEN: I was down in Florida when they were in camp and got to play in what was called a Legends Game. Edwin Van der Saar, who’s now president of the club, he played in goal. Two of the current assistant coaches, who I played with in Holland, Aron Winter and Richard Witschge, also played in this game. Mario Melchiot, who’s in LA making a career in film, also played. We played against Sao Paulo’s legends team.

SA: How did you feel when the USA failed to qualify for the 2018 World Cup?

JOHN O’BRIEN: Heart-breaking. I really felt for the players.

SA: What did you think about the reaction in some corners that the failure meant American soccer is in dire straits?

JOHN O’BRIEN: I think the U.S. is still a developing soccer nation and that cycle didn’t work out.

But I get excited about some the players in the national team pool. Some are doing great in the States and some doing great in other places. That’s a consistent way to measure U.S. soccer’s progress, seeing how players are doing at the club level.

SA: Speaking of young players succeeding abroad. Back then, you were an exception of a player going to Europe in his teens and making it. What are some of the keys for a young player succeeding?

JOHN O’BRIEN: There are no guarantees. You’re going into an ultra-competitive place trying to develop just like all the other best players in that area are.

What helped me was a combination. For one, it was the right fit. Because I think I’m a pretty cerebral player and being at Ajax was a place where that was really fostered and encouraged. I could kind of thrive with that. It was cerebral and technical. If I went somewhere else, where that might not have been encouraged as much, it would have been harder for me to thrive.

And having support along the way. Parents who supported me. Coaches who keep contact with me and supported me. And having that connection with U.S. Soccer, where I could come back and play with the U.S. national teams. Be connected to my roots. That was refreshing with me.

[Editor's note: O’Brien, while at Ajax, represented the USA at the U-17 and U-20 World Cups, and the Olympics, a U-23 tournament. He started all five games in the USA's fourth-place finish at the 2000 Olympics.]

SA: How important was learning the language?

JOHN O’BRIEN: That was important for my well-being. A lot of the soccer players learned just enough to get by on the soccer field. I decided if I really want to make this longer term and be happy, I have to learn the language. It’s going lot be a lot more fun. And it was.

SA: What are you up to now?

JOHN O’BRIEN: I live in Berkeley. We’ve got a 4-year-old son and a 1-year-old daughter. I finished my degree in psychology [Psy.D ] and am getting ready for the next step. I want to use what I learned in the sports world. Working on mental health in sports. Doing some performance psychology.