Griffin Yow, who in March scored the first USL Championship goal for Loudoun United in club history, struck twice for the USA in its 3-0 win over Guatemala. The victory clinched first place in Group F for the USA in the Concacaf U-17 Championship that serves as qualifying for the 2019 U-17 World Cup.

The USA, which started with wins over Canada (3-2) and Barbados (6-1), faces Guadeloupe on Thursday in the round of 16. The four quarterfinal winners will earn a spot at the U-17 World Cup.

With games every two days in group play, Coach Raphael Wicky rotated his starting lineup, making seven changes between the first two games and lining up nine against Guatemala who hadn't started against Barbados. Yow hit the post early in the first half and made it 1-0 in the 25th minute with a tight-angle shot into the far corner.

Captain Giovanni Reyna, who rested against Barbados, delivered the cross that Yow headed in to make it 2-0 in the 51st minute. Alfonso Ocampo-Chavez, a 64th minute sub, scored the final goal on a header from Seattle Sounders' teammate Danny Leyva's cross.

YOW's RISE. First called up to the U-17s last May, Yow scored in his U.S. U-17 debut, in a 3-1 loss to England in October when Coach Shaun Tsakiris was at the helm. By then Yow had joined D.C. United's academy from Virginia Development Academy, for whose U-14s he scored 19 goals in 25 games in the 2016-17 season.

During the 2017-18 DA season he trained with D.C. United's first team, with Wayne Rooney and Co.

“The first time I met him [Rooney] was crazy because you’re like ‘Wow, I’m actually talking to you,’” Yow told USSoccer.com. “As soon as you start to play with him a little bit more, you realize he’s a soccer player just like me and we’re all just here to play.”

On March 16, Yow started for D.C. United's reserve team, Loudoun United, and scored the USL Championship expansion team's first goal. Three days later, D.C. United signed Yow, whose mother Kathy, starred at North Carolina State, to a Homegrown contract. On April 21 he made his MLS debut as with a cameo as a 90th minute sub. 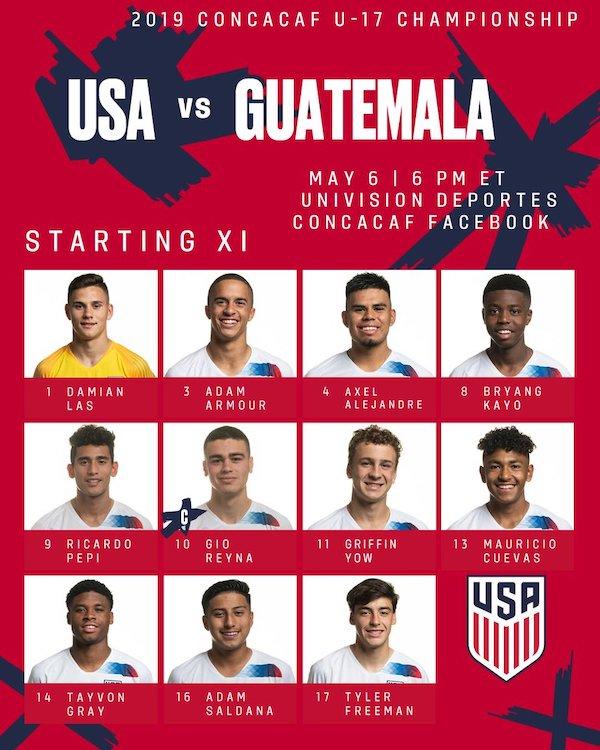 • If the USA advances, it will meet the Panama-Guatemala winner in the quarterfinals with a U-17 World Cup spot at stake. (Games are streamed live at Concacaf Facebook)