Whether based abroad or based domestically, there is no better American forward in the game right now than Andrew Wooten  and, frankly, it’s not close. And it is not simply about the number of goals he’s scored, Wooten has come up big at a time when his club, Sandhausen SV, has desperately needed him to rise to the occasion. 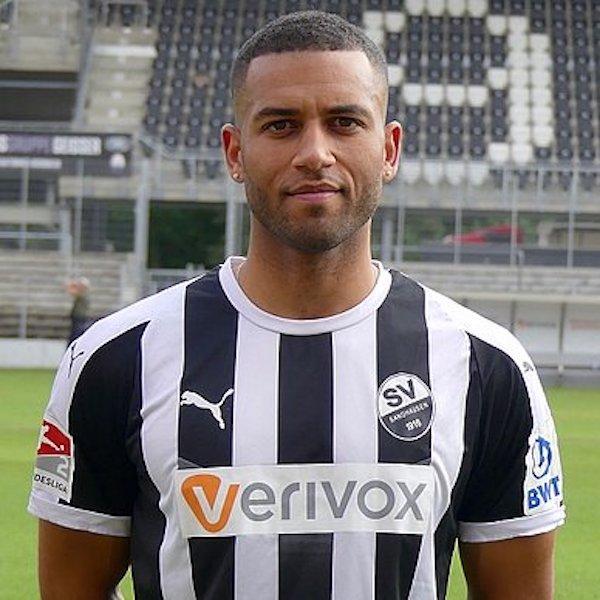 In the first week of March, Sandhausen was mired in last place of the 2. Bundesliga and seemed destined for relegation into the lowly 3. Liga. But over Sandhausen’s last 10 games, Wooten has scored 10 goals. During that stretch, he has only gotten hotter toward the end of the season. Entering into the 35th round of the season, he has scored in each of his last four games -- with six goals over that span. Most importantly, the club hasn’t lost in eight games.

With two games remaining, Sandhausen only needs a tie or a failure of Ingolstadt to win its last two games to secure its once unlikely survival. Once that happens, Wooten’s outstanding performances the past three months will be the biggest reason why the club’s fortunes turned.

“As a football player, and as a forward, you have always pressure to deliver good results and goals,” Wooten told Soccer America. “So, this was not really specific or unique. It comes with the job. But there is no question that I am thrilled I could help my team that way with important goals. But we still have to be careful as we haven’t quite secured survival and we need another result in the last two games.”

Wooten, 29, has always been regarded as a solid goalscorer. As a youth player, he scored 15 goals and 20 goals in consecutive seasons for the reserve teams of Kaiserslautern -- then in the Bundesliga. But most of his first-team league goals have been scored in the 2. Bundesliga (the lone exception being a Bundesliga goal at the tail-end of Kaiserslautern’s 2011/12 season). To date he has 53 career first-team league goals and two in the German Cup.

But now approaching 30, Wooten is having the best season of his career by far. His pair last weekend in a 3-2 win over fifth-place Heidenheim brought his season total to 17 goals, which matches Bobby Wood’s 17 goals in 2015/16 – which is a record for an American in the top two flights in Germany. But Wooten matched Wood’s total while playing over 300 fewer minutes and could surpass it the final two games. 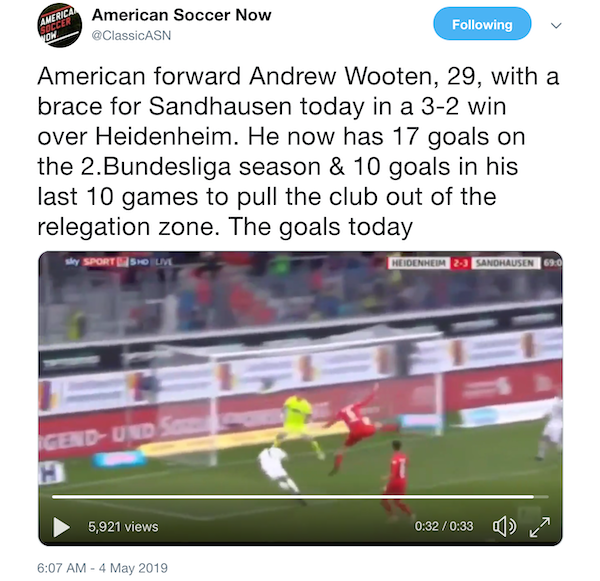 It is not entirely uncommon for some players to peak later in their careers but Wooten insists that this season is not an abnormality. Instead he attributes this season to staying fit and healthy and taking care of his body.

“The most important thing is simply to stay on the field,” Wooten discussed. “With my team, we found out the difference between this season and before. I understand what I have to do so that I can stay healthy, be consistent, and no longer have any muscle problems. So, the result is that I am now in good shape and it is easy to play good football. That's all.”

In recent seasons staying on the field has not been easy for Wooten. Regular muscle problems cost him almost the entire 2017/18 season in which he was only able to play a total of 140 minutes.

After an essentially lost season, it was a difficult time for Wooten. He underwent a series of medical tests to try to address his muscle problems. After bloodwork, Wooten’s doctors decided that he had to change his nutrition and diet. The effects were near immediate and Wooten was on the field within a month for preseason. For the entire 2018/19 season, he has had no medical problems.

“Sometimes it was very difficult for me,” Wooten said. “I was desperate because it was hard to understand. I was training and living as a footballer has to. I did everything that was recommended to me before and after the training but even then, I would get a muscle fiber crack. It was hard to understand. We couldn’t find out why it was like this. It was really difficult for me and I was really worried about this situation.”

“The big thing was to realize that the body of every player is different,” Wooten continued. “After the results of blood test, I made important changes to my nutrition to help fix the muscle problems I had. After just a few weeks, all the problems were solved. I have no problems anymore since I changed my nutrition. The problem was so easy to solve but so difficult to find out. It is really unbelievable to realize what changing nutrition can do for you.” 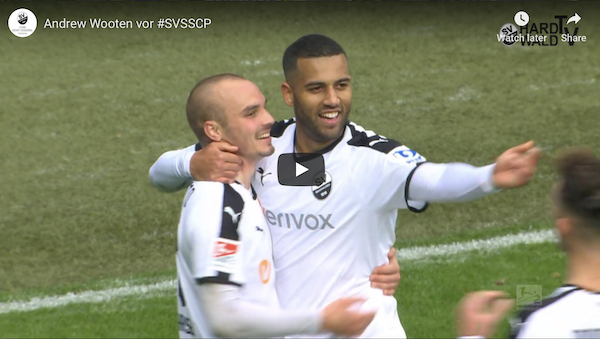 This past year has been not just a milestone and personal best season for Wooten, but it also has been one that his given him a clean slate due to his health. This is actually his second stint with Sandhausen and he has been with the club since the 2014/15 season. His contract will be over in June and he is looking for something different in the years ahead.

“I am sure I can play three or four years at this level,” Wooten said. “For me it would be perfect to play in a foreign country next season and somewhere in the top-tier league. But to score in second Bundesliga is very difficult anyway. I am really proud that I am the [fastest] U.S striker to score 17 goals in a season [in Germany]. I hope I can score the last two games too.”

Born in Germany to a German mother and an American father, Wooten has made just one appearance for the United States national team and that came as a 72nd minute sub during a 1-0 loss to Costa Rica in a 2015 friendly in New Jersey. It came during the final year of Jurgen Klinsmann’s tenure as head coach and it was a tumultuous time for the team.

While many of the newcomers to the U.S. team in recent years are teenagers or barely into their 20s, Wooten wants to break that trend and is hoping his return to health and impressive form gets him a long look from new manager Gregg Berhalter as he builds towards the 2022 World Cup.

“Sometimes I was thinking that if you score a lot of goals you can always hope that you will get another chance in the national team,” Wooten said. “If they need me, I am prepared. My target is still to play a World Cup with U.S. team.”