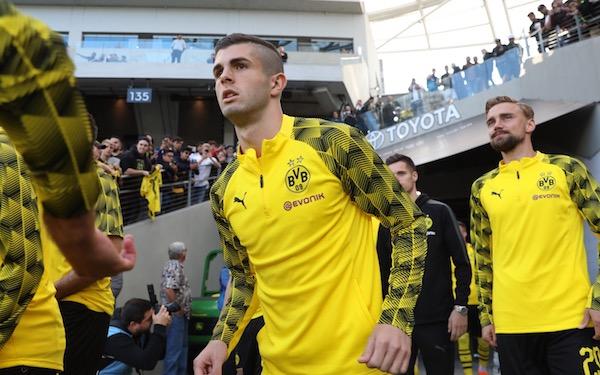 Play is winding down in Europe's major leagues. It's the last week in the Premier League and next to last week in the Bundesliga. Americans are already starting promotion playoffs in the second and third tiers of English soccer. In MLS, two matchups feature conference rivals off to strong starts.

The weekend is also critical for Americans seeking to go to the Gold Cup. Jozy Altidore should return to action for Toronto FC though several players projected to start for the U.S national team are injured.

With that in mind, here are the 10 best games to follow this weekend from an American perspective.

Christian Pulisic will play his last game in front of the "Yellow Wall" before leaving for Chelsea when for Borussia Dortmund hosts Fortuna Duesseldorf in a must-win game at the Signal Iduna Park.

Pulisic had one of his best games of the season last week at Werder Bremen but Dortmund blew a 2-0 lead and had to settle for a 2-2 tie that dropped it four points behind Bayern Munich with two games to play.

Dortmund's only realistic chance of overtaking Bayern is if it wins its last two games and Bayern does no better than earning one point in its last two games against RB Leipzig on the road and Eintracht Frankfurt at home next week. Bayern's far superior goal difference will give it the edge in the event of a tie on points.

Tyler Adams remains sidelined for Leipzig, which is unbeaten in its last 17 games. Of note: U.S. U-20 defender Chris Richards trained with the Bayern first team this week.

The Union heads to Toronto in a three-way tie with D.C. United and Montreal for the Eastern Conference lead. TFC is in fourth place, four points behind but with two games in hand on the Union and D.C. United and three on the Impact.

Philadelphia is much improved since it lost to Toronto FC at home, 3-1, in their season opener in March, though TFC should have Altidore available after a three-game layoff with a hamstring strain. Also probable for the Reds: center back Drew Moor.

FC Dallas will say good-bye to Edwin Cerrillo, who played his way on to the U.S. U-20 World Cup team with a tremendous start to his rookie season, and Brandon Servania after the match against the Red Bulls. They will depart on Monday to join the U.S. U-20s, who are preparing for the world championship in Poland.

Paxton Pomykal, who has been injured, will be available for a rare back-to-back series against LAFC next week and join the U-20s on May 20, just four days before the opener against Ukraine.

The Red Bulls have just three wins in 10 games and sit in 10th place in the Eastern Conference but are only three points below the red line. The 2-1 loss to Montreal on Wednesday was costly as U.S. national team defender Aaron Long limped off late in the game with a hamstring injury. He's listed as questionable for the Dallas game.

American Ventura Alvarado captained Necaxa to a 1-0 win over Monterrey in Aguascalientes in the first leg of the Torneo Clausura quarterfinals on Thursday. Another good performance by Alvarado could put him in contention for a spot on the U.S team for the Gold Cup with starters John Brooks and Long both currently injured.

Jonathan Gonzalez, who was not released by Monterrey for the Under-20 World Cup, did not play in the first leg for Los Rayados, who played the last 51 minutes with 10 players and subbed off several attacking players to get ready for the second leg.

After starting out with a 7-1-1 record, the Galaxy has lost its last two games to the Red Bulls (3-2) and Columbus (3-1). It returns home to face a third straight Eastern Conference team. NYCFC is unbeaten in its last six games, relieving the pressure on second-year head coach Domenec Torrent.

The game could mark the return of 17-year-old Julian Araujo, who was a late cut from the U.S. U-20 World Cup team. He has been training with the Galaxy after being injured at Minnesota United on April 24 and he will be needed as right back Rolf Feltscher is out with a toe injury.

The Sounders (5-1-4) and Dynamo (6-1-1) have two defeats between them. Seattle has kept up where it left off last season but Houston has been a big surprise.

The Dynamo has never won in 12 meetings with the Sounders in Seattle (0-9-3 all-time) but comes into CenturyLink Field with the top young attack in MLS with Mauro Manotas, Alberth Elis and American Memo Rodriguez, who have combined for 13 goals and eight assists. 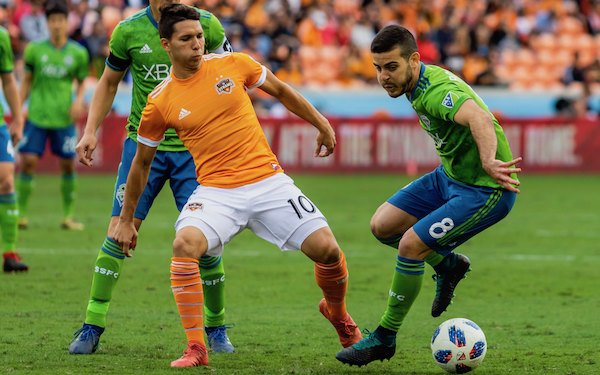 The four-team English Championship promotion playoffs begin with the first leg of the semifinals. Derby sealed a berth in the top six in the regular season finale, but the 3-1 win over West Bromwich was costly as American Duane Holmes had to leave the game with a cramp shortly after the hour mark.

Holmes had been sidelined with a thigh strain, and Derby manager Frank Lampard said it was a "big ask" for the winger to play against West Brom. His availability for the first leg against Leeds United won't be known until shortly before the match.

Sunderland dropped to fifth place in League One after a 2-1 defeat to Southend United on the final day of the regular season and enters the promotion playoffs with just one win in its last seven games.

Much of the wrath of Black Cat supporters was directed at U.S. international Lynden Gooch, who had a terrible game against Southend United.

Ethan Horvath's Brugge needs to beat Genk to keep its slim hopes of retaining its Pro League title alive. Genk enters the game with a six-point lead and three games to play in the championship round being contested by the top six teams from the regular season.

Horvath should keep his spot in the U.S. goalkeeping corps for the Gold Cup with his performance in the championship round: five shutouts in seven games and a 5-1-1 record.