The USA opened final preparations for the Women's World Cup with a labored 3-0 win over fellow finalist South Africa. The Banyana Banyana sat back all game and did a good job of containing U.S. pressure until they tired in the last quarter of an hour. With still more than four weeks to go before the USA opens play against Thailand in Reims, Coach Jill Ellis worked on getting as many players as possible extended minutes and using players in the multiple roles they might play in France. 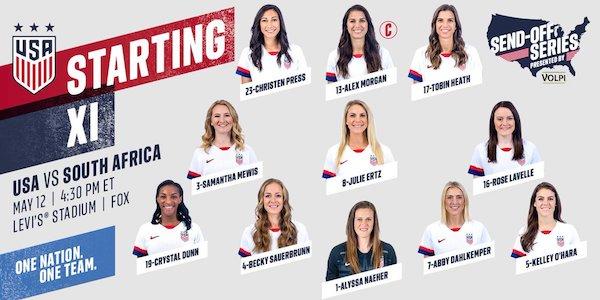 Alyssa Naeher had little to do to collect her second shutout of the year. The most dangerous South Africa chance came late in the first half when Sibulele Holweni tried to catch Naeher off her line, but her long attempt went wide of the goal.

Kelley O'Hara returned to the starting lineup for the first time since the SheBelieves Cup and was a constant presence in the U.S. attack, coming close on a lobbed attempt early in the game. Crystal Dunn started out at left back, moved to right back and then finished the game in midfield though she did not make her presence as felt as she is capable of. Abby Dahlkemper and Becky Sauerbrunn had little to do against a South African attack that rarely got near the U.S. penalty area.

With Lindsey Horan sidelined with a hip injury, Sam Mewis got the start alongside Julie Ertz and Rose Lavelle in midfield and was the star of the game with its first two goals. She moved to her left and then to her right to score the first goal from outside the area and got on the end of a cross from Megan Rapinoe in front of the goal to score the second goal. A foot save by backup South African keeper Kaylin Swart denied Mewis a hat trick. Ertz, who played with a giant wad of gauze in her mouth to stop the bleeding from a cut, moved to center back in the second half while Lavelle, who set up Mewis' first goal, exited after 60 minutes.

The U.S. attack saw plenty of the ball but they struggled to get themselves in good positions and break down the South Africa backline. Christen Press got the start in place of Rapinoe and had lots of room to work with but created few good opportunities. Tobin Heath's best chance came right before the end of the half when she went off but it was stopped at the near post by keeper Andile Dlamini. Indicative of the U.S. problems in the first half was Alex Morgan's quiet performance.

Three subs were made to start of the second half: Megan Rapinoe came on for Heath, Allie Long replaced Dahlkemper and took Ertz's spot at holding midfielder and Tierna Davidson replaced O'Hara and played at left back. Rapinoe set up Mewis' second goal, playing a quick free kick, and also crossed the ball into the middle when Mallory Pugh fed Carli Lloyd for her 108th career goal, which moved her past Michelle Akers into fourth place on the U.S. all-time scoring list.

TRIVIA. Mewis and Lloyd are now tied with Heath, Morgan, Pugh and Rapinoe for the U.S. scoring lead in 2019 with three goals apiece.