The USA advanced to the final of the Concacaf U-17 Championship with a 4-0 semifinal win over Canada on Tuesday. Similar to its 3-0 quarterfinal win over Panama that clinched a 2019 U-17 World Cup spot on Sunday -- and its 3-2 win over Canada 12 days ago in its tournament opener during which it trailed 2-0 at halftime -- the Americans on Tuesday improved significantly in the second half. In the end, the USA outshot the Canadians 26-6. 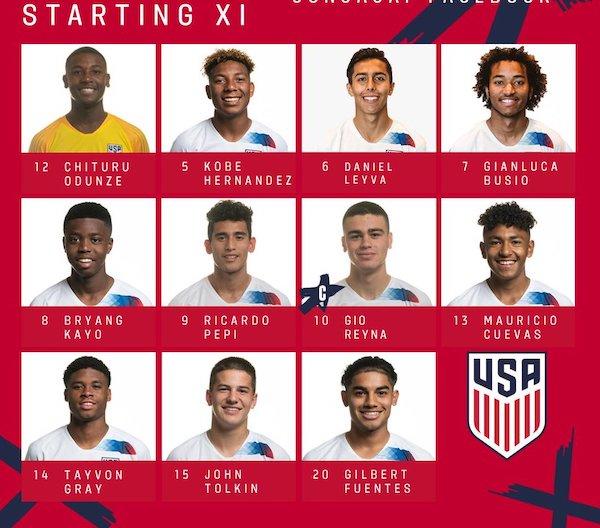 The 6-foot-6 Chituru Odunze came out of the penalty area to clear a Canadian pass with a diving header shortly after the kickoff. Far less spectacular responses were required to stop Canadian shots, which went straight to him.

DEFENDERS
Mauricio Cuevas' persistent forays down the right flank led to an early chance and contributed to the Canadians' being stuck in their own half for most of the game. The central defense tandem of Tayvon Gray and Kobe Hernandez-Foster, the USA's most frequent ball-winner, overmatched the Canadian attackers. Left back John Tolkin served mainly to spare Gio Reyna of defensive duties.

Gio Reyna, who attacked mainly from the left wing, missed badly -- high and wide from six yards -- on the USA's first clear chance in the 12th minute and skied a longer-range shot in the 21st minute. The poor shooting continued with Gianluca Busio's mis-hit from 14 yards in the 26th minute. It was Bryang Kayo who finally ended the USA's frustration when he darted through the middle on the dribble and made it 1-0 with an 18-yard shot within two minutes of the second-half kickoff. Reyna, who had eight shots on goal, finally found his groove in the second half. After taken down roughly outside the penalty area, he drilled a 28-yard free kick into the net to make it 2-0. Busio assisted on the USA's final two goals. Gilbert Fuentes combined with Cuevas keep the right flank under U.S. control. Sitting in front of the backline, Danny Leyva saw little of the ball.

Missing from the USA's play for most of the game was the ability of the midfield to combine with the frontline. That got much better after Canada went behind, was forced to attack, and its defense no longer constantly outnumbered the U.S. attackers. In the 78th minute, Busio robbed Canada's Tomas Giraldo deep in the Canadian half and fed Ricardo Pepi, who beat Canada's keeper and two defenders to stroke home the third goal. Four minutes later, Pepi ran on to Busio's through ball down the middle and struck smoothly to make it 4-0.

SUBSTITUTES
Adam Armour replaced Tolkin at outside back, Adam Saldana came in for a banged up Kayo while the USA was leading, 2-0, and Alfonso Ocampo-Chavez replaced Pepi after his second goal.

TRIVIA. The USA finished second to Mexico at the 2017 Concacaf U-17 Championship, falling on a PKs after a 1-1 tie. Mexico has won the last three Concacaf U-17 titles since the USA lifted the crown in 2011.