Mexico won its fourth straight Concacaf U-17 Championship with a 2-1 overtime victory over the USA, which paid the price for missed chances during its first-half domination. After Griffin Yow gave the USA an early lead, Mexico equalized thanks to two USA products. Californian Efrain Alvarez delivered a perfectly lofted pass that Texan Santiago Munoz headed home. The 1-1 halftime score flattered the Mexicans, but they improved significantly in the second half and delivered the coup de grace with a swift counterattack early in the second overtime period. Both Mexico and the USA, plus semifinal losers Haiti and Canada, qualified for the 2019 U-17 World Cup. 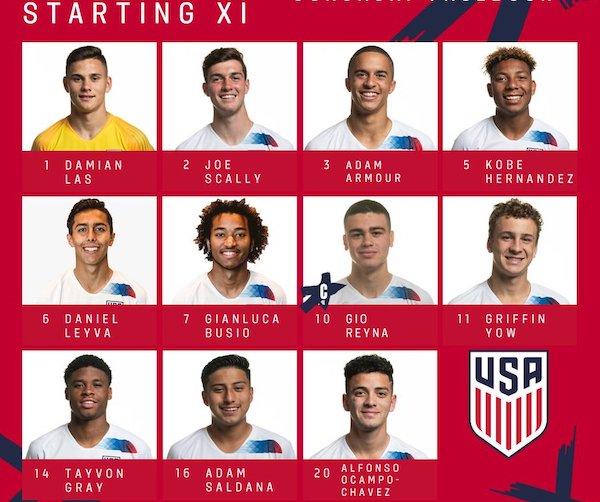 Damian Las had little time to react to Mexico's first goal, but the gamewinner bounced in off his thigh on a shot he may have been able to kick away had he stayed on his feet.

Tayvon Gray lost track of Munoz as Alvarez's pass floated over his head but made amends by assisting on the USA's goal. The U.S. backline stifled the Mexicans for much of the game, with right back Joe Scally winning battles against Bryan Gonzalez and the Gray-Kobe Hernandez-Foster central duo preventing close-range opportunities by Mexicans for most of the game. But both Scally and Hernandez-Foster had a chance to interfere on the winning goal but failed. Adam Armour's fouls were nearly costly. One gave Mexico a free kick that lead to a shot off the crossbar.

Adam Saldana and Danny Leyva get credit for the USA's edge in possession as they disrupted several attacks and both were smart with the ball. Levya also managed to surge forward without compromising his defensive duties. Two of Gianluca Busio's shots were deflected onto the post by Mexican goalkeeper Eduardo Garcia, but with nine shots on goal, Busio should have done better. Busio from central midfield, along with Gio Reyna on the left wing, orchestrated much of the USA's attack during a first-half performance that made it look like the USA was headed toward a victory. But both faded later in the game and their missed chances ended up being the difference between first and second place.

Gio Reyna squandered the USA's biggest chance, hitting the crossbar from seven yards after receiving the ball totally unmarked in the 34th minute. Alfonso Ocampo-Chavez, who set up the big Reyna chance and a good opportunity for Busio, had just one shot on goal, which hit the side-netting. Griffin Yow's anticipation put him in the right spot to pounce and head in the USA's goal. His only other shot flew high from long range.

Coach Raphael Wicky waited rather long to use subs in the 120-minute game. Not until the second overtime did he make his last two changes. Ricardo Pepi added some spark to the U.S. frontline but late in overtime he shot to the Mexican keeper from a narrow angle instead of delivering a pass. Tyler Freeman had a long-range shot that went straight to the keeper.

TRIVIA. After eight USA-Mexico meetings in the Concacaf U-17 Championship, the USA has won once, a 4-3 win during the group phase in 2017.