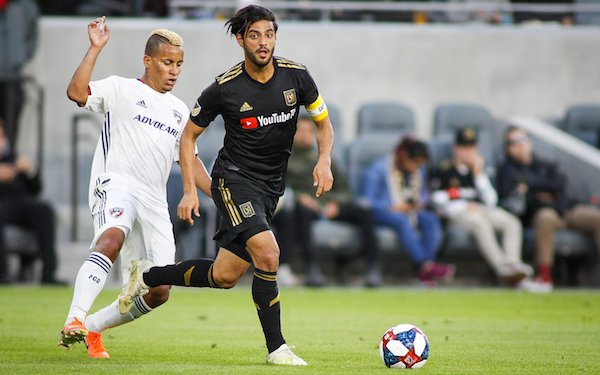 His national team career likely over, Mexican star Carlos Vela can concentrate on playing for LAFC, where he is having an MVP season.

Vela scored his 13th goal in 13 games for LAFC and assisted on Diego Rossi's late goal to give LAFC a 2-0 win over FC Dallas that extended the second-year club's lead in the Supporters' Shield race to five points.

Vela's goal-a-game average puts him on course to break Josef Martinez's record of 31 goals in 2018 for Atlanta United. He's already surpassed the 2018 MLS MVP's total of six assists with his seventh of the season on Rossi's goal.

Vela, 30, went to the 2010 and 2018 World Cup but refused to go to the 2014 tournament. Martino said Vela told him he was turning down a call-up to the Gold Cup because his family and club came first. Vela told reporters he also wanted to give other players a chance.

"I've had my opportunities," Vela said the next day. "I've played a lot of games with the national team and nothing extraordinary has happened with Carlos Vela playing. We have to give others a chance. There are young players that will reach the World Cup."

LAFC coach Bob Bradley said Vela has set the standard for LAFC with the mentality he has brought to every game, his willingness to create chances for himself but also his unselfishness.

"I also think he’s been a big part of us trying to work as a team to win the ball back," he said, "so we still play our best when we lose the ball and the attackers are quick to get after the other team. For him, he’s set the standard and I think everybody else see’s it.”

But teammate Mark-Anthony Kaye said that Vela has a target in his back. Vela told Bradley after the FC Dallas game he was lucky to get off the field without a broken leg for the second week in a row. Bradley said FC Dallas defender Bressan should have been red carded for his foul in stoppage time.

Vela said he is feeling good and enjoying the moment with LAFC but he is worried.

"Football is a contact sport," he said, "but I don’t say anything if it’s fair play or a 50-50 ball. But this case was not like that. That’s not a way to play. You have to be worried, not just for me but any other soccer player. We’re all in the same business and we have to be smart."

mls
1 comment about "Carlos Vela's success at LAFC comes at a price -- he has target on his back".
Next story loading